The justices hear oral arguments Nov. 6 in litigation that poses a critical question: How far does the Clean Water Act go?

The dispute focuses on Maui disposal wells that send treated wastewater underground toward the Pacific Ocean, where it drifts among the island’s prized coral reefs. The impacts of the case could extend far beyond Maui, affecting the reach of a national permitting system.

“The case illustrates so many issues that are not clearly resolved in the existing Clean Water Act, yet they’re really fundamental to how the act’s going to operate,” said University of Maryland professor Robert Percival, who tracks environmental issues at the Supreme Court.

The county and its allies in the Trump administration are pushing the justices to set tighter limits for when polluters need federal permits.

The Hawai’i Wildlife Fund and other groups that filed the underlying case say that interpretation would undermine water protections and run counter to how the Environmental Protection Agency and others have understood the law for decades.

The disagreement centers on the text of the Clean Water Act, which requires federal permits when distinct “point sources” pollute federally regulated rivers, oceans, and other surface waters.

The Maui disposal wells in the case are classic point sources, and the Pacific Ocean is an undisputed federal waterway. The sticking point is what happens in between: Before reaching the sea, Maui’s treated sewage mixes with groundwater, which is regulated by the state, not the federal government.

The pollution doesn’t need a federal permit because it doesn’t flow directly from a point source to federal waters, Maui says. The Trump administration says that once a pollutant touches groundwater, it’s beyond the scope of federal permitting, no matter where that pollutant ends up.

That’s a change from the position the EPA staked out in decades of regulatory decisions and during lower court proceedings in 2016, under the Obama administration, when it supported Hawaii environmentalists against the county.

Energy companies, Republican-led states, and homebuilders are lining up behind Maui. Its allies also include the liberal cities of New York City and San Francisco.

“Some might say that we are siding with the polluters, but we would maintain that we think the states can and are doing an adequate job of protecting the groundwater,” said West Virginia-based lawyer Jesse Richardson, who represents groundwater professionals and the private water-well industry on Maui’s side.

Karen Harned, who heads the National Federation of Independent Business’ Small Business Legal Center, said a win for the environmental groups would expand the EPA’s jurisdiction.

“I think the jury’s somewhat out about what the effect would be here,” he said.

“A polluter, to avoid regulation, could simply cut off their pipe a few feet short of the shoreline and dump those pollutants into that river, that lake, that ocean, and completely be without control,” said Earthjustice lawyer David Henkin, who is arguing the case for the environmental groups.

Percival, the professor, noted that when the U.S. Court of Appeals for the Ninth Circuit ruled for environmentalists in the Maui case in 2018, it recognized limits on the legal theory.

The court determined the county should have sought federal permits, but reached that conclusion only after determining the Pacific pollution was “fairly traceable” to the county’s wells—a link established through tracer dye studies.

Before the Trump administration changed course, the EPA applied a “hydrologic connection” test, requiring federal permits only when pollution flows into groundwater with a direct path to surface water.

The Maui case traces its roots back more than a decade. 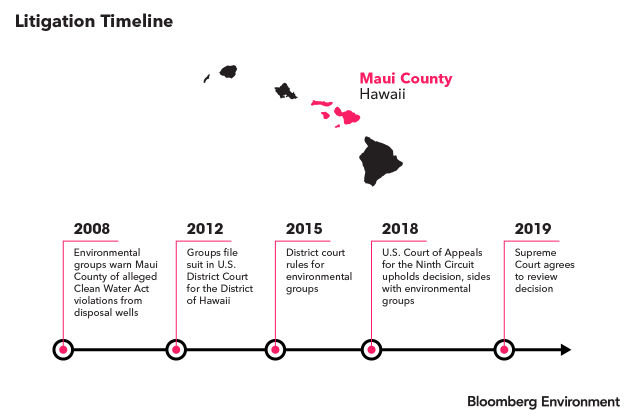 Local environmental groups first raised red flags about the county’s wells in 2008. The legal showdown began in 2012 and then inched through the courts, with settlement talks failing along the way.

“It’s definitely a situation where the community groups we’ve been working with expected that their county government was going to be more responsive to addressing the harm to the reef, and did not expect that we were going to have to litigate this up to the highest court,” Henkin said.

“There has been uncertainty on this for probably 30 years, but it didn’t really bubble up to the surface until maybe five years ago, and then it started to become an issue,” said Richardson, the lawyer for groundwater professionals.

For all the hype around the Maui case, it almost didn’t happen—and could still be sidelined before a decision.

Maui lawmakers recently voted to settle the case and withdraw it from the Supreme Court, but the county’s mayor refused to implement the deal. Settlement backers are now using legislation and a local lawsuit to try to overcome the blockade. If successful, they could knock the case from the Supreme Court’s docket before a ruling.

But, Liebesman noted, other cases raising the same Clean Water Act question are pending before the Supreme Court and lower jurisdictions.

“There’s a lot of momentum for the court to address this kind of issue right now,” he said, and there could be other opportunities. “I don’t see the issue going away at all.”