Lawmakers have been laying the groundwork for months to come up with solutions to a growing headache for water providers in all corners of the U.S.

House members are meeting today to discuss a strategy for moving through Congress over a dozen bills on pollution from poly- and perfluoroalkyl substances (PFAS)—chemicals linked to thyroid and liver problems, cancer, and immune system deficiencies.

The problem is enormous.

Since 1949, manufacturers have used thousands of different PFAS chemicals in everything from fast-food wrappers to nonstick pans to fire-extinguishing foam. The chemically stable compounds resist heat and accumulate easily in humans and animals.

More than 99% of Americans have PFAS in their blood, according to the Environmental Protection Agency. And water utilities are spending millions to reduce the amount of the compounds in their drinking water sources.

“Every bit of delay is threatening to the public health and well-being of the American people,” said Rep. Paul Tonko (D-N.Y.), who as chairman of the House Energy and Commerce subcommittee on environment and climate change is presiding over the May 15 hearing.

Some lawmakers are working to learn more about the particular issues with PFAS in each other’s districts.

Some see the legislation being attached to a must-pass appropriations bill or Department of Defense authorization bill. The last two National Defense Authorization Acts provided funding for a nationwide study on the health effects of PFAS. The Pentagon could be on the hook for millions of dollars in cleanup costs because of the widespread use of PFAS-containing foam at bases across the country.

“Every single avenue that is a possibility, we’re going to pursue every single one of them,” Fitzpatrick, who is co-chairing the bipartisan Congressional PFAS Task Force with Kildee, told Bloomberg Environment. “It’s my top environmental priority right now.”

Others, like Rep. Debbie Dingell (D-Mich.), envision a larger, PFAS-related package that will pass the House. Dingell says she has the backing of the top members of the House to pass something on PFAS. 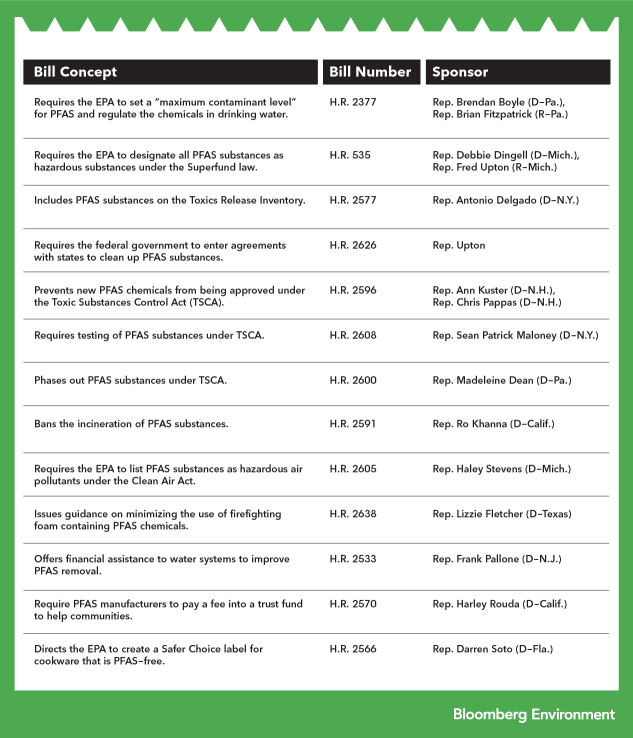 The 13 bills up for consideration at this time fall in three areas, said Scott Faber, senior vice president of government affairs for the Environmental Working Group. Some, like a measure from Rep. Antonio Delgado (D-N.Y.) to add the chemicals to the Toxics Release Inventory, address the need to monitor PFAS in the environment and in humans.

Others seek to ban the chemicals altogether.

A third group of bills tackles the cleanup.

And the House fiscal 2020 spending bill would set aside $18 million for studying PFAS, more than double current spending levels.

The situation reminds Faber of the concerns over polychlorinated biphenyls (PCBs), another persistent and ubiquitous pollutant linked to cancer and reproductive effects.

“We know we have a contamination crisis,” Faber said. “We just don’t know how big it is.”

On the Senate side, Democratic Sens. Debbie Stabenow (Mich.) and Jeanne Shaheen (N.H.) proposed several bills each to address the problem.

Sen. Tom Udall (D-N.M.) introduced legislation (S. 675) that would authorize the Pentagon to offer PFAS-free water to agricultural operations near military bases where contaminated groundwater has been found. A spokeswoman for Udall said the office has not ruled out attaching the bill to a larger package.

Udall, a member of the Senate Appropriations Committee, also wants to increase funding for cleaning up PFAS in the Pentagon’s spending bill, the spokeswoman said.

The EPA released a PFAS action plan in February, in which it said it was developing a drinking water standard called a maximum contaminant level for two of the most prevalent PFAS chemicals—PFOA and PFOS, two molecules with long chains of fluorine and carbon atoms that have been studied for years. The agency also said it would work toward designating those chemicals as hazardous substances under the Superfund law.

One of the bills, H.R. 2377, would go further than the EPA and establish a limit for all PFAS chemicals. Another, H.R. 535 (S. 638 in the Senate), would extend the hazardous substance designation to all PFAS.

Short-chain PFAS chemicals, those with less than eight carbon atoms, are generally less toxic and less bioaccumulative in wildlife and humans, according to the EPA. But only scant research exists on the short-chain chemicals, which chemical manufacturers began to sell as replacements for PFOA and PFOS.

Legislators may also be evaluating whether it would be better to set a maximum contaminant level or develop a technology standard to limit these contaminants, said Betsy Southerland, who oversaw science and technology issues in the EPA’s Office of Water before retiring.

Requiring the EPA to identify technologies that could remove both the older and newer long-chain and newer short-chain PFAS could be a more effective way to control PFAS then requiring the agency to set a drinking water standard for each one, said Southerland and Carl Reeverts, former deputy director in EPA’s Drinking Water Protection Division.

At the very least, the members expect to bring more attention to the problem.

“A year or so ago most people had no idea what PFAS was,” Rep. Fred Upton (R-Mich.) said.