Last month, millions of people around the globe gathered to protest what they consider a dangerous lack of vision among nations and industries when it comes to combating global warming, and the burning of fossil fuels that causes it.

Chief among those singled out were the companies that have, for the better part of a century, profited from the sale of coal, oil and gas. U.S. cities, states and environmental groups have turned to the courts in recent years, hoping to punish these energy giants through litigation. Specifically, they allege that executives hid their knowledge of humanity’s role in climate change while casting doubt on those who raised the alarm.

A major test of this strategy gets under way on Tuesday in Manhattan, as New York’s attorney general squares off against Exxon Mobil Corp. in a three-week trial.

Environmentalists have hailed the case as the first of its kind, but that label comes with a caveat. Instead of seeking to lay the blame for a planetary crisis at the feet of oil companies, the trial will instead focus on something more mundane: whether Exxon cooked its books when it came to internal financial projections that incorporate the cost of global warming.

The narrower legal claims haven’t dampened the hopes of Exxon’s detractors. “The significance of the litigation can’t be overstated,” said Lindsay Meiman, a spokeswoman for the environmental group 350.org, which plans to protest outside the courthouse. “It highlights a pivotal moment when the people are trying to get big polluters to pay for their destruction.”

In the four years since New York first opened its investigation, the issue has become significantly more fraught. Scientists have since discovered that the Earth is warming faster than expected, replete with rising seas and unprecedented wildfires. The world’s oceans, which hold much of the carbon dioxide emitted by mankind, are not only warming—fueling floods and catastrophic storms—but also acidifying. Half of the planet’s coral reefs, the nurseries of sea life critical to the underwater food chain humans rely on, are now dead.

Estimates of the amount of money required to slow climate change—money that would fund a radical shift in how civilization functions—are in the tens of trillions of dollars. Additional expenditures required to acclimate society to the damage already done would total trillions of dollars more. Someone, either taxpayers or companies or both, will have to pay. 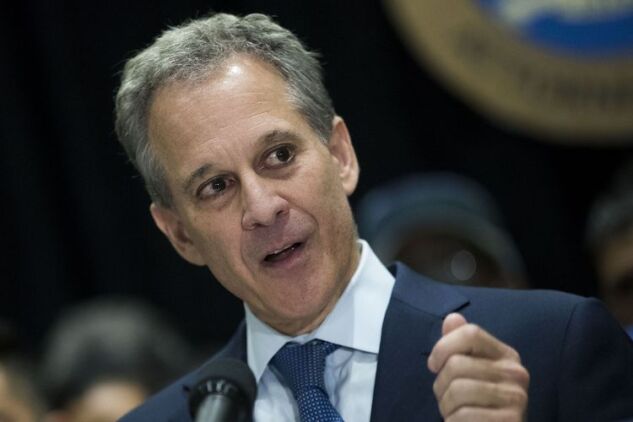 New York’s probe, which in late 2015 made it a leader in the so-called #ExxonKnew battle, followed reports by Inside Climate News and the Los Angeles Times alleging that Exxon’s own scientists discovered as far back as 1977 that man-made emissions were damaging the climate—and that the company covered it up. Exxon has denied the claims.

Then-New York Attorney General Eric Schneiderman’s investigation gained momentum when Massachusetts started its own inquiry in March 2016. Massachusetts Attorney General Maura Healey soon joined Schneiderman, former U.S. Vice President Al Gore and several other Democratic state attorneys general to announce a national effort to address the climate crisis. In a speech, Schneiderman touted his Exxon probe and suggested others like it were on the horizon.

“With gridlock and dysfunction gripping Washington, it is up to the states to lead on the generation-defining issue of climate change,” he said at the time. “Our offices are seriously examining the potential of working together on high-impact, state-level initiatives, such as investigations into whether fossil fuel companies have misled investors about how climate change impacts their investments and business decisions.”

Greenpeace said at the time that New York was “leading the charge to further expose the hypocrisy of fossil fuel companies,” and urged other states to follow suit. But the wave of state probes never materialized, leaving New York and Massachusetts to go it alone. And Schneiderman never got to finish his own investigation. He resigned in May 2018 following allegations of abuse by several women. It was up to his successors to pull the trigger on Exxon. 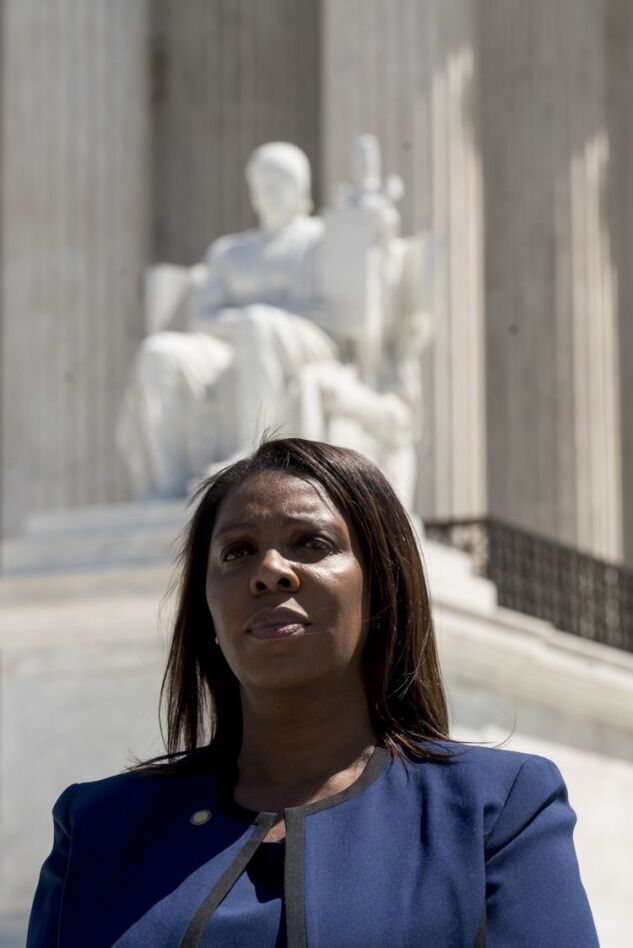 Then-Acting Attorney General Barbara Underwood sued the fossil fuel company last year, before current New York Attorney General Letitia James was elected. In the complaint, the state alleged Exxon had committed securities fraud by misleading investors about the way it accounted for the future financial impact of climate change on its business. New York argues that the energy giant inflated its long-term value and stock price by downplaying the risks posed by tightening regulation, as well as an expected decrease in demand for fossil fuels.

Exxon, which rejected the allegations and denied any wrongdoing, has long maintained that the New York lawsuit is a politically motivated effort to demonize the multibillion-dollar company.

“This case is not about climate change, climate science, or climate policy,” Exxon lawyer Theodore Wells said in court papers this month. “It is also not about whether Exxon Mobil considers climate risks in its long-term business planning. Exxon Mobil indisputably considers those risks.”

At the heart of the case is Exxon’s use of a so-called proxy cost for carbon in its annual calculations predicting global energy demand, as well as its use of a greenhouse gas (GHG) metric to account for expected climate taxes tied to specific projects. Such figures have become a common way for fossil fuel companies to show investors and regulators that they’re incorporating the additional costs faced by long-term projects, and the potential decrease in value of untapped reserves as alternative energy sources proliferate.

New York alleges that Exxon’s management, including former Chief Executive Officer Rex Tillerson, knew for years that the Irving, Texas-based company was deviating from its public claims by using two sets of proxy figures—one private and one public.

Put simply, New York claims investors were told that the true cost of climate change and related regulations were baked into Exxon’s financial projections, when in fact the company was lowballing those numbers.

“By representing that it was applying higher projected carbon costs than it was actually using, Exxon Mobil made its assets appear significantly more secure than they really were, which had a material impact on its share price,” New York said in an Oct. 7 court filing. “In doing so, Exxon Mobil defrauded its investors.”

Suing under the state’s powerful Martin Act, the New York attorney general’s office claimed that Exxon’s shareholders suffered damages of at least $476 million, and as much as $1.6 billion when the oil company’s allegedly bogus proxy figures were exposed by New York’s probe, according to court filings. 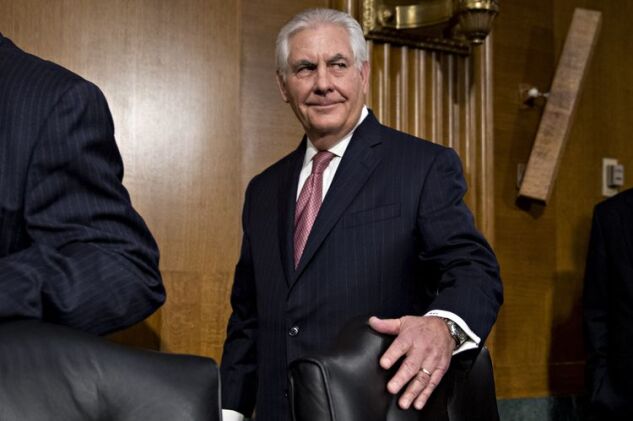 The trial is likely to feature testimony from Tillerson, who subsequently served as U.S. secretary of state under President Donald Trump before being fired. He’s on the witness list for both sides.

Exxon has balked at New York’s claims. The company argues its proxy costs and GHG costs are separate metrics that have different internal purposes, and were never presented to investors in the way New York alleged. In short, Exxon contends New York is conflating the two figures to show a discrepancy where there isn’t one. It also argues that, because the figures are used for internal investment decisions, false numbers would hurt only the company—not its shareholders.

“If anyone would have been misled by the use of inaccurate GHG cost assumptions, it would have been only Exxon Mobil itself,” Wells said in court papers. “But Exxon Mobil had no reason to deceive itself into making bad investment decisions.” Tillerson has also denied any wrongdoing.

The New York case, though a potential landmark, is an outlier when it comes to the types of legal strategy being employed against Big Oil. A growing number of so-called nuisance lawsuits have been filed by local governments against energy companies, cases that seek to compensate taxpayers rather than shareholders. If they survive efforts by defendants to derail them, that litigation could indeed lead to the wave of cases Schneiderman predicted. On Monday, Rhode Island joined the existing plaintiffs, suing major oil companies including Exxon in state court in Providence under the nuisance theory.

Ann Carlson, a law professor at the University of California at Los Angeles who’s done consulting work for cities involved in such litigation, said the nuisance battles are at an early stage, with energy companies fighting to move the lawsuits to federal venues, which are traditionally more accommodating to defendant companies.

While different, the New York lawsuit is nevertheless significant to the efforts of nuisance litigants because it could demonstrate a pattern of deceptive behavior by Exxon, and publicize the allegations of the plaintiffs, Carlson said.

“The more evidence that comes out about oil companies engaging in misleading and deceptive behavior, whether about their own risk or the bigger risks from climate change, their political position weakens even further,” she said. “It gets easier to think about stronger regulation of oil companies.”

“Whatever comes up during this month’s trial in New York could certainly be used by other public prosecutors and potential plaintiffs against Exxon Mobil in the future,” she said. “While this is the first major climate case against Exxon Mobil to go to trial, many more are to come.”

For now, all eyes are on the Manhattan courtroom where New York State Supreme Court Justice Barry Ostrager will preside over the non-jury trial. Any verdict is likely to be appealed, delaying resolution of the case for years, barring a settlement.

James Fanto, a professor at Brooklyn Law School, said he’s unsure that litigation is even the best way to deal with Exxon’s climate policies in the first place, given the sharply partisan nature of global warming as an issue—despite the now-settled science.

“The political arena seems the right one to deal with fossil fuels and the firms selling them,” Fanto said.