Smoke from a wildfire is lit up by the sun as it sets over the Panguitch Valley on June 24, 2017, outside Panguitch, Utah.
Photographer: George Frey/Getty Images

The Trump administration wants to clear 11,000 miles of fire fuel breaks across public lands in six Western states as a way to control giant wildfires.

But wildfire experts are mixed on the viability of the plan, the government’s own scientific agency calls it a “grand experiment,” and environment groups are strongly opposed.

The draft plan published in June involves clearing swathes as wide as 500 feet along existing unpaved primitive roads and other rights of way through sagebrush and pinyon and juniper woodlands in order to help firefighters control rangeland wildfires and slow their spread.

Under the BLM’s preferred option, up to 1.09 million acres of land—larger than the state of Rhode Island—could be cleared with herbicides, bulldozers, mowers, grazing or intentionally set fire across the Great Basin in Utah, Nevada, Idaho, California, Washington, and Oregon.

The BLM issued a draft programmatic environmental impact statement for the fuel breaks plan in June, and a public comment period on it ends Aug. 5.

‘The Science Will Come in Time’

“The direct effect of a fuel break itself is the reduced amount of available fuels should a fire move into fuel breaks,” said Marlo Draper, project manager for the BLM’s Fuel Breaks in the Great Basin project. “I don’t deny the uncertainty. The science will come in time. You have to have fuel breaks in order to study fuel breaks.”

A U.S. Geological Survey report cited in the BLM’s environmental impact statement estimates that about 6,200 miles of fuel breaks already exist in the Great Basin. The BLM is proposing 11,000 miles more of them.

The USGS report calls new fuel breaks “a grand experiment” and says that there is very little scientific evidence—only anecdotal evidence—that they work.

Firefighters recognize that fuel breaks are likely to do little to reduce a fire’s intensity, flame length or rate of spread under the extreme fire weather conditions that have caused wildfires to explode and quickly spread through the Great Basin in recent years, the report says.

“That is a limitation of fuel breaks—under severe fire weather conditions they’re not going to be effective because the intensity of those fires is such that they can jump right across fuel breaks and roads,” Douglas J. Shinneman, a USGS supervisory research fire ecologist in Idaho and lead author of the report, said in an interview. 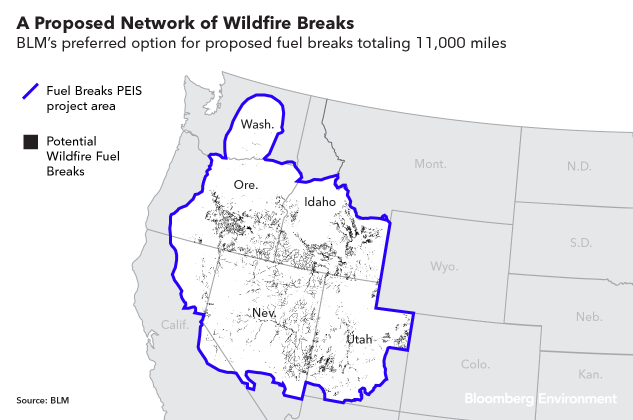 Federal agencies have long built fire breaks to help control blazes, but they haven’t kept consistent records on the breaks or monitored them for effectiveness, the report says. Federal data shows wildfires have routinely burned through fuel breaks that were mapped in federal databases, but not confirmed to actually exist on the ground, the report says.

Though forest fires, such as California’s Camp Fire, have gotten the most attention in recent years as they incinerate homes and entire towns, rangeland fires were among the nation’s largest conflagrations in 2018.

Climate change is contributing to increasingly volatile wildfire conditions in the West as heat, invasive species, high winds and other factors have created extreme fire weather in which rangeland blazes explode and quickly spread through the desert.

The breaks could slow wildfire spread and are a logical idea given the increased wildfire threat, but they’d have to be regularly maintained, said J. Derek Scasta, an assistant professor and extension rangeland specialist in the Ecosystem Science and Management department at the University of Wyoming.

“It’s easy to create an overly ambitious plan that the human resources aren’t there to do it the way it should be done or the way we want them to be done,” he said. “There are big questions with fuel breaks, too. At this landscape-scale, how do we establish fuel breaks that are long enough, wide enough, enough in number to actually affect fires?”

If fuel breaks are ever proved effective against wildfire, they come with a tradeoff: Damaged habitat for species such as the greater sage grouse, Shinneman of the USGS said. The chicken-sized bird is an indicator species for the health of the sagebrush lands, which support hundreds of species of wildlife, according to the Fish and Wildlife Service.

In building fuel breaks, “ideally we will reduce wildfire, or at least the risk of wildfire, but at the same time, there’s going to be potentially negative impacts from additional disturbance of the fuel breaks themselves, and it can be argued that that’s the lesser of the two evils,” Shinneman said.

The BLM considers the area where the fuel breaks may be built already disturbed because they’ll parallel existing roads or other rights of way, said Ken Frederick, a spokesman for the BLM’s National Interagency Fire Center.

The fuel breaks promote the spread of invasive grasses and other non-native species, which can take over large swaths of land and increase the risk that wildfires will spread, not slow down when hit the fuel breaks, said Meg Krawchuk, a scientist who studies landscape fire and conservation science at Oregon State University.

“They carry fire very fast, very quickly,” Krawchuk said, referring to fuel breaks covered with invasive plant species. “You end up with a conveyor belt for fire in these grasses.”

Fuel breaks also fragment wildlife habitat and damage ecosystems—especially from the use of chemicals and earth-moving machines the BLM expects to use to clear the fuel breaks, said Erica Newman, a researcher studying the ecological effects of wildfire and other landscape disturbances at the University of Arizona.

“One of the big rules of ecology that we know is that species do not survive in fragmented habitat,” Newman said. “They’re talking about an ineffective tool to fight fire, and it’s going to fragment habitat. They’re going to raise fire risk and further endanger biodiversity. Their reason for doing this is not sound.”

“I have never heard any scientific basis for fuel breaks,” Newman said. “They’re obscuring science rather than employing it to do their research. This looks like a giveaway to the chemical and machinery corporations.”

Wildfire is a major threat in the Great Basin, but “imposing a massive system of destructive fuel breaks onto the landscape is unlikely to control wind-blown fire racing across sagebrush flats as it burns through cheatgrass and other invasive species,” said Mark Salvo, vice president for landscape conservation for Defenders of Wildlife.

Neal Clark, wildlands program director for the Southern Utah Wilderness Alliance, said he worried the plan will mean BLM will needlessly “chain or masticate” arid forestland in Utah, referring to the use of a big chain strung between two pieces of machinery that is raked across the land to uproot vegetation.

“Without any evidence and science showing that these are beneficial, it makes very little sense to authorize these projects that could have untold adverse effects on the environment,” Clark said.