Missteps during a government investigation, especially in communications, can cause serious harm to a company’s credibility and reputation. Finsbury CEO Paul Holmes offers four principles legal teams should keep in mind to avoid common pitfalls.

Imagine you are general counsel to a company being investigated by the Department of Justice. The whistleblower action that prompted the probe relates to alleged criminal violations of the False Claims Act that could result in a $3 billion penalty and jeopardize business-critical federal contracts.

Following months of negotiation, you’re on the verge of disclosing a substantial provision for a potential settlement.

That’s when you receive word from corporate communications that a national business publication is preparing to run an in-depth story, citing sources with direct knowledge of the investigation. Corporate communications is asking you what this is all about. The company declines to comment but, the following day, your head of investor relations tells an industry conference the allegations are baseless. This drives a new round of coverage, the stock soars, and now you’re scrambling to manage the fallout.

This is a hypothetical scenario, but it’s grounded in the experience of public companies where legal, communications, and business teams are less accustomed to working together in the context of regulatory and enforcement actions.

Communications missteps at any stage of a government investigation can do serious harm to a company’s credibility and reputation. The effects can be sudden and long-lasting—extending from the company’s share price to the loyalty of its customers to its ability to recruit and retain talent. 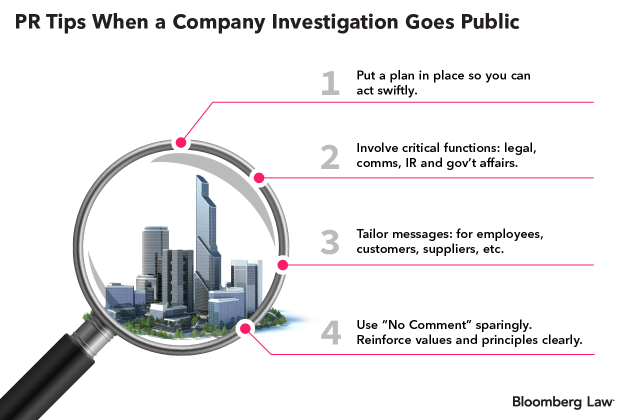 Given the stakes, internal and external counsel should consider early in an investigation how to manage not only the legal risks facing a company, but also the broader reputational considerations, especially if the investigation becomes public before it’s ripe for disclosure.

Here are four principles legal teams can keep in mind to avoid some common pitfalls.

Prepare for Any Investigation to Go Public … at Any Time

While not every investigation rises to the level of a disclosure or results in media attention, legal teams need to prepare for the possibility that they could become public.

Accordingly, many critical functions within an organization—including legal, communications, IR and government affairs—must be ready to act swiftly and in concert when called upon. Otherwise, there’s a real risk they could stumble out of the gate, speak out of turn or otherwise make a bad situation worse at a critical moment.

Issues management is like a muscle; it needs to be exercised. Companies must have a finely-tuned system in place to identify issues that surface and, where necessary, create cross-functional teams to agree and develop an appropriate response strategy. Crisis communications protocols and tabletop simulations can help every function understand the specific role it will play in support of an effective and coordinated response to critical situations.

Lawyers and communications professionals sometimes speak different languages—there is a nuance. While attorneys can be extremely effective communicators, oftentimes the strongest, most persuasive legal arguments can fall flat—or even backfire—with reporters and others.

“Puffery” is an instructive example. To a lawyer it may be a reasonable defense, but to a layperson—including your client’s employees, customers or suppliers—it may sound like an admission that the company can’t be taken at its word.

Again, coordination with cross-functional in-house teams and advisers can help prevent your well-crafted legal defense from muddling the message or creating reputational risk among a company’s other important stakeholders.

You Have the Right to Remain Silent, But …

During an investigation, it is paramount that any public statements do not get ahead of the facts or create new risks. Legal teams understand this, but all too frequently the solution is to decline comment.

On the other hand, sometimes communications teams don’t understand this. In the rush to protect and defend, a company’s public statements could very well jeopardize the legal strategy.

There is a middle road. While “no comment” is sometimes the appropriate tool, it risks giving the impression that there is something to hide. You also end up ceding the narrative. Companies are often better served by taking the opportunity to reinforce their values and principles clearly and proudly—whether or not they address the substance of an allegation.

No Amount of PR Can Fix Being a Bad Actor

Even the best managed companies can find themselves under investigation. Those with strong cultures of compliance and clearly stated values have something to fall back on when communicating with stakeholders. Those that don’t—or that fail to take the appropriate remedial steps to address the underlying issue—will struggle. Communication can be an effective tool, but it’s not a magic wand.

Again, an ounce of prevention is worth a pound of cure. Putting aside any legal requirements, regularly sharing compliance policies with employees—and having a clear, accessible record of those communications—can be a powerful shield to defend a company’s reputation.

Additionally, managers should be reminded by their leaders that they have a responsibility to reinforce these policies with their teams, listen to any emerging concerns and respond accordingly.

Government investigations, by their nature, can be fraught experiences for corporate leadership and their legal counsel, with little room for error in managing the legal risk. Given the considerable potential for reputational impact, it behooves legal counsel to take a holistic approach to risk mitigation when developing the legal strategy. Otherwise, you can too often end up simply displacing the risk.