Women stand on a bridge over the Whitewater River, a key water source for the Coachella Valley, on May 6, 2019, in Whitewater, Calif.
Photographer: Mario Tama/Getty Images

Water rights are some of the most complicated legal issues today, with implications that directly impact tens of millions of Americans. Gordon R. Schonfeld facilitated a round table discussion of California water rights issues with two O’Melveny & Myers attorneys and a partner with Best, Best & Krieger. They discuss lessons from a complicated 2019 California case and offer ideas on solutions.

As long as there are disputes over access to, and ownership of, shared water resources—particularly in the arid western U.S.—lawyers and courts will be on the front lines of resolution efforts.

In a conversation facilitated by Gordon R. Schonfeld, CFA, they discussed the implications of Agua Caliente and the factors that most affect water rights litigation generally.

Q. What’s your biggest takeaway from the Agua Caliente ruling?

Matt Kline: Water rights cases tend to last for years—sometimes decades—and can be very expensive. On balance, it’s best to reach a settlement early and try to avoid litigation whenever possible.

Michael Riddell: Agua Caliente was typical in that the parties should have sat down with each other early on and tried harder to resolve the issues. The result has been years of avoidable litigation.

Russell McGlothlin: Settlement is really the name of the game when it comes to water rights. These are complex cases that often have hundreds, or even thousands, of claimants, along with very tough factual issues and law that can be undecided. Smart water rights lawyers know that settlement is the likeliest route to resolution, and they’ll work extra hard to find a reasonable compromise.

We’re involved in a matter (Borrego Water District v. All Persons et al., California Superior Court) in which the parties have agreed to a stipulated judgment that comprehensively adjudicates all rights to extract and store groundwater in Borrego Springs, which is in eastern San Diego County. While it took about three years to reach the agreement, it took much less time than if the case had played out in the courts. 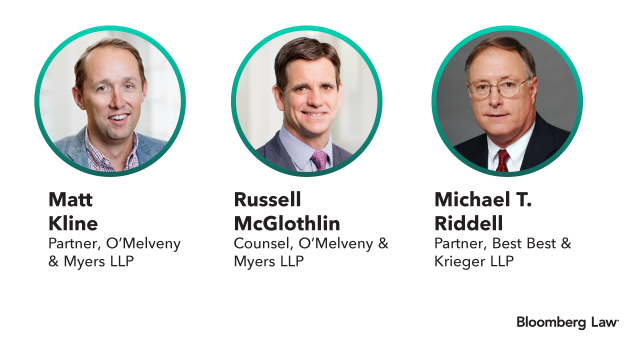 Q. How does California law magnify the challenge of water rights cases?

McGlothlin: Unlike most states, California has a hybrid water rights legal framework that recognizes both land-based rights (known as riparian rights) and rights not tied to land ownership (known as appropriative rights). The case that established the framework, Lux v. Haggin, was decided by the California Supreme Court in 1886, and lawyers have been trying to navigate the hybrid system’s complexity and confusion ever since.

The ambiguities arising from this hybrid system are another factor, by the way, that compels parties to seek compromise and avoid the uncertainty of a trial.

Kline: And the odds of success at trial can be unpredictable and expensive because there are typically so many claimants in California, ranging from mom-and-pop landowners to larger farming operations to Native American tribes—California has the largest amount of tribes of any state, by far—to cities, municipal water districts, groundwater management agencies, water distributors, environmental groups and more.

Riddell: One of the toughest issues in water rights cases is the determination of how much water each party is entitled to, as the size of each party’s share directly affects everyone else’s shares. With so many claimants involved, a case can quickly turn into long, contentious and costly litigation.

Kline: Historically, the state of California was responsible for managing its surface water. Select groundwater basins were managed by the courts or local governments, but many have been poorly regulated and badly overdrafted. Considering that groundwater can provide one-third to two-thirds of the state’s freshwater supply, continual depletion can have dire consequences. Litigation is probable, if not inevitable.

SGMA is the first law of its kind in California and became effective in 2014. It gives local governments the first crack at establishing a process for creating and implementing sustainable groundwater management, with the goal of achieving this sustainability statewide by 2042. The state steps in if local governments can’t do the job over a 20-year period.

While SGMA is still relatively new, it has already informed a number of cases. It’s reasonable to expect it to continue to be both the basis and the subject of litigation going forward.

Q. More than the legal issues, it can seem that water rights cases are driven by imbalances between supply and demand. Is it really that simple?

Kline: Yes, for the most part. You have a scarce essential resource that enables the environment, people and businesses to exist, and not enough to meet demand without legislative, financial, technological or legal assistance.

As water becomes scarcer and thus more valuable, we expect more litigation that determines parties’ rights to it and allocates it among parties. We’re seeing a jump in cases between states, for example. The Supreme Court, which automatically hears cases between states, notably has taken on four such cases in recent years between Georgia and Florida (active), Texas and New Mexico (active), Mississippi and Tennessee (active), and Wyoming and Montana (closed).

McGlothlin: While supply and demand are fundamental to water rights cases, I’d argue that what we really have is a water management problem. We need to optimize the use of existing water by establishing sustainable limits on withdrawals; investing more in water recycling and groundwater recharge; and establishing water markets to incentivize conservation and reallocate water from lower- to higher-value uses

Riddell: I agree. The ability to move water from where it is to where it needs to be is a great asset if you can take advantage of it. California is a prime example, as two-thirds of the water supply is in the state’s northern area but two-thirds of demand is in the south.

McGlothlin: Climate change plays a role in this, too. California’s premier reservoir, which takes the form of snowpack in the Sierra Nevada mountains, is often smaller and now melts and runs down toward the Pacific in larger quantities and earlier in the year than previously. This puts constraints and challenges on capturing that water and transferring it to help manage supply. Litigation over climate-based developments may become more acute.

Q. What can be done to better balance supply and demand and increase transferability?

Kline: There are several ways to go. Legislation, creating smart water markets and better valuation methods are all key, as are litigation settlements, conservation measures, desalination, recycling and the conversion of inefficient water-dependent properties to other profitable purposes.

McGlothlin: Recycling should be a bigger piece of the puzzle. While the data vary, it’s clear that the U.S. has the capacity to do much more recycling than it currently does.

Riddell: We need more thinking and funding devoted to conservation measures and new technologies. With three-quarters of the world covered in water, surely we can find more and less expensive ways to make water drinkable and transport it to places that need it most.

Gordon R. Schonfeld, CFA, is a writer/editor specializing in thought leadership for professional service firms. He is based in New York City. Previously, he was a senor writer at Proskauer Rose.