An air conditioner in a window at Brighton Beach in Brooklyn, N.Y.
Photographer: Spencer Platt/Getty Images

U.S. appliance and chemical companies aren’t standing still while they wait for the Trump administration to decide on a global deal to cut potent greenhouse gas coolants. They’re moving to Plan B: work with states setting limits.

The companies have worked for more than a year to encourage President Donald Trump to support and send to the Senate for ratification a 2016 global deal to phase down hydrofluorocarbons (HFCs), greenhouse gases typically used as refrigerants that warm the Earth at a rate hundreds of times more than carbon dioxide.

The agreement, known as the Kigali Amendment to the Montreal Protocol, took effect Jan. 1 without the U.S.

That scenario would be simpler to implement and support efforts to transition to more climate-friendly chemicals, they say.

But with no end to federal limbo in sight, they are also working more closely with states like California, New York, Maryland, and Connecticut that are moving to lock in HFC reductions with state-level limits.

The companies’ efforts could lead to a default national program, if state rules match up with each other and the Kigali targets.

“The preference is that the federal government would act and have a nationwide regime,” John Hurst, vice president of government affairs and communications at Lennox, told Bloomberg Environment. “The fallback is California has a tight, coherent plan and states replicated that to the letter.”

“The nightmare is, everybody does their own thing and we try to keep up,” he added. “That’s a really bad outcome for the consumer and industry.”

China in the Wings

HFCs served as the predominant replacement for ozone-depleting chemicals, which countries agreed to eliminate under the Montreal Protocol.

The Kigali deal, agreed to by 197 countries in 2016, amends the protocol to add a phasedown of HFCs, which don’t deplete the ozone but are potent greenhouse gases.

More than 60 other parties, including Canada, Japan, and the European Union, have ratified or otherwise approved the Kigali deal, and most developed nations must cut their HFCs by 10 percent in 2019.

In the U.S., industry is continuing to transition to climate-friendly refrigerants, leading the development of HFC alternatives.

For example, Carrier in December announced it would switch its residential and light commercial refrigeration systems starting in 2023 to a new alternative it developed with Chemours that is one-fifth as damaging to the climate than the current chemical it uses, Matthew Pine, Carrier’s president of residential heating, ventilation and air conditioning, said.

Without federal restrictions, though, some companies could be allowed to continue producing and using HFCs.

The longer the U.S. waits to enter the Kigali deal, the more those U.S. investments are undercut and could go elsewhere, Durwood Zaelke, head of the Institute for Governance & Sustainable Development, said.

U.S. industry momentum “will only go so far before they lose their competitive edge and rethink their business plan,” he said.

Chinese companies stand to gain, as they make a large portion of the world’s air-conditioning appliances already and are working to develop their own alternatives, Zaelke added.

States Out the Gate

Companies such as Carrier have a seat at the table in California, Pine said.

The company supports California’s approach to cutting HFCs, and its engineers and product marketing representatives have worked with state regulators to ensure they account for aspects like changes to building codes or how long older equipment might run before it is replaced, he said.

In December, California’s air regulators adopted statewide the regulations the Environmental Protection Agency had put in place during the Obama administration to cut HFCs.

A federal appeals court in July 2017 largely struck down the EPA’s rules, and the agency in April paused the rules while it retools the program in line with the court’s ruling. States don’t have to wait until the EPA resolves that to issue regulations. 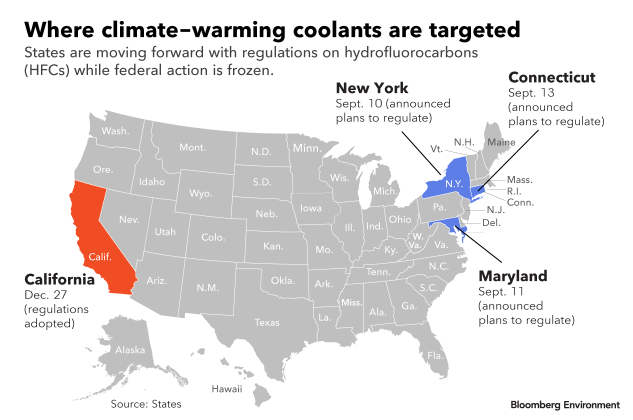 New York, Maryland, and Connecticut aren’t far behind California. Regulators from those states announced in September that they would also adopt the Obama-era rules.

Maryland hopes to have final rules in place in 2020, Ben Grumbles, the state’s top environment official, said, adding that the state is working with others, including California, to craft a model rule.

A model rule could be useful to states like New Jersey, where environment regulators are exploring options to control use of HFCs in the absence of federal leadership, including state-level regulations, Larry Hajna, a spokesman for the Department for Environmental Protection, said.

Environment regulators will seek input from the state’s Clean Air Council when it meets in April, he added.

Environmental advocates expect more states will jump on board soon—including more from the U.S. Climate Alliance, which includes governors from 16 states and Puerto Rico.

Cutting HFCs is “an area where a number of states working together can drive the industry in the right direction nationally,” Jared Snyder, deputy commissioner of New York Department of Environmental Conservation’s Office of Air Resources, Climate Change, and Energy, said.

In addition to state-level rules, Snyder said New York is working with the other alliance states on HFC reductions that would go beyond the Obama-era EPA rules.

“Industry is very focused on ratification, but I think they’re beginning to realize the real question is implementation and a policy framework that confirms and makes more certain the Kigali schedule and the transition planning that they have done,” David Doniger, the Natural Resources Defense Council’s senior strategic director for climate and clean energy, said.

“If that’s what you want, go for the policies that promote that, and don’t put all your eggs in the Kigali basket or any other basket,” he added.

The Trump administration is considering the Kigali deal through an interagency process, officials at the White House and the EPA have previously said. Late last year, industry groups submitted data on how the agreement would affect American consumers at the White House’s request.

Industry groups, though, are cautioning against a transition away from HFCs quicker than what the Kigali deal would require.

“The push that we’re seeing by California and some of the states to be more aggressive, or to follow the European Union model, is a huge mistake,” Stephen Yurek, president and CEO of the Air-Conditioning, Heating, and Refrigeration Institute, said.

The European Union set stricter targets in some uses than Kigali, and it led to market disruptions and increased consumer costs, added Yurek, whose group represents major U.S. appliance and chemical companies.