When you think of a bee, what are the first images and sounds that come to mind? Fuzzy yellow; black stripes; little antennas; and a humming buzz.

The bee you’re probably thinking of is the honeybee—one of thousands of species of bees that has become the sort of “poster bee” for environmentalists. It’s charismatic, it’s cute.

For the fourth episode of our podcast, we go deeper. While honeybees are an integral part of our agricultural economy, the majority of pollination for most crops and flowers is actually done by other insects, Dave Goulson, a biology professor at the University of Sussex, says. 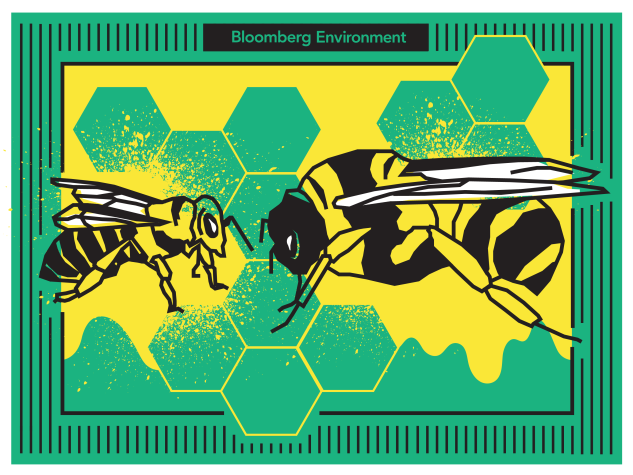 Goulson says there’s a huge amount of public misunderstanding surrounding bees. By focusing too much on honeybees, we risk ignoring certain problems faced by all the other bees, he says.

Honeybees are essentially livestock, Goulson says. They’re kept in manmade structures where they’re given food and medicine, and then they’re deployed by the millions to perform a specific agriculture function. All that special treatment makes them a poor symbol for the environmental problems faced by the many other species of bee, he says.

“I get really frustrated when people talk about ‘the bee,’” Goulson says. “They’re usually talking about honeybees, or maybe they’re just talking about bees and they don’t realize there’s more than one species.”

Of course, all bees still benefit from the media attention and subsequent public awareness honeybees received in 2006 because of colony collapse disorder, Mace Vaughn, who co-directs the Pollinator Program at the Xerces Society for Invertebrate Conservation, says,

But there are plenty of candidates just as charismatic and as cute as the honeybee, says Paige Embry, a freelance writer and author of the book “Our Native Bees: North America’s Endangered Pollinators and the Fight to Save Them.”

“If you’re looking for a poster child for U.S. bees, you know the big, fat, fuzzy bumblebee would be a nice alternative,” Embry said. “It’s charismatic, it’s big enough for people to see.”

Hosts Adam Allington and David Schultz explore how the honeybee came to be the bee in this episode, and look into whether we are focusing too much on the wrong bee.

Listen and subscribe to the Business of Bees podcast from your mobile device:
Via Apple Podcasts |Via Pocket Casts |Via Spotify | Via Overcast

David Schultz
Reporter
How Bees and Farmers Got Together (Podcast)
How Apis Mellifera Became Our Go-To Honeybee (Podcast)
Bees Are Big Business, Believe It or Not (Podcast)
© 2021 The Bureau of National Affairs, Inc.
All Rights Reserved