Sitting at the confluence of two major rivers, California’s capital city of Sacramento has been prone to inundation almost since its founding.

In the 1860s after a massive flood, the governor moved the capital to San Francisco temporarily and ordered parts of the city raised. Even after decades of work and billions of dollars in investment, Sacramento remains one of the two most flood-prone cities in the nation along with New Orleans, according to experts.

Now the River City faces a new water threat: homeless people setting up camp on—and digging into—the 1,100 miles of earthen levees that Sacramento and surrounding areas count on to protect them from devastation.

“Homelessness is a massive issue and it’s affecting all walks of life,” said Darren Suen, a civil engineer and policy adviser for the Central Valley Flood Protection Board. “It’s gone beyond our downtowns and our parks. It’s now affecting public safety.”

This past May, officials from Reclamation District 1000, which maintains 46 miles of levees in Sacramento, counted 81 encampments along six miles of levees.

When the people were relocated, officials found three areas along those six miles where the levees had been dug into, including one where terraced stairs had been cut into the side for easier access to the water. The two other sites were 25 to 30 feet wide and four to five feet deep, said Kevin King, general manager of Reclamation District 1000. In Yuba County just north of Sacramento, one group dug a crude latrine, hiding the cut into the levee slope.

Repairing each site cost between $5,000 and $10,000, King said. Had the areas not been discovered, the damage could have led to dramatic flooding.

“We have some anecdotal evidence of homeless encampments either impeding regular maintenance and inspections, or creating excavations that could compromise levee integrity if not addressed,” Nancy Allen, spokeswoman for the Army Corps of Engineers for the Sacramento District, said in an email.

The issue is not entirely unique. San Diego has seen homeless people’s possessions swept into levee water, causing obstructions that could lead to flooding. Parts of Arizona, Nevada, and Hawaii have also had issues.

Sacramento, though, combines a natural vulnerability to flooding, a history of haphazard waterway construction, and a growing homeless population that has few places to go, other than the levees.

The homeless population has increased 19% in Sacramento since 2017, and the average incidence of homelessness in the capital is almost twice the U.S. average, according to a California State University at Sacramento report. Of the estimated 5,570 people who are homeless each night in Sacramento, 70% sleep outdoors, in cars or in abandoned buildings—a reflection of a temperate climate that makes it easier to live outside and lack of shelter beds.

Moving the homeless off the levees became more challenging after the Ninth Circuit Court of Appeals ruled in April that camping in public spaces cannot be prohibited in areas that do not have adequate shelter beds for the homeless.

That includes Sacramento. The region only has beds for about 30% of the population.

“Flood control infrastructure is never designed for human habitation,” said Sara Agahi, flood control district manager for San Diego County. “We can not handle this as an engineering problem we can solve. This is a much wider social issue.” 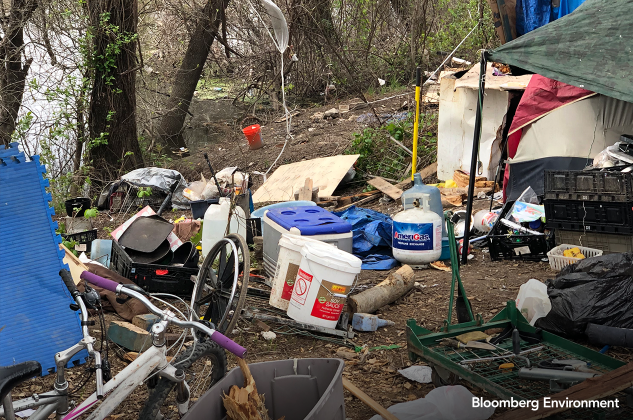 Tarps, tents, propane tanks, bicycles, and other items were removed from homeless encampments built on levees along the American River in Sacramento.
Photo provided by Reclamation District 1000

“This is not an issue where we’re running around and taking a population that is homeless and making life even more difficult for them,” Conlin said.

Homeless advocates say police cite laws about off-leash dogs, carts on parkways, and hanging items off trees in order to move people off the levees. Or they will give notice that an area is slated for cleaning, said Paula Lomazzi, executive director of the Sacramento Homeless Organizing Committee.

“It’s just an endless nightmare for homeless people that they can’t have any security,” she said. “It’s very trauma-inducing.”

She added that a small number of homeless people are causing damage, and educating them could go a long way. So could finding housing.

“People have found that that is the only place to go,” Lomazzi said. “Sheltering does not solve homelessness. Housing does.”

Of the 33 U.S. counties where claims against the National Flood Insurance Program outstrip premiums by more than $10 million every year, Sacramento County is the furthest inland, according to a Congressional Budget Office report.

Its location at the bottom of a valley is only one reason why.

Back in the gold mining days, people used jets of water to loosen rocks, which created a thick slurry that would clog the river with sediment. Waterways to prevent flooding were dug but made narrower than normal so the speed of water would also better flush out the sediment. Bypasses were built for trade and commerce, and then reservoirs came in the 1960s to store water to help reduce flooding.

“It was really haphazardly put together over time,” Suen said.

California has nearly 9,100 miles of levees protecting a population of about 7.2 million people. Of those, only 2,104 miles are under the authority of the Army Corps and the rest are maintained by cities, counties, reclamation districts, and others, according to an Army Corps summary.

Federal, state, and local officials have spent more than $3 billion in the past 10 to 12 years, and an Army Corps project is underway to fortify 42 miles of levees in the Natomas basin, just north of the capital.

Levees can fail in a number of ways: being overtopped by water, undermined by water seeping in beneath the ground, and from holes dug or cut into the embankment. Water can find its way through and gradually erode the earthen structure.

“It allows the river to just kind of flow,” said Paul Brunner, executive director of the Three Rivers Levee Improvement Authority, which finances and builds levee improvements in southern Yuba County north of Sacramento. “It flows out into the land side of the levee. The water can become pretty deep. It can envelop houses. It’s pretty devastating.”

The barriers can be weakened by digging, and tarps and tents placed on top of them can make it hard for flood control districts to inspect for damage, said King, of Reclamation District 1000.

California Assemblymember Jim Cooper proposed a bill in the legislature, scheduled for an August committee hearing, that would designate levees as critical public infrastructure and make it illegal to cover up or obstruct views. People and belongings could also be moved for inspection. Those measures would go beyond existing laws that make it a misdemeanor to damage a levee.

“This is not against homeless people,” Cooper said. “We have a very fragile levee system. If we don’t do something to protect levees it endangers everybody.”