In an hour-long argument in Washington Monday, Chief Justice said the position taken by environmental groups opposed to the pipeline would “erect an impermeable barrier” along the 2,200-mile (3540-kilometer) trail, separating consumers on the eastern seaboard from inland energy resources.

A ruling in Dominion’s favor would eliminate the biggest obstacle to the 600-mile pipeline, which would carry as much as 1.5 billion cubic feet of gas per day from the Marcellus shale basin in West Virginia to customers in North Carolina and Virginia.

Dominion, which is developing the pipeline with , says it expects to begin construction by mid-year and complete it by the end of 2021. The company is still facing a pending administrative review of other environmental issues.

The case will also affect ’s Mountain Valley gas pipeline from West Virginia to Virginia. Mountain Valley told the Supreme Court in December that the appeals court ruling forced a halt to its project, which is 90% complete at a cost of more than $4.3 billion. 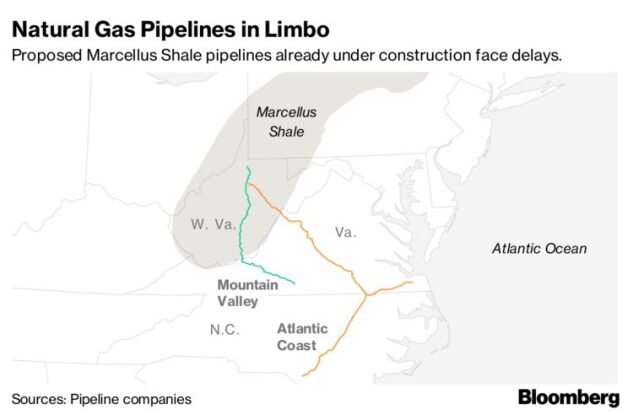 Dominion and the Trump administration contend that while the National Park Service manages the Appalachian Trail, the underlying land is part of a national forest -- putting it within the Forest Service’s jurisdiction.

Justice called that “a difficult distinction to wrap one’s head around.”

But Roberts likened the trail to an easement, in which one entity owns the underlying land but others have the right to walk along it in certain places.

This “doesn’t strike me as that unusual a concept, that there are property rights that are distinct from rights in the land” the chief justice said.

Other justices focused on the placement of the pipeline well below the trail.

Michael Kellogg, the lawyer for the environmental groups, said that approach couldn’t be squared with the wording of federal law. Kellogg pointed to a provision that says the Interior Department, which houses the Park Service, has the authority to grant rights-of-way “upon, over, under, across or along” the Appalachian Trail.

Justice said he worried about the implications of Kellogg’s position.

Atlantic Coast Pipeline’s lawyer, , urged the justices to issue a broad ruling that would apply even if a pipeline were not so far below the surface. But he added: “It’s not my job to resist winning this case on a narrow ground, so I’m not going to do that.”

The argument was a positive one for the pipeline, Washington-based ClearView Energy Partners told its clients in a note. “We like its chances with the Supreme Court,” the note said.

The trail, completed in 1937, is the world’s longest hiking-only footpath, according to the Appalachian Trail Conservancy, which works to protect and maintain it.

Atlantic Coast says more than 50 pipelines already cross the trail, some of them on Forest Service land. But the environmental groups say none of those were authorized under similar circumstances. Some are on state or private land, while others predate the 1968 congressional designation of the Appalachian Trail.

The case is to some degree a proxy for a broader fight over the nation’s energy policy. Business groups are backing the pipeline, as are unions that would benefit from the thousands of jobs it would create. Local property owners are joining environmental advocates in seeking to block the project.

The Appalachian region, which includes the Marcellus shale basin, is practically drowning in natural gas. Pipelines like Atlantic Coast have been proposed as a way to shuttle fuel out of gas fields and toward demand centers in the southeastern U.S., where it can be used for heating and cooking as well as to generate electricity.

Opponents question the need for new gas infrastructure, pointing to slowing demand in the years since the project was announced in 2014. Environmental groups say natural gas pipelines further America’s dependence on fossil fuels at a time when climate change demands a complete shift to renewable sources of energy.

(Updates with excerpts from argument starting in fourth paragraph)