The Punjab transplant bought his first pair of Wranglers, a pair of heeled shoes, and a copy of Vogue at a mall within days of immigrating to Montreal—a transforming experience that led him down the path of turning accessory firm Matt & Nat into a leader in sustainable apparel.

“I was in heaven—like I got a million bucks in my pocket,” Kohli, Matt & Nat’s president and CEO, told Bloomberg Environment. “This was my whole plan—to come to Montreal and get this denim and the boots and the copy of Vogue magazine. It made me the happiest person that day.”

Kohli would take that passion decades later and use it to grow Matt & Nat—an abbreviation for “mat(t)erials and nature”—from a small vegan accessory company to a well-known and successful fashion brand with a fleet of sleek stores across North America.

The company has plans to expand in fashion meccas like New York’s Soho and London’s Regent Street, and its celebrity fans include Natalie Portman, Olivia Wilde, and Charlize Theron.

The company now has 130 employees, 10 stores in Canada and the U.S., a customer base in the U.K. and Germany, and will be turning a pop-up store in New York’s Soho into a permanent one this year.

“Whatever you do, you have to love it,” Kohli said of his decades-long journey with the company.

Part of Matt & Nat’s success—but by no means the most important one in Kohli’s view—has been its appeal to buyers who care about the ethical impact of their purchases.

The company’s vegan credentials means it won’t use animal products like leather. It’s seeking to pioneer the use of more sustainable materials like recycled plastic and leather made from fruit, and it’s also pushing its factories in China to uphold the highest labor-rights standards.

“We change with the times,” Kohli said.

Consumers in North America and elsewhere are increasingly interested in veganism and vegetarianism in many areas, and Matt & Nat has had great timing in riding the wave, said Craig Patterson, editor-in-chief of Retail Insider, a Canadian industry magazine.

Luxury brands like Gucci and Chanel have stopped using fur, while New York City is considering a ban on it. Companies that have resisted changing their materials, like parka maker Canada Goose, have faced a strong backlash.

Meanwhile, brands like Matt & Nat and Wuxly Movement, which makes outerwear, have grown their reputations, and animal-free food and restaurants—like Beyond Meat, vegan food chains By Chloe and Copper Branch—have also prospered. 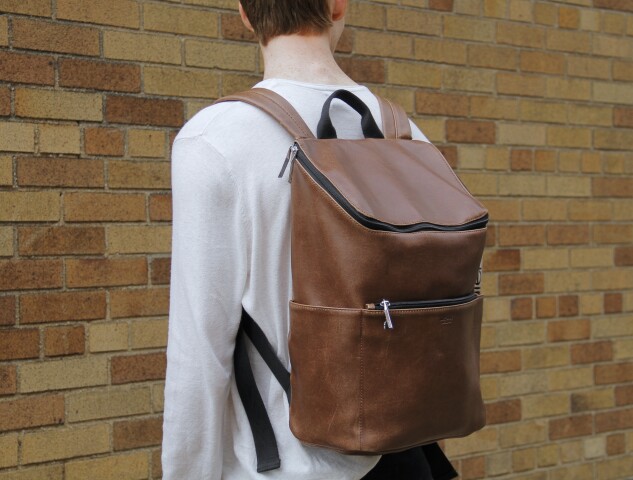 Matt & Nat’s strength has been to toss aside dated assumptions about veganism, Patterson said.

Their stylish handbags make fake leather—once derided as the mark of a cheap product—seem chic, and the stores offer no trace of Matt & Nat’s commitment to the environment, he said.

“It doesn’t look like it would be an eco-retailer—typically you think of granola, grassroots or vintage,” he said.

Consumer interest in reducing environmental impacts more broadly is also growing, but the sustainable fashion movement is in its infancy, said Marilyn McNeil-Morin, director of the Fashion Exchange at George Brown College in Toronto.

Fashion’s environment footprint—from water use to chemicals to waste—is considerable, and the global industry has been searching for about a decade for one measure or standard to help companies and consumers alike, McNeil-Morin said.

Matt & Nat is embedding its ethical achievements into its brand, making it easier for buyers to feel they’re confident in what they’re getting, she said.

Among the challenges sustainable fashion companies face are the shifting debates around what materials are the best to use, said Cory Skuldt, a business management consultant with FWD Impact in Austin, Texas.

“Those concerned about climate change or resource use are looking at vegan leather and saying, ‘I want to buy a vegan leather alternative, but I’m not comfortable buying a fossil fuel product,’” said Skuldt, who helps firms adopt sustainable practices.

Matt & Nat’s bags are mostly made from two forms of plastic—polyvinyl chloride and polyurethane—but have also been made from recycled nylons, rubber and cork.

The lining in every bag is made from from recycled plastic water bottles, keeping six million of them out of landfills each year, Kohli said.

Because of concerns around using plastic, Matt & Nat is exploring the use of leather made from the skins of pineapple and coconut. But the skins only produce a dark brown and black color that don’t have a high-end finish, so the company hasn’t yet figured out how to use it yet, Kohli said.

“The most important is to be vegan and eco-friendly, but at the top, the look has to be very sexy,” he said. “That’s how we became so popular.”

Kohli’s love for clothing trends came long before his commitment to veganism and the environment. Growing up as a child in India, he grew fond of fashion watching his father run a fabric shop.

Kohli finished high school and began working with relatives who bought electronics in the U.S.—televisions, Walkmans, and Nintendo systems—and then sold them to stores in the Montreal area.

After over a decade doing that, he met a man whose accessory business was struggling and who kept pestering him to form a partnership. Kohli found the opportunity to make the leap into fashion and joined Matt & Nat in 2001.

It was also around this time that a friend showed him a video of animals being transported across Canada and he became a vegetarian, later a vegan.

His involvement in Matt & Nat helped bring steady growth over the 2000s, but the financial crisis in 2008 slashed sales.

Kohli bought out his partner in 2013 and the company has since rebounded to grow 15 times over, Kohli said.

To contact the reporter responsible for this story: James Munson in Toronto at correspondents@bloomberglaw.com