The remains of an ore processing building at the former New Idria mercury mine.
Photo courtesy Rachel Hohn

Nearly half a century after a Gold Rush-era quicksilver mining operation shut down in northern California, mercury continues to flow into a nearby creek, and federal officials blame the mine’s state landmark status for cleanup delays.

In its heyday, the New Idria mercury mine was the second most productive mine of its kind in the U.S. By the time the mine closed in 1972, it had produced more than 38 million pounds of mercury. Today, the site is a remote ghost town 135 miles southeast of San Francisco where history buffs visit, but less than 10 people live nearby.

California condor, giant kangaroo rats, blunt-nosed leopard lizards, and other endangered or threatened animals live in the area. Mercury and other toxics like arsenic are still present, posing a threat to those species as well as to fish and grazing cattle.

But the EPA hasn’t reached out to California about full cleanup of the site, and previous contacts were about small projects there like tree removal, State Historic Preservation Office Spokesman Jorge Moreno said.

“Note that it is the responsibility of the federal agency to consult with the SHPO, not the applicant,” Moreno said in an email. “However, nothing further has been received on this project.”

An estimated 1.5 grams of unfiltered total mercury flows into a creek each day from New Idria, according to researchers from California State University, Northridge, who took water samples in San Carlos creek about a kilometer from the site in 2019. 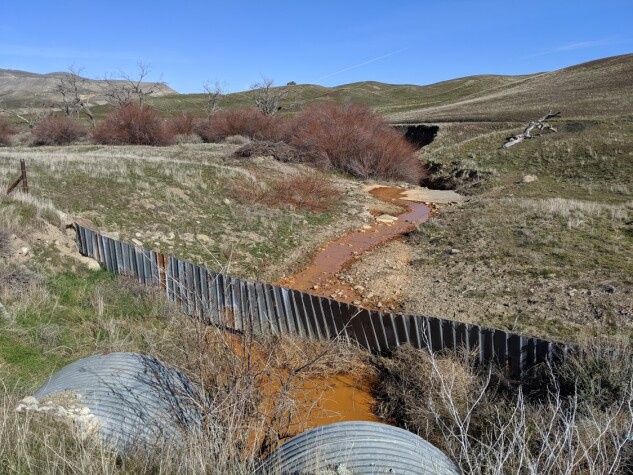 The coronavirus pandemic has interrupted additional research and data processing, but more investigation is needed, said Rachel Hohn, who conducted sampling and research as a graduate student and is an engineering geologist with the State Water Resources Control Board.

The remote site, with no nearby development, and limited research has “been able to slip through the cracks,” Hohn said. “There’s not a lot of data.”

A settlement between the EPA and the current owner of the site, Ohio-based Buckhorn Inc., was announced in December 2018. It required Buckhorn to investigate the contamination at New Idria—a review that would likely take two years and cost $2 million, according to an agency news release.

Neither Buckhorn, nor representatives listed in the settlement documents as cleanup agents, responded to requests for comment.

EPA wouldn’t make project staff available for comment. A later email from agency spokeswoman Soledad Calvino on Tuesday said the agency was preparing documents for a consultation with the state. Calvino didn’t explain the reason for the delay.

“We are all interested in getting the work done as quickly as possible,” she wrote.

The first mining claim for New Idria was filed in the early 1850s. Ore hauled out from over 30 miles of underground tunnels was first moved out by burro, then trains. The first brick furnace was used there, to roast mercury sulfide into cinnabar and then a vapor, which was cooled and bottled.

Contamination is spread across roughly 40 acres. Some of the waste pilings from mining operations abuts San Carlos creek, which runs through grazing land and drains into another creek that opens into Mendota Pool, a popular fishing spot, according to the EPA settlement agreement.

Work was done between 2011 and 2015 by EPA and Buckhorn to expand a settling pool, stabilize the waste piles, and divert surface water. Fencing and diversion of mine drainage has also taken place, Calvino wrote.

Mercury vapors in hot spots are a public health hazard and mine tailings could expose people to mercury and arsenic, which could elevate health risks in adults and children, the federal Agency for Toxic Substances and Disease Registry (ATSDR) said in a 2016 report. Skin contact or drinking surface water wasn’t expected to be harmful, though the agency in its report couldn’t determine if contaminants were impacting public water wells or harming people.

Exposure to mercury can come from the air and food, particularly shellfish and fish. Short term exposure to vapors can cause lung damage, increased blood pressure, and skin rashes, while exposure to metallic, inorganic, or organic mercury can damage the brain and kidney, according to ATSDR.

When New Idria was added in 2011 to the Superfund list, the EPA said contamination there posed “a significant risk to endangered and threatened species and a unique wetland environment.”

State toxics and water agencies said the EPA is the lead agency and didn’t comment on the site’s status.

Calvino said the EPA was aware of the Northridge research, but because the stream is ephemeral, more sampling and analysis is needed to determine what may be transported downstream.

“The research available is varied and EPA data shows the San Carlos creek to be seasonal, connecting downstream only during periods of heavy precipitation,” Calvino said.

Extreme weather is a reason for concern because the mercury is believed to come from waste piles on the banks of the creek, rather than mine drainage, said Priya Ganguli, an assistant professor of geological sciences at CSU Northridge who has studied New Idria for years.

“The majority of mercury can occur over just a matter of hours,” she added. “Climate change is going to make these rain events more intense and therefore we could run the risk of more contamination being released.”