The neighborhood around Brooklyn’s heavily polluted Gowanus Canal was, for years, an untouched time capsule. Its mix of manufacturing, industrial, and residential buildings changed hands and uses—like an old warehouse turned into a rock-climbing gym—but kept their shells the same.

“Now, every day that you walk down a block, something is different,” Brooklyn resident Sabine Aronowsky told Bloomberg Environment.

The Environmental Protection Agency is dredging decades of tar-like toxins from the canal as the neighborhood evolves around it. Small grocery stores and laundromats have closed, replaced by high-end restaurants and other businesses.

The EPA has focused on revitalizing blighted and contaminated properties, but the agency lacks safeguards to prevent contaminated site cleanup projects from pricing out poorer residents, environmental attorneys and consultants said.

At these sites, the EPA’s main goal is to make sure the cleanup plan is protective of human health and the environment. The agency said it’s mostly up to the site owner and community to choose how a site is redeveloped, but those who work with low-income communities said the EPA also has a role to play.

A Need for Safeguards

“It’s really hard to just point a finger at one particular process to say that’s responsible for gentrification,” Aronowsky, who is also coordinator of the Fifth Avenue Committee’s Gowanus Neighborhood Coalition for Justice in New York City, told Bloomberg Environment. “Superfund is just one thing.”

The EPA’s brownfield grants program, which gives developers and other applicants monetary incentives to redevelop sites that might be or are contaminated, requires applicants to address how the grant will support the community’s environmental justice goals.

But, Michael Goldstein, managing shareholder of the Goldstein Environmental Law Firm in Coral Gables, Fla., is still concerned about the potential for gentrification at those sites. His firm focuses on legal, consulting, and project management for environmental matters.

The EPA’s Superfund program works to clean up more than 1,300 of the country’s most contaminated sites, from landfills and former manufacturing plants to harbors and waterways.

Before the Trump administration put its mark on the EPA’s Superfund program, redevelopment was generally separate from the cleanup process.

“To put redevelopment in the same sentence as Superfund was an oxymoron, [but] this is changing now,” Goldstein said.

Since former Administrator Scott Pruitt launched a Superfund task force in 2017, the EPA has made its technical guidance more practical for developers, removed obstacles to cleanup, and dedicated staff to redevelopment projects to get them moving quickly, he said.

“They weren’t doing anything,” Ali, who is now senior vice president of climate, environmental justice, and community revitalization for the Hip Hop Caucus, told Bloomberg Environment. “That was one of my concerns.”

At the sites that are suitable for residential use, local government has a prominent role in shaping what kind of housing gets built and whom it targets, Badenoch said. The federal government can also weigh in by putting conditions on brownfield grant awards or loans, to try to limit gentrification.

“We have to find ways to ensure that everyone benefits from the program, not just because it’s good policy, but because from an equity perspective, we’re taking public resources—tax dollars—and using that to subsidize privately financed cleanup,” Goldstein said.

“Especially in a place like New York City, that means the green light to grab land,” she said.

When the EPA was considering naming the Gowanus Canal a Superfund site, active redevelopment efforts slowed down, but speculation increased, Aronowsky said. 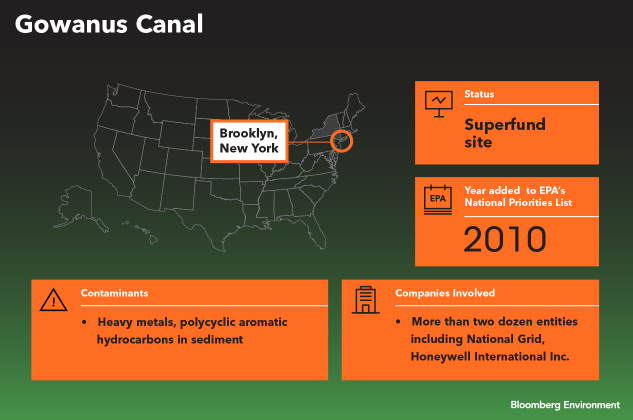 Brooklyn’s Gowanus Canal is nearly two miles long. Starting in the mid-1800s, it was a major industrial transportation route and a dumping ground for paper mills, tanneries, and chemical plants.

Since the EPA added the site to its National Priorities List in 2010, a Whole Foods grocery store has moved in, bringing solar and wind powered facilities. New trees have been planted and green infrastructure improvements have drawn attention to the Gowanus Canal, Miller said.

That puts some residents, especially renters and elderly populations, at risk for displacement in the coming years, according to Miller. A New York City Department of City Planning framework for the Gowanus Canal prioritizes new, denser housing that creates and preserves affordable units.

“Affordable” is relative, Miller and others said, and potentially out of reach for many existing residents.

“We are working closely with the community and local elected officials to ensure the neighborhood remains mixed-use while becoming more inclusive and sustainable,” Joe Marvilli, a spokesman for the department, told Bloomberg Environment in an email.

Gentrification was a concern for the EPA in the early 2000s as it started investing millions in brownfields grants, Tim Fields, a former senior EPA official, told Bloomberg Environment. After study, the agency concluded brownfield redevelopment wasn’t exacerbating gentrification.

“It was, in fact, helping many communities to be revitalized,” he said.

Gentrification isn’t as much of an issue at Superfund sites “because the biggest concern by people in the community is that the threat posed by that Superfund site is being removed,” Fields, now a senior vice president at consulting firm MDB Inc., said.

“The mandate is primarily to remove the serious public health threat,” he said.

In fewer than 20 cases, the EPA has had to relocate people because environmental contamination made their homes unsafe, Fields said.

“One of the last things you want to do is relocate people because you can’t guarantee that those community members will be able to stay together,” he said.

East Chicago on an Upswing

Some residents welcome the influx that comes with cleaning up long contaminated properties.

Jackie Brown, who lives on the USS Lead Superfund site in East Chicago, Ind., said people who lived there decades ago—when there were more small businesses and residents—would be happy to see redevelopment.

The state and U.S. Department of Housing and Urban Development evacuated hundreds of families from part of the site where the soil had become toxic in 2017.

“Redevelopment would be a great opportunity and a great addition, and I think the community deserves it,” she told Bloomberg Environment. 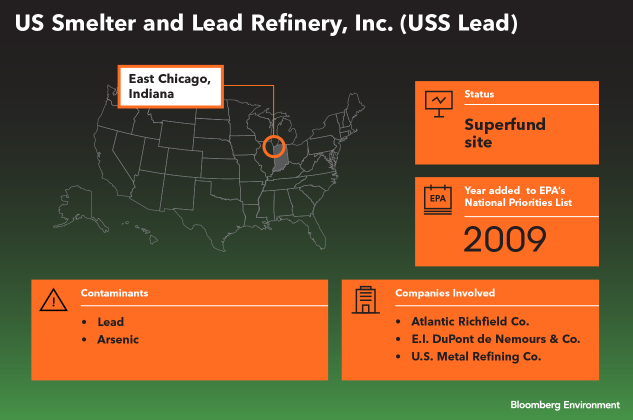 Fields is working with other firms on the future of the East Chicago site.

They anticipate a job training center to replace the evacuated neighborhood once the lead is cleaned up. On other parts of the site, where single-family homes and a few businesses are located, the Lake County Indiana Economic Alliance envisions additional mixed-income housing, with affordable units included.

Fields’ firm, MDB Inc., is working closely with East Chicago’s mayor, the EPA, and others as a consultant for the site.

“There’s a real focus on cleanup, but also there’s a focus on trying to get to revitalization,” he said.