A Pentagon task force said Wednesday it expects the number of installations potentially polluted by the so-called “forever chemicals” to increase beyond the 401 currently identified.

Meanwhile, the PFAS task force found no viable replacement for the firefighting foam that contains the contaminants despite months of searching and testing, said Bob McMahon, the assistant secretary of defense for sustainment and chairman of the panel, which is wrapping up its work.

The two findings are likely to be included either in an forthcoming interim PFAS task force report now being wrapped up or a final report slated for the end of December or early January. Defense Secretary created the task force in July as the department faces potentially widespread pollution that could endanger troops’ health and require costly cleanup. 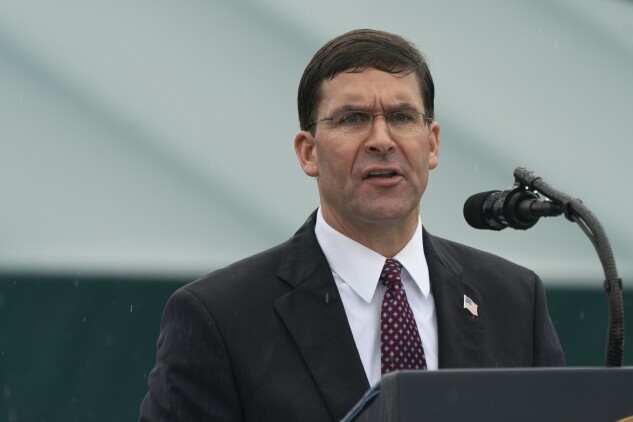 “We have talked for an extended period of time about 401 installations,” McMahon told reporters at the Pentagon. “What we did, as part of this process, we think there’s probably more installations than that, and I’m not ready to tell you what that number is.”

The Pentagon undercounted National Guard sites including armories where there has been a known or suspected release of PFAS chemicals, he said. The original estimate of 401 facilities was provided to Congress and could require a $2 billion cleanup, according to an estimate by Maureen Sullivan, the deputy assistant secretary of defense for environment.

McMahon declined to characterize how many more installations could be added to the list.

Esper created the task force as one of his first acts as defense secretary and ordered it to examine ways to mitigate or replace the aqueous film-forming foam, or AFFF, that has caused much of the PFAS pollution at military bases across the country. Firefighting is key to the military as it works with munitions and fuel supplies on aircraft and ships.

No replacement has been found but Sullivan, who also briefed reporters, said that Pentagon research will continue even as the task force disbands. McMahon is retiring and leaving the Pentagon.

McMahon showed a vial with liquid AFFF and another with a thick potential alternative. He turned the alternative upside down to show how it stuck to the glass and could not easily be spread onto fires. Other tests showed AFFF put out a fuel fire in 30 seconds while two alternatives took 55 and 70 seconds.

“What that means is that although ultimately they worked not in the time frame that we need,” he said.

With no other options, the Pentagon has stopped training with AFFF and uses it only for real fires. Sullivan said it has only been used twice this year by the military.