An employee inspects machinery at a coatings manufacturing facility in Buk, Poland, on July 5, 2016.
Photographer: Bartek Sadowski/Bloomberg via Getty Images

Investors are increasingly worried that may face an unsustainable burden of environmental liabilities from a class of chemicals found in groundwater aquifers and other sites across the country.

Estimates of Chemours’ liabilities related to the chemicals, known as per- and polyfluoroalkyl substances, or PFAS, range from the company’s figure of up to $802 million, to one analyst’s calculation of more than $160 billion—more than 15 times the company’s highest-ever market capitalization.

Investors, regulators, and the public will get a better sense Nov. 4 of how big Chemours thinks its problems are, when the company releases third-quarter earnings and updates its liability estimates.

“The problem is nobody knows what this looks like,” said Christopher Perrella, a chemicals industry analyst with Bloomberg Intelligence. “You can get some mind-boggling numbers on this.”

Multiple representatives with the company declined to comment for this story.

PFAS are found in Teflon and Scotchgard, as well as food packaging and firefighting foam. Known as “forever chemicals” because they don’t break down in the environment and accumulate in the body, they have been linked to health problems including higher cholesterol, birth defects, and cancer, according to the Environmental Protection Agency.

Chemical companies have been making PFAS for decades, but the issue has become more prominent over the past few years with more knowledge about the substances’ prevalence and their potential danger. As scientists learn more about the health effects of the chemicals, states have been setting their own stricter PFAS safety levels.

And public awareness of the problem is only expected to grow after this month’s release of the film “Dark Waters,” starring Mark Ruffalo, which highlights PFAS contamination in West Virginia.

“I think the biggest threat to the companies is the cleanup liabilities,” according to Jeffrey Dintzer, a partner at the law firm Alston & Bird LLP who is defending some of the companies that made firefighting foam.

Once regulators set binding safety standards, “good luck,” he said. “There will be cleanups all over the place.”

Chemical companies face two huge, unresolved variables that will decide the ultimate size of their PFAS liabilities: how bad the chemicals are for people and the environment, and how much the companies can be blamed for them. Chemours faces a third unknown: the nature of its relationship with its former parent company.

Chemours was spun off from in 2015, taking with it DuPont’s performance chemicals business and its PFAS liabilities. Chemours is now suing its former parent, alleging DuPont lied when it estimated the maximum amount of liabilities. Chemours says DuPont did this to make the new company appear solvent, a requirement for spinoffs under Delaware law.

“It has since become clear that DuPont’s supposedly ‘maximum’ numbers were systematically and spectacularly wrong,” Chemours’ attorneys write in their initial complaint.

Chemours wants the court to cap how much of its former parent company’s liabilities it would have to cover or, alternatively, force DuPont to pay it nearly $4 billion.

“I think it’s trying to get out from under that indemnification agreement,” Bloomberg Intelligence’s Perrella said. “It’s one of many tactics to try to get this back on DuPont.”

Nearly 200 water utilities across 35 states reported to the EPA that their samples turned up at least one of the thousands of PFAS, according to data the agency published in 2017. Much of the contamination has been found in and around military bases, which use fire-suppressing foam, and near facilities that used or manufactured PFAS.

The EPA in 2016 recommended consuming no more than 70 parts per trillion of two widely used PFAS in drinking water over one’s lifetime. This was an advisory level and not legally enforceable. But knowing the EPA considers higher concentrations to be unsafe put the companies involved in the PFAS market under the spotlight—not just Wilmington, Del.,-based Chemours, but also , DuPont, and others.

In 2017, Chemours and DuPont settled roughly 3,500 lawsuits over PFAS waste from a former DuPont manufacturing plant in West Virginia. The two companies agreed to pay $670 million, though this didn’t settle all the claims in this consolidated case. Before the spinoff, DuPont predicted the case would cost Chemours a maximum of $128 million, including legal fees, according to Chemours’ lawsuit against DuPont.

Chemours is also a defendant in a lawsuit in South Carolina from dozens of water utilities, municipalities, and individuals over PFAS in firefighting foam. Hundreds of other lawsuits have been filed in state and federal courts in Ohio, California, New Jersey, and elsewhere.

“It could be existential for some of these companies,” Dintzer, from Alston & Bird, said.

DuPont is standing by its indemnification agreement. Its current involvement with PFAS is “extremely limited,” company spokesman Dan Turner said. Chemours has “clear obligations” to indemnify DuPont for liabilities associated with its performance chemicals business under the companies’ separation agreement, he said.

Chemours’ stock price—which had already declined since the beginning of the year—fell 3.8% the day a Delaware court judge unsealed the company’s complaint against DuPont, first filed May 13. Chemours’ shares now trade for four times its previous 12 months of earnings, compared to an average ratio of 25 for specialty chemical companies as a whole, according to data compiled by Bloomberg. 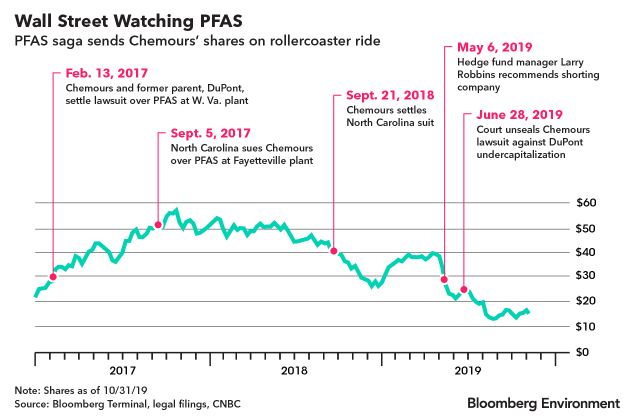 Since the beginning of 2017, President and Chief Executive Officer Mark Vergnano and 10 other top Chemours executives have sold more than 380,000 shares in their company on net, according to data compiled by Bloomberg, although they have been buying some shares in recent months. Vergnano himself purchased 44,000 shares of the company in June, less than a month after the company’s lawsuit against DuPont.

“Some have implied that the lawsuit speaks to our insolvency. This could not be further from the truth,” Vergnano said during the company’s second-quarter earnings call in August, referring to Chemours’ lawsuit against DuPont. “Nowhere in the complaint is it alleged that Chemours currently fears insolvency, because we do not.”

Some outside the company think it should.

Larry Robbins, founder and CEO of $11 billion hedge fund Glenview Capital Management, told an investing conference in May that he thinks Chemours is “facing a liability that we think is worth potentially, substantially, all of its market cap.” He recommended short-selling the shares.

John Inch, an analyst with the market research firm Gordon Haskett Research Advisors LLC, said last month the company may have to pay out more than $160 billion over the next two to three decades, with roughly half of that coming from environmental remediation, Bloomberg News reported.

New Jersey also has its doubts. In an enforcement case over a former DuPont site in the town of Pompton Lakes, state officials said they’re worried that Chemours may not be able to pay for cleanup because PFAS issues “account for a very substantial portion of their environmental liabilities nationwide” and this “directly impacts the company’s solvency,” the state said in its complaint.

In some ways, the uncertainty around the health and environmental impact of PFAS works in Chemours’ favor because its liabilities may not be as large as many fear, Dintzer said.

“There’s so many variables with regard to these particular chemicals,” he said. “Maybe it will just be a lot of legal fees.”

“Management is making up these numbers and making very subjective guesses as to the likelihood of that number,” he said.

If Chemours’ PFAS costs balloon into the hundreds of billions of dollars, the company will have few options to mitigate this risk. Environmental liability insurance probably isn’t an option for a company of this size, said Christopher Alviggi, senior vice president of the insurer NFP Corp.

Alviggi specializes in indemnifying corporate real estate buyers from any contamination they may not know about at the time of sale. He said the extent and nature of PFAS contamination is so unknown—and, at the moment, unknowable—that it would be impossible to insure.

“I don’t know where it goes from here,” Alviggi said. “Right now, we’re all in panic mode because nobody knows how this works.”

—With assistance from Amanda Iacone.