How extensive and risky is fluorochemical contamination? How are these chemicals affecting people’s health?

Those are among the questions the Environmental Protection Agency, the Defense Department, and other environmental research agencies are jointly addressing to assist public health officials, wastewater utilities, and military installations.

“We need more research,” Mark Levine, Vermont’s health commissioner, told Bloomberg Environment. “We don’t want to minimize what exposure could do, but we don’t want people to get overly concerned.”

Fluorochemicals are fire-resistant, heat-resistant, and stain-resistant and are used in hundreds of consumer products as well as in firefighting.

Detection methods, cleanup treatment options, and health risks from ongoing and future exposure are all being examined at the EPA, according to a Dec. 7 internal memo obtained by Bloomberg Environment.

The Department of Defense, National Institutes of Environmental Health Sciences (NIEHS), National Toxicology Program, and Centers for Disease Control and Prevention are among the other agencies also developing information to help states, municipalities, military sites, and other places.

A Bloomberg Environment analysis of EPA water contaminant data found that 65 water utilities across 24 states and territories had at least one sample that came back above the agency’s lifetime health advisory of 70 parts per trillion (ppt) for perfluorooctane sulfonate (PFOS) and perfluorooctanoic acid (PFOA).

Collectively, these drinking water utilities serve more than 6 million people across the country, and PFOS and PFOA are merely two among thousands of fluorochemicals.

If the EPA’s advisory level is protective, then most U.S. citizens are not in danger, according to Rainer Lohmann, director of the University of Rhode Island’s Superfund Research Center.

States, municipalities, and federal agencies already have provided bottled water, closed sources discharging the chemicals, or begun to treat water to reduce the pool of people exposed, he said.

Health advisory levels aren’t enforceable and might not reflect the best science. The central question is whether they are safe enough, Lohmann told Bloomberg Environment. Some U.S. states and EU countries have set lower recommended or enforceable limits for fluorochemicals, he said. 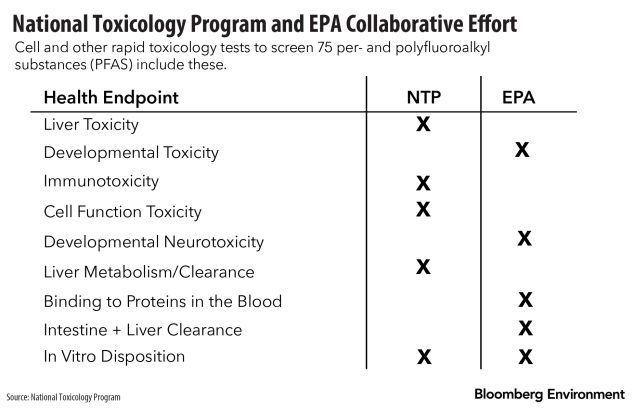 Researchers have found at least 3,000 varieties of fluorochemicals in the environment, Linda Birnbaum, director of the NIEHS, recently told Bloomberg Environment. The group increasingly is called perfluoroalkyl and polyfluoroalkyl substances (PFAS), a name that reflects their diverse carbon-chain lengths, structures, and molecular combinations.

These chemicals are, or have been, used to make stain-resistant upholstery, waterproof apparel and footwear, and grease-resistant food packaging such as pizza boxes, popcorn bags, and hamburger wrappers.

The largest single source of known contamination is around training and firefighting sites where aqueous film-forming foam is used in particularly dangerous aircraft, shipboard, and oilfield fires.

The chemicals don’t easily degrade in the environment, and the number of scientific studies showing that PFOS and PFOA cause health problems in people and animals is growing, Birnbaum said.

Some people exposed to high concentrations of the chemicals have experienced high cholesterol, colon and thyroid problems, testicular and kidney cancers, and elevated blood pressure during pregnancy, according to the Centers for Disease Control and Prevention.

“We don’t know a lot about the health effects of others,” Birnbaum said, referring to the thousands of fluorochemicals beyond PFOS and PFOA.

A multiagency committee within the White House’s National Science and Technology Council will meet in February coordinate research efforts, Michael DeVito, acting chief of the National Toxicology Program, said Dec. 7 during a meeting of the program’s Board of Scientific Counselors.

Scientists from these agencies and researchers with grants have described other efforts at meetings Bloomberg Environment has covered during the past six weeks.

For example, NIEHS and its National Toxicology Program will use computer models to predict the chemicals’ biological and health effects, as well as conduct animal experiments.

The EPA’s Office of Research and Development plans to analyze 75 fluorochemicals through screening studies, according to the agency’s Dec. 7 memo.

The EPA’s toxics office is organizing data and revisiting chemical categories last updated more than five years ago, Tala Henry, a division director in the EPA’s Office of Pollution Prevention and Toxics, said at a Dec. 6 meeting on the agency’s new chemicals program.

The agency’s Office of Land and Emergency Management is working on PFAS cleanups at 32 federal Superfund sites in cooperation with states, Thomas Sinks, who directs EPA’s Office of the Science Adviser, told an agency board.

The carbon-fluorine bonds in fluorochemicals are among the strongest in nature, “an impenetrable fortress,” said Field, the Oregon State University professor, during the same conference at which Mills spoke.

Meanwhile, the Agency for Toxic Substances and Disease Registry has developed materials for health care providers and the general public.

More research, however, could spur enforcement actions and lawsuits. 3M, the Chemours Co., and DuPont are among the companies that already face lawsuits because of contamination from fluorochemicals they have made in the past but voluntarily stopped producing.

Many other companies, including Angus Fire, Dafo Fomtec AB, Solvay Specialty Polymers Italy S.p.A., and Asahi Glass Co. Ltd., have used either the older phased out chemicals or their newer replacements.

—With assistance from Sylvia Carignan, Steven Gibb, and David Schultz.

This is the second part of a Bloomberg Environment series looking at the impact of fluorinated chemical contamination on communities and businesses.

(Adds list of fluorochemical uses in the fourth paragraph and adds a graphic.)

To contact the reporter on this story: Pat Rizzuto in Washington at prizzuto@bloombergenvironment.com