A home was destroyed by hurricane Irma in September 2017 in Marathon, Fla.
Photographer: Joe Raedle/Getty Images

Congress has still been unable to reach a deal on the federal flood insurance program just weeks before it expires, opening the possibility that millions of homes and businesses could lose coverage as hurricane season kicks into high gear.

Nearly all lawmakers agree the insurance program shouldn’t be allowed to lapse, especially at this time of year. But some argue that they shouldn’t grant yet another extension without overhauling what many agree has become an unsustainable system. They have until July 31 to figure something out.

The last-minute brinkmanship is causing huge headaches for Allstate Corp., The Hartford Financial Services Group Inc., Farmers Insurance Group, and other companies that partner with the Federal Emergency Management Agency to sell flood insurance policies. They have been pushing Congress to overhaul the financially troubled program and not simply keep extending its expiration date. 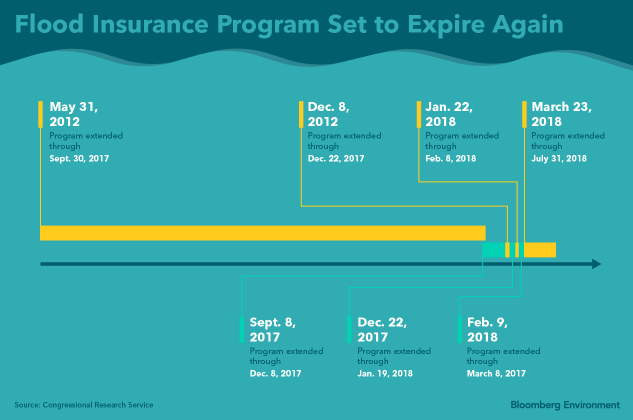 Sen. John Kennedy (R-La.), whose state is one of the most reliant on the program, said he has agreement from all but two senators to move forward on a six-month extension.

Though he declined to name the holdouts, Kennedy said that as long as they object, the Senate won’t be able to move on the expedited schedule necessary at this point with just days before expiration.

“Two of my colleagues want to reform the program. So do I. But we’re not going to get it reformed by July 31,” he told Bloomberg Environment July 18. “I’m trying to do everything I can to kiss their rear end to get them to remove their objections.”

With the possibility of a lapse just days away, insurers are now desperate for any type of action from lawmakers.

“It’s inconceivable for there to be a lapse in the program in the middle of hurricane season,” Nat Wienecke, head of federal government relations for the Property Casualty Insurers Association of America, said. “How do you talk to the customer and say, ‘Don’t worry about the storm, but you don’t have any coverage?’”

And even though the holdup is on Capitol Hill, Wienecke said, policyholders will hold their insurance agents accountable if a lapse occurs.

“This kind of lurching around creates reputational risk for these companies,” he told Bloomberg Environment. “All the consumer knows is, ‘My insurance company called and said I don’t have insurance anymore.’”

Michael Hecht, CEO of Greater New Orleans, the city’s economic development group, said insurers are holding steady, given Congress’ track record over the past year of reaching one last-minute agreement after another.

“There’s an implicit assumption in the market right now that the program will continue in some form or fashion,” Hecht, whose group has been pushing Congress to keep premiums affordable, told Bloomberg Environment. “As long as there’s not a lapse, the market will not be spooked.”

State of Play in Congress

As recently as this month, Republican staffers in the House told Bloomberg Environment they still held out hope they could get a long-term extension to the president’s desk.

Last year, the House passed its version of a comprehensive flood insurance overhaul bill, H.R. 2874, to extend the program out to 2022. It would attempt to shore up its finances by, among other things, raising premiums and trimming subsidies for properties that have flooded multiple times.

“A very small percentage of buildings cost a quarter of FEMA’s budget,” Rep. Peter DeFazio (D-Ore.) said about discouraging rebuilding in flood-prone areas. “Will it save money? I think it’s a no-brainer that it will. Some people have been rebuilt multiple, multiple times.”

Both Republican and Democrats say that bill won’t fly in the Senate.

However, there are signs the House has now acknowledged the clock has run out and yet another short-term extension is the only option. Rep. Steve Scalise (R-La.), the House majority whip, introduced a bill earlier this week that would extend the flood insurance program by four months, to just past this year’s midterm elections.

Though Scalise said in an email to Bloomberg Environment that a long-term renewal of the program is his ultimate goal, he said this short-term extension is crucial so “we don’t have to worry about a lapse for the remainder of this hurricane season.”

Kennedy said he is willing to take extreme actions if a lapse does occur.

“I will use all of my power as a United States Senator to get it done,” he said. “I will raise more hell than they can possibly imagine.”

A geographical, not partisan, conflict is what’s behind Congress’ inability to renew the program for more than a few months at a time.

Lawmakers from coastal areas largely prefer minimal changes to the program and fear that any overhaul could lead to skyrocketing premiums. Landlocked lawmakers, however, say the program encourages building in risky areas.

The disagreement between the two chambers can be seen as a function of the differences in their composition.

A little over 100 members of the House, around one-quarter of the chamber, represent coastal districts, according to an analysis of congressional district maps. Yet 46 senators represent coastal states, more than enough to dictate the fate of any piece of legislation.

A non-binding test vote last week in the Senate on a six-month extension garnered only five “no” votes: Sens. John Barrasso (R-Wyo.), Mike Enzi (R-Wyo.), Jeff Flake (R-Ariz.), Mike Lee (R-Utah), and James Lankford (R-Okla.). Though the resolution was largely symbolic, it signaled to the House that yet another short-term extension would be met with overwhelming Senate support.

Meanwhile, as the list of historic, catastrophic storms grows longer, the program has become, essentially, insolvent.

When Congress created the National Flood Insurance Program in 1968, it was supposed to cover its own costs through premiums.

But instead, Congress has had to allocate more than $30 billion over the years to allow it to pay out claims. It gave the program this money with the intent that FEMA, the agency that runs it, would later pay it back during years with fewer claims. However, last year, Congress canceled more than half of this $30 billion debt, an acknowledgment that those quieter years may never come.

“It’s not run like any other insurance,” Wienecke said. “Its underwriting standards are not based on any actuarial technology that any company would use in today’s world.”

“That said,” he added. “The only thing worse than no reforms is a lapse.”

Frank Nutter, president of the Reinsurance Association of America, said FEMA purchased $1 billion worth of reinsurance for the program at the beginning of 2017 and then proceeded to use up all of that coverage during last year’s catastrophic storms.

“It’s not sustainable,” he told Bloomberg Environment. “One would hope the program won’t continue without some effort to make it more financially sound.”