People living in the West can’t get a break from inhaling dirty air caused by fires, even when the wildfire season comes to an end.

This summer they were engulfed in smoke from a number of catastrophic fires. And this fall they could find themselves enshrouded in another smoky haze—a result of fires planned and deliberately set by state and federal officials to ward off the more dangerous wildfires that erupt during the dry summer season.

Last month, Missoula, the Montana city nestled in the Northern Rockies and surrounded by seven wilderness areas, found itself engulfed in smoke from a planned burn in neighboring Idaho that went awry because the wind slowed down, causing the smoke to collect in the valley and as far across the sprawling county as Seeley Lake.

In Missoula, the concentration of airborne particles—which the EPA uses to measure smoke—during the burn exceeded for two days the air quality level the agency considers healthy, creating worse smoke in the valley than the city experienced during the 2018 wildfire season.

Missoula, say most state officials and researchers, was an exception to planned burns carefully set to get rid of rotten wood, tree stumps, and other forest debris that fuel larger and deadlier wildfires that typically occur during the summer months.

But even planned burns that go off without a hitch cause air pollution. And researchers say they don’t yet know the health effects of breathing pollution from these type of events.

“We unfortunately don’t have data that compares emergency room visits from prescribed burns with those from wildfires,” said Rachel Hinnenkamp, an epidemiologist with the Montana Department of Public Health and Human Services, who tracked hospital visits that were caused by smoke given off by 2017 wildfires with previous years. 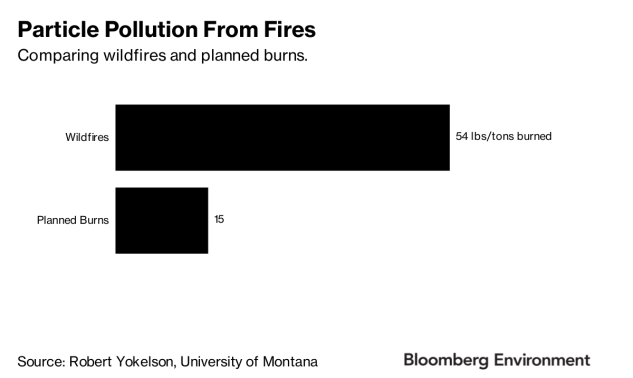 Planned burns, or prescribed burns as they are known, take place normally in the fall and spring and when conditions are cooler, vegetation and fuel moisture levels are higher, and weather conditions are more stable.

In contrast, wildfires normally take place during the summer months. But in recent years, wildfires have started earlier and lasted longer, researchers say.

Wildfires are increasing in frequency and intensity in the West, owing to warmer temperatures, dry summers, and less snow melt, Anthony LeRoy Westerling, a professor of complex systems management with the University of California, Merced, told Bloomberg Environment.

Adding in the planned burns means the public is experiencing more smoke throughout the year.

More particle pollution on average is released from wildfires than from prescribed burns, said Robert Yokelson, an atmospheric chemistry professor at the University of Montana, who has been studying the differences in the two types of fires.

Smoke from relatively small and controlled planned burns stays in the air for about a week, while smoke from the largest wildfires can linger for months, according to George Jozens, spokesman for the Coconino National Forest in Arizona, which experienced a milder wildfire season this year.

Burns Can Be Managed

Residents living near planned burns can still be affected by smoke, but its harmful effects can be averted or minimized with careful planning, Westerling said.

“It’s a tradeoff between chronic low-level emissions from managed fires in the spring and fall or else really intense exposure to high levels of particulates given off by large wildfires,” he said. “There is no world with no smoke. It’s about how much and when.”

The key to planned burning lies in managing the path taken by smoke given off by planned burns, Sarah Coefield, an air quality specialist with the Missoula City-County Department of Health, told Bloomberg Environment.

The planned burns have to take place during the day so warmer temperatures coupled with a favorable wind can blow the smoke away from communities and especially valleys, like Seeley Lake, where a drop in nighttime temperatures can cause the smoke to settle.

‘We Don’t Have a Choice’

Coefield, a native Montanan, who has seen wildfires increase in intensity since 2000, educates businesses and schools in Missoula County on preparing for smoke as well as for fires.

Fires are a natural part of the environment: What is not normal is a fire-free existence, Mark Finney, a research forester with of the U.S. Forest Service’s Rocky Mountain Research Station in Montana, told Bloomberg Environment. Planned burns coupled with thinning should be a regular part of fire prevention.

“We don’t have a choice: We can use prescribed burning that will reduce future risk of fires or we can have wildfires that will produce smoke and other hazardous pollutants, destroy homes and habitats for wild plants and animals,” Finney said.

(Corrects third paragraph to say Missoula, not Seeley Lake, was most directly affected by smoke from planned burns. Also, corrects the extent to which air quality level was exceeded in the fourth paragraph.)