Fifty years ago and five miles off the coast of Santa Barbara, Calif., an oil well blew, cracking the sea floor and sending 3 million gallons of crude oil into the water.

The oil coated 35 miles of coastline and was so thick on the water it muted the sound of waves.

But the largest oil spill in the nation at the time also amplified drilling concerns and helped trigger the modern environmental movement, quickly leading to the National Environmental Policy Act of 1970 and, a few months later, the formation of the Environmental Protection Agency.

Half a century after the Jan. 28, 1969, spill, California environmental groups and politicians find themselves struggling with the effects of climate change and fighting Trump administration rollbacks to those protections.

They are also in another oil fight: The Bureau of Ocean Energy Management plans to offer oil and gas leases along nearly the entire U.S. coast.

“Here we are 50 years later looking at potentially a whole new generation of offshore drilling,” said Linda Krop, chief counsel for the Environmental Defense Center, which was founded after the Santa Barbara spill. “Now we have the same threat all over again.”

A draft environmental impact statement on the plan was due in January, but delayed by the government shutdown.

“We are partnering with groups around the state and across the country to try to stop this,” Krop said. “We are producing a lot of oil and gas now to the point that we’re exporting. We don’t need to open up the entire coast.”

“We are creating a wall,” said state Sen. Hannah-Beth Jackson (D), who authored one of those bills. “California has basically closed its doors to transporting any new oil onshore. We’re closing our borders.”

President Donald Trump’s 2017 executive order for an “America-First Offshore Energy Strategy” said it should be U.S. policy “to encourage energy exploration and production, including on the Outer Continental Shelf, in order to maintain the Nation’s position as a global energy leader and foster energy security and resilience for the benefit of the American people.” 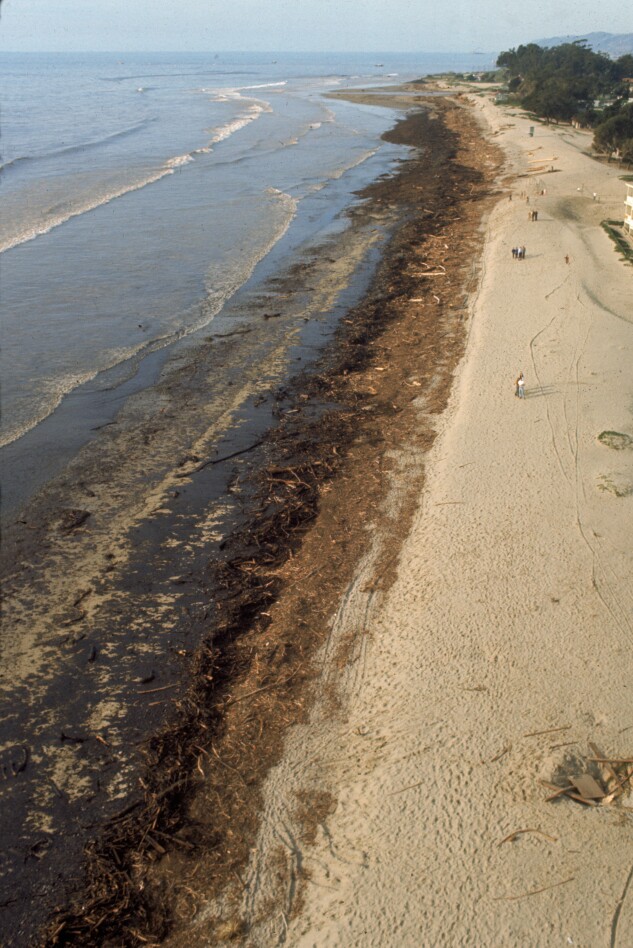 “In that spirit, the employees of California’s oil and gas industry are fervently committed to continuous safety improvements in all of our operations, whether that be through innovative technologies or by partnering with the dozens of federal, state and local agencies that regulate oil & gas operation in our state,” Reheis-Boyd said in a statement. “Our number one priority as an industry is in maintaining the safety and environmental integrity in the communities where we operate.”

‘The Pall That it Cast’

Jackson, who represents Santa Barbara, was a college student when the 1969 oil spill hit.

“I remember the pall that it cast over this beautiful part of the state,” she said. “The oil was dark, a viscous, black crude oil that had taken over the coastline.”

The oil flowed until Feb. 7 and killed 15,000 seabirds. Dolphins, seals, and sea lions were also poisoned.

In response, the California Coastal Commission was created, as was an environmental studies program at University of California, Santa Barbara. The State Lands Commission also banned offshore drilling, a rule that lasted 16 years.

Federal authorities also admitted they had given the company, Union Oil, a waiver so they did not have to entirely encase the pipe as normally required by regulations to prevent blowouts.

The “acceptance of responsibility was the start of a long chain of federal concessions admitting that it was at fault to some degree,” according to a paper from the University of California at Santa Barbara.

Oil and gas regulations were strengthened. And they were again when the Exxon Valdez spilled 11 million gallons of crude oil in Alaska 30 years ago this March. The Oil Pollution Act of 1990 gave EPA more authority to prevent and respond to oil spills.

But that hasn’t ended spills.

The 2010 Deepwater Horizon spill in the Gulf of Mexico released 100 million gallons. And in 2015, Santa Barbara’s environment was again harmed when an oil pipe burst releasing 142,000 gallons of oil just before Memorial Day vacationers were about to arrive.

Environmentalists say it’s another example of why offshore oil and gas drilling has to stop and the focus switched from fossil fuels to solar, wind, and other energy sources.

“We need to commit to weaning off oil and developing renewable energy, which isn’t lethal to the planet,” Jackson said.

“It’s 50 years on,” Pellow said. “The world has changed. The crisis is even more intense, even more global, more urgent today. There’s a greater diversity of humanity affected by this crisis.”