won a closely watched trial over its accounting for the financial risks of climate change, in an outright rejection of New York state’s claim that the energy giant engaged in a cynical scheme to mislead investors for years.

Tuesday’s ruling, by New York Supreme Court Justice in Manhattan, is a blow to the state’s attorney general, . In the securities fraud lawsuit, filed in October of last year, New York accused Exxon of lying to shareholders about its use of a “proxy cost” for carbon in accounting for future climate change regulation to make them think the company was being more prudent than it was.

The AG’s office “failed to prove, by a preponderance of the evidence, that ExxonMobil made any material misstatements or omissions about its practices and procedures that misled any reasonable investor,” Ostrager wrote in a 55-page ruling. New York produced no testimony from an investor who claimed to have been misled, the judge said.

Nor did it meet a lower bar. As part of its case, New York invoked the state’s Martin Act, which empowers officials to target a wide range of corporate behavior that could hurt shareholders. While New York argued that Exxon had intentionally misled shareholders, under the act it didn’t have to prove intent, or even that any investors were deceived.

The judge said the AG’s own witnesses ended up giving testimony that backed Exxon’s defense, and that the state’s experts were “eviscerated” on cross-examination and by the company’s experts.

Exxon said in a statement that Ostrager’s decision showed it gave its investors “accurate information on the risks of climate change” and that New York “failed to make a case even with the extremely low threshold of the Martin Act” in its favor.

“Lawsuits that waste millions of dollars of taxpayer money do nothing to advance meaningful actions that reduce the risks of climate change,” Exxon spokesman Casey Norton said in the statement. “ExxonMobil will continue to invest in researching breakthrough technologies to reduce emissions while meeting society’s growing demand for energy.” 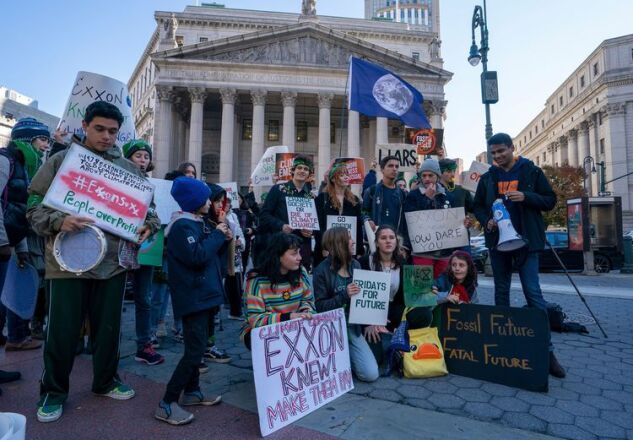 Demonstrators gather across the street from the New York County Courthouse, where the Exxon Mobil trial took place, on Nov. 1.
Photographer: Don Emmert/AFP via Getty Images

New York claimed Exxon used two sets of numbers -- one public, one secret -- to account for greenhouse gas emissions. During the trial, Exxon’s lawyer, , said the state was trying to cook up a discrepancy where none existed by conflating two sets of figures that served different purposes. Wells said New York had been swayed by environmentalists and others out to vilify the company and called the whole case a “cruel joke.”

“It’s almost like the Russians trying to interfere with the election,” he told Ostrager in his opening argument in October.

Exxon “disclosed its use of both the proxy cost and the greenhouse gas metrics no later than 2014,” the judge wrote in Tuesday’s decision.

of Carter, Ledyard & Milburn LLP, who wasn’t involved in the case, said the ruling was “a very welcome departure from the long line of cases and forced settlements under New York’s Martin Act.” In an email, he called the act “a truly atrocious law which alleges liability without any proof of intentional fraud, or reliance by anyone, or any of the essential elements of a federal law fraud case.”

The decision “just shows what many suspected all along,” said Brooklyn Law School professor James Fanto, that the lawsuit “was nothing more than an enforcement action designed to harass the defendant and to please the attorney general’s political base.”

The AG said she was undaunted.

“For the first time in history, ExxonMobil was compelled to answer publicly for their internal decisions that misled investors,” James said in a statement. “The oil giant never took seriously the severe economic impact that climate change regulations would have on the company, contrary to what they were telling the public.”

Asked about a possible appeal, a spokesman for James said the office is still reviewing Ostrager’s decision.

Ostrager said his opinion wasn’t intended to absolve Exxon from responsibility for contributing to climate change through the emission of greenhouse gases.

Exxon got a hint of victory on the last day of the trial when a lawyer for the attorney general said during closing statements that the state was dropping the two most damning of four claims without explanation. The abandoned claims, which had been crucial elements of the case, held that Exxon’s calculations were part of a scheme to mislead and that investors had relied on them when buying the company’s stock.

After the AG’s retreat, what remained for Ostrager to decide was whether Exxon had violated the Martin Act by issuing public statements about proxy costs that were materially misleading. The state couldn’t show that it had.

(Updates with reaction from McTamaney, Fanto and attorney general)