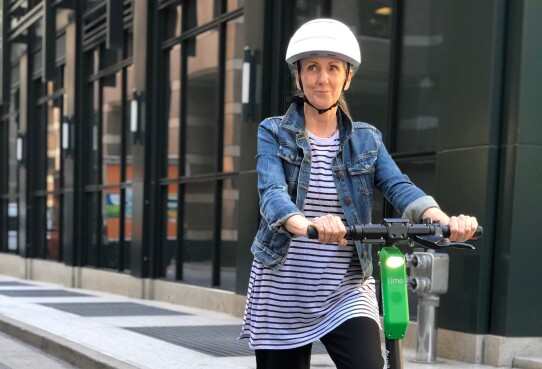 Carol Browner may no longer be in the White House or the EPA, but she’s still engaged in the climate change fight—now, literally on the streets.

“Micro mobility is one of the important pieces of how we combat climate change,” Browner told Bloomberg Environment. “It’s about getting people out of cars and thinking about how we manage our cities and communities.”

Since coming on board in December 2018 as an adviser, Browner helped Lime craft a plan for using 100% renewable energy to charge its global fleet of scooters and electric bikes, mostly by buying renewable energy certificates, said Andrew Savage, the company’s vice president of sustainability.

The company has now hit that goal, even for the “juicers” who pick up scooters, charge them at home, and return them to the street, according to Savage. To date, Lime has bought more than 3,600 megawatt-hours of wind, solar, and small-scale hydro energy, he said.

“Carol advised on the strategy, and she gave us confidence that the approach we were taking was the correct approach,” Savage said.

Browner isn’t being paid for her advisory work, but has taken an equity share in the company, Savage said.

How Green Are Scooters?

Browner is also helping Lime develop ways of recycling the scooters’ batteries and other equipment to shrink the company’s carbon footprint.

Those efforts could help allay claims that e-scooters may have larger total environmental impacts than other types of transportation.

A recent report from North Carolina State University found that about half of a scooter’s environmental impacts comes from mining the raw materials and building the devices.

But Jeremiah Johnson, one of the report’s co-authors, said making scooters that last longer and have recyclable parts “is a potentially high-value opportunity to reduce these burdens.

“If you can build more robust scooters that allow you to swap out parts more easily, then these scooters look like a two-year scooter, as opposed to one year or less. That can have a really big impact.”

Browner also said she wants to help convince local governments that scooters aren’t dangerous to the public. Several cities, including Atlanta, Nashville, and Washington, D.C., have taken steps to at least partly ban scooters or limit their speed, usually out of safety concerns.

But balancing those rules can be tricky, Browner said. For example, she said some evidence shows that, if scooters’ top speed is throttled down, users are more likely to drive them on the sidewalk than in a bike lane, where they can endanger pedestrians.

“It’s complicated,” Browner said. “People need to be educated on the benefits of them. But single-occupancy cars are fast becoming the past.”

Browner’s post-government life also includes being chair of the League of Conservation Voters’ board of directors, a position to which she was elected in March 2014.

As chair—a volunteer role—Browner works with LCV’s 29 other directors on “everything from fundraising to policy positions we take on specific legislation to which candidates we endorse.”

The board is in the process of having “one-on-one fireside chats” with the Democratic presidential candidates, and has met with “eight or nine” candidates so far, Browner said. So far, the group hasn’t settled on an endorsement.

“Right now we’re just making sure that, as they put out climate plans, that they’re serious plans,” Browner said. “Not just a commitment, but a knowledge base on these issues. The next president has a significant opportunity, but they will need to hit the ground running.”

Browner said she took the LCV job because she thinks it’s a good use of her significant clout and high profile.

“I try to use my voice in ways that I think would be the most meaningful,” she said. “It doesn’t mean engaging in everything that comes along. It means picking and choosing where I can have an impact. Electing people who believe climate change is real, using my voice in that way, is extremely important.”

Gene Karpinski, LCV’s president, said having Browner on board has helped open doors for the organization.

“It’s an incredible benefit to LCV to have her as our chair because she’s highly respected and well known, for a whole host of things she’s done over her career,” Karpinski said. “She’s got an incredibly valuable brand, so to speak.”

Browner ran the EPA from 1993 to 2001. She fought congressional Republicans on environmental policies but also worked with the party on amending the Safe Drinking Water Act.

She helped get through a tightening of the Clean Air Act’s National Ambient Air Quality Standards.

Under Obama, she served as head of the White House Office of Energy and Climate Change Policy coordinating environment, energy, climate, and other matters. She was a central figure in the 2009 passage of a cap-and-trade bill in the House that ultimately failed in the Senate.

Even some of Browner’s ideological foes say they admire her approach to governing, which some have criticized as being too industry-friendly.

“While I disagreed with the environmental policies—like cap and trade—she pushed during her tenure under Obama, I appreciated her approach to working with Congress to try to achieve them,” Mandy Gunasekara, a former official in President Donald Trump’s EPA. “After she left, the regulatory expansion regime kicked into high gear.”

“She’s a superb businesswoman,” added Wendy Sherman, former undersecretary of state for political affairs in the Obama administration, who co-founded the Albright Stonebridge Group consulting firm with Browner. “She understands corporate America, but she never loses her principles.”