William Wehrum, left, is sworn in by then-Administrator Scott Pruitt as head of the EPA's Office of Air and Radiation in November 2017.
Photo courtesy of the EPA

EPA air chief Bill Wehrum’s agenda looks similar to that of the energy industry he previously represented, but that doesn’t necessarily cross the boundaries of his recent ethics pledge.

Standard ethics rules—including commitments put in place by President Donald Trump last year—are generally too narrow to prevent Wehrum from working on issues on which he had previously fought the Environmental Protection Agency in court, ethics specialists said. And Wehrum’s critics don’t have much room to challenge his actions because ethics rules ultimately rely largely on administrations policing themselves.

The result is that Wehrum—who worked for a decade as an attorney for Hunton & Williams LLP, now Hunton Andrews Kurth LLP—has relatively free rein to undo or rewrite the Obama-era regulations he previously fought without violating ethics rules.

“These rules have a lot of room for political appointees to pursue policies that benefit their former clients,” Justin Pidot, a professor with University of Denver’s Sturm College of Law who previously worked as deputy solicitor for land resources with the Interior Department during the Obama administration, said.

Wehrum, in a recusal statement signed Sept. 17, pledged to limit his interactions with more than three dozen former clients. The list includes close to a dozen major industry trade groups such as the American Petroleum Institute and the Utility Air Regulatory Group as well as companies in nearly every sector that has business before the EPA’s air office.

But Wehrum can steer clear of violating his ethics requirements so long as he meets with former clients in a group setting and avoids involvement in specific proceedings with those companies.

Wehrum has said he is taking all necessary precautions.

“I am scrupulously complying with my ethical obligations,” he told the New York Times last month. 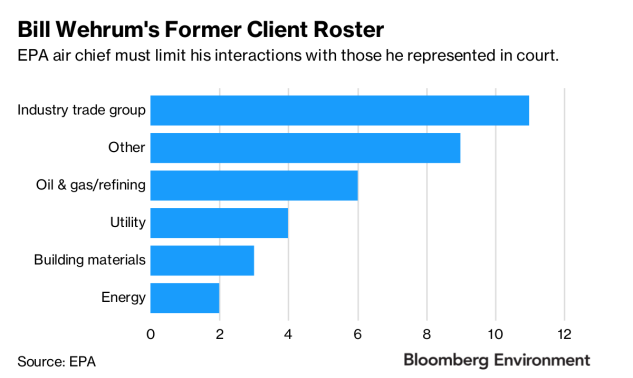 Wehrum initially declined to sign a recusal letter, citing uncertainty about what the ethics rules prohibited. But he ultimately agreed to sign a statement following pressure from Sen. Sheldon Whitehouse (D-R.I.).

“This is a document the Senate and the public were entitled to receive months ago,” Sen. Tom Carper (D-Del.), chair of the Senate Environment and Public Works Committee, told Bloomberg Environment in an email. “Signing a recusal statement ensures that an individual picked to serve the American people cannot work to advance the interests of his or her former industry clients, so this should be an automatic and a no-brainer for any regulator who values credibility.”

But the statement, which tracks with typical ethics language, doesn’t prohibit him from working on general EPA policymaking, such as the agency’s methane limits on oil and gas drilling, ozone standards, and mercury and air toxics standards, Richard Alonso, a former EPA air enforcement official during the Bush administration who now works for Sidley Austin LLP in Washington D.C., told Bloomberg Environment.

The ethics standards aim to prevent someone from switching sides in a lawsuit or enforcement proceeding, Kathleen Clark, a law professor at Washington University in St. Louis who studies legal and government ethics, told Bloomberg Environment.

“What they don’t address is whether it’s appropriate to put in charge of an agency someone whose career has been defined by fighting the agency,” Clark said of the standards.

The resulting problem is twofold, EPA’s critics said. The typical ethics rules can’t cover the scope of Wehrum’s potential conflicts. At the same time, the Trump administration—and the EPA in particular—has pushed the boundaries of hiring former industry attorneys and lobbyists.

“That kind of language is old-fashioned and too narrow. It’s not sized to fit what a regulatory agency like EPA does,” Eric Schaeffer, executive director of the Environmental Integrity Project and a former EPA civil enforcement official, said of Wehrum’s recusal statement.

“Whether or not the actions trip over the letter of the law, they clearly benefit all those interests,” Schaeffer told Bloomberg Environment.

For example, Schaeffer said, Wehrum represented industry clients that criticized the EPA’s “once in, always in” policy that required facilities to continue to control toxic air pollutants even if their emissions drop below the threshold for regulation.

The primary remedy for ethics breaches is for agencies to police themselves and for ethics officials to step in, Austin Evers, executive director of the watchdog group American Oversight, told Bloomberg Environment.

Evers also noted the difference between the restrictions on lobbyists and attorneys.

Under Trump’s ethics executive order, lobbyists are prevented from working on specific issues they lobbied on in the past two years. For example, EPA acting Administrator Andrew Wheeler, a former lobbyist for Faegre Baker Daniels, has to sit out discussions on the Trump administration’s coal and nuclear bailout plans and EnergyStar, according to his May 24 recusal letter.

Wehrum, though, isn’t restricted from working on specific issues he litigated.

He is able to “drive through this loophole,” Evers said, adding that he sees Wheeler and Wehrum’s roles as a distinction without a difference. Wehrum “has been lobbying the agency through the courts at an unbelievable clip,” he said.