This neighborhood in Southeast Chicago along the Calumet River is the proposed site of the Southside Recycling plant.
Photo by Antonio Lopez

Southeast Chicago residents living with lead in their Little League fields and neurotoxins in their air have fought city and state officials for years to prevent a massive metal shredding plant from moving into their neighborhood along the Calumet River.

And now that new EPA Administrator Michael Regan is insisting that community-focused environmental equity will be part of the “DNA” of his agency, their fight over the General Iron plant may be an ideal early test of whether his promises will be kept.

The EPA and the Department of Housing and Urban Development both launched investigations into the plant’s permits and rezoning mandates in 2020 and 2021, which gives President Joe Biden’s administration a chance to weigh in on a conflict that typifies the struggles of communities surrounded by heavy industry.

“This is exactly why we’re making such a huge fuss about General Iron,” said Gina Ramirez, co-chair of the Southeast Side Committee to Ban Petcoke and Southeast Chicago resident. “We would hate to see this continuously happen in the city of Chicago because it’s just furthering segregation, it’s upholding racism.”

The plant is slated to be built in an area that ranked last in an air quality index released by the city of Chicago in 2020, situated squarely in a predominately Black and Latino neighborhood surrounded by smokestacks and trucks.

The plant, rebranded as Southside Recycling, was given the green light by the Illinois EPA and city of Chicago in 2019 to relocate from Chicago’s Lincoln Park. The previous site at Clifton Avenue is next door to a $6 billion residential and commercial redevelopment project called “Lincoln Yards"—also rezoned for development in 2019.

Its proposed new plot on Burley Avenue is across the street from a high school, a park, and a block from the neighborhood’s grocery store, Ramirez said.

“Our health statistics are terrible, the cumulative burden of pollution is very visible if you visit the Southeast side,” Ramirez said. “It shouldn’t take hunger strikes and us talking to the news day in and out.” 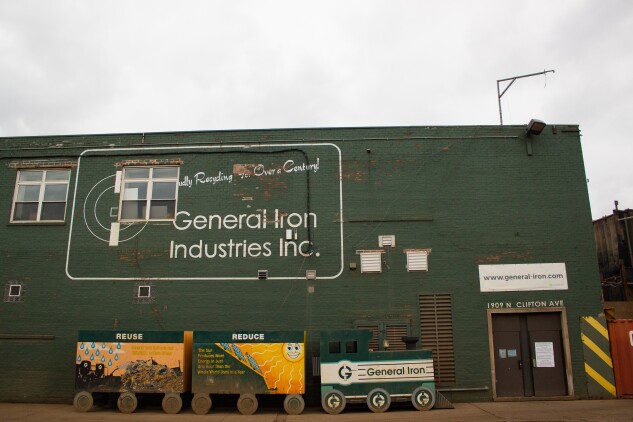 A decision in pending litigation to quash the plant’s construction is due any day now from the U.S. District Court for the Northern District of Illinois, which could decide the fate of Southside Recycling’s permit on civil rights grounds before federal or city probes conclude.

Reserve Management Group, the plant’s owner, insists that its new facility passes sufficient air quality standards to operate in the neighborhood, according to their latest response brief.

The group told the Illinois district court that the plant’s removal is necessary to provide more “buffering of the operation from public ways and residential communities,” and that pollution mitigation measures are in place to keep emissions within official standards.

“It is not the symbol of inequality and racism that Plaintiffs’ narrative portrays,” the amicus brief said.

In a statement, RMG called the residents’ resistance “a false narrative peddled by vocal activists.”

“The project has been rigorously vetted over two years, including by the state’s environmental experts at the Illinois EPA and they determined that, even when combined with other operations, the facility will remain a minor source of emissions and satisfy air quality standards,” the statement continued.

Plaintiffs argued in a response filed Thursday that the Illinois EPA permits were not granted with rigorous consideration of how particulate matter from the proposed shredder would affect downwind residents.

In a victory for the neighborhood activists last month, the city’s Department of Public Health under Mayor Lori Lightfoot sent a letter to Reserve Management Group delaying the issuance of city permits, pending more information on cumulative impacts. The letter came after activists ended a month-long hunger strike over the plant.

The department doesn’t have a timeline on the new review, but said it will “take the time that is necessary” to analyze additional information before deciding on a draft permit, according to a statement from the city’s Joint Information Center.

The U.S. EPA’s External Civil Rights Compliance Office has paused its investigation to work directly with the Illinois EPA on an informal resolution process, according to a statement to Bloomberg Law from the federal agency.

“EPA has renewed our commitment to consider and address environmental justice challenges through consultation and engagement with overburdened communities,” the agency said in the statement.

Those commitments were articulated again this week, when Regan launched an initiative to beef up federal intervention and enforcement, by improving “early and more frequent engagement with pollution-burdened and underserved communities.”

Those steps are encouraging, but “fancy words” won’t be enough for sustainable change without better enforcement measures for industrial polluters, said Olga Bautista, a Southeast side resident and community planning manager at the Alliance for the Great Lakes.

Spotty enforcement of pollution violations is part of marginalized communities’ historical grievances on the federal level.

“We want to see actions that come out from those plans and those ideas, we want to see them being operationalized,” Bautista said.

Neighborhoods in the area are inundated with emissions from surrounding heavy factories--including sulfur, manganese, and petroleum coke. Since the area is already zoned as a manufacturing district, the state’s EPA grants permits fairly easily, and the city rarely fights them, Ramirez said.

American Zinc Recycling, a metal refinery across the river from the proposed Southside Recycling project, settled an investigation by the U.S. EPA last year over alleged violations of the Clean Air Act.

The company was required to improve emission mitigation measures and pay a $530,000 penalty. But Bautista said Biden needs to go further to disincentivize polluters.

“When a fine or SEP ... is just part of the cost of operating in this community, and it’s not punitive, we have a huge problem,” she said.

Federal standards need an overhaul to push cities and states to do better, according to Linda Rae Murray, public health expert and adjunct assistant professor at the University of Illinois Chicago. Current federal standards give corporations outsized rights to operate in overburdened areas without ample consideration of cumulative impacts, Murray said at a public health webinar on the General Iron permit.

“We have a regulatory process with the EPA that’s frankly broken,” she said.

While the city, state, federal government, and courts grapple with the plant’s future, Southside residents have made documenting and fighting pollution a full-time job.

Part of that job is working with researchers to fill gaps in health and pollution data at the neighborhood level. The Calumet Connect Databook, for example, reveals disproportionately high rates of heart and lung disease in medically undeserved areas surrounding the proposed Southside Recycling plant.

Bautista said she jokes with neighbors about how she never intended to make these fights her career. But there’s too much work to be done.

“We see so little action happening from the city that I feel like we’re going to have work for the rest of our lives,” she said.