President Joe Biden has promised to put the U.S. on a path to net-zero greenhouse gas emissions by 2050 that also turns around decades of environmental injustice, in which poorer and non-White communities have carried a heavier burden from pollution. Meeting both goals will go through Michael Regan, the new leader of the Environmental Protection Agency.

Before he even begins pursuing what he terms an “aggressive climate agenda,” Regan faces the daunting task of rebuilding an agency left in disarray by the previous administration. The EPA spent the past four years demoralized and belittled, with an exodus among rank-and-file staff. That means hiring hundreds of scientists just to fill vacancies.

In his last job as North Carolina’s top environmental regulator, Regan was known for navigating complicated issues by forging consensus—something that may be more difficult given the extreme polarization of today’s Washington. Should Biden’s multi-trillion-dollar American Jobs Plan make it through Congress, Regan will play a key role in implementing its climate provisions. Should the bill either die or be stripped of its climate provisions along the way, he’ll have to shoulder even more of the burden of Biden’s climate agenda.

Bloomberg Green talked to Regan about his vision for the EPA, his plans for reining in emissions, and how he aims to make environmental justice a guidepost for decision-making. The interview has been edited and condensed for clarity.

How aggressive should the U.S. be in formulating a new commitment under the Paris Agreement now that it’s rejoined? What considerations—jobs, the economic recovery—are being factored into that?

Listen, given the urgency of this climate crisis, the president is full steam ahead on not only the U.S. stepping up and playing a leadership role, but working to be sure that the international community understands that we’re all in this together. EPA has a critical role to play in delivering on President Biden’s aggressive climate agenda. It’s an all-hands-on-deck approach. 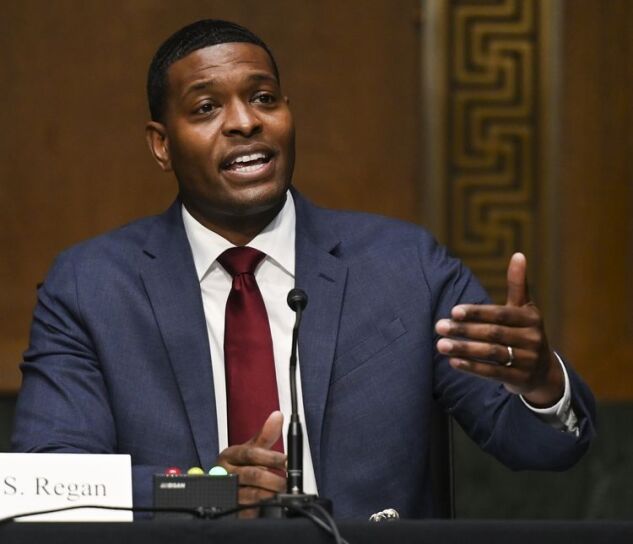 We’re focused on the car standards. The president has directed EPA to issue a new notice of proposed rule-making by the end of July, and we’re on track to meet that timeline. We’re laser-focused on methane regulations. We’re looking at the California waiver [allowing the state to set its own vehicle-emission standards], and I’ve made it clear that I’m a firm believer in the state’s statutory authority to lead. We are heavily engaged with the business community. We are heavily engaged with the labor community.

I believe that it’s a false option to choose between economic development and prosperity and environmental protection. We can walk and chew gum at the same time.

Let me ask you about those auto standards, which are so central to the new Paris commitment. How far are you willing to go to reduce tailpipe emissions?

We need to go as far as we can to meet the demands of the day. The science indicates that we have a short window to reverse the path we’re on. We’re taking a strong look at what the science is urging us to do. We’re marrying our regulatory policy and what we have the statutory authority to do with where the science directs us and where the markets and technology are. Again, it is an all-hands-on-deck approach. It’s not solely through the regulatory lens that we will get there. It’s through a whole-of-government approach.

You’re known for being a consensus-builder, but now you’re fashioning policy that’s guaranteed to anger environmentalists or industry—or both. What’s the sacred ground that’s beyond compromise?

Following the science and following the law are the critical rules of engagement here. I do firmly believe in consensus-building. I do believe that all voices should be heard. But at the end of the day, EPA’s mission is to protect our natural resources, protect public health, and I believe we can do both while stimulating the economy and creating good-paying jobs.

I’m going to do what I’ve always done, which is convene diverse constituents to talk about complex issues. But at the end of the day, the science, data, facts, and the law will drive the decisions that we make here at the agency.

Some 700 scientists quit the agency in the Trump years, saying they were silenced while industry voices were elevated. How are you going to convince people to come and work for you after that?

The secret sauce here is returning back to the agency’s original mission, which is protecting people and natural resources, creating a welcoming environment that’s focused and centered around scientific integrity, ethics and values. We believe people will come back to the agency in droves.

Should climate skeptics and industry scientists be included? Are there some points of view that shouldn’t have a seat at the table?

What I want to do is return back to normalcy, which was pre- the last four years, where the goal isn’t to silence anyone’s voice. It’s not about exclusion, it’s about inclusion.

What if someone is an outright climate skeptic? Should they be included?

We need individuals that believe in science, believe in the facts before us and are willing to roll up their sleeves and join the conversation about how this country can tackle climate change. Those are the types of individuals that we’re looking for.

Everyone is talking about environmental justice. And yet one can imagine that over time other priorities might intrude. How do you make sure that there are achievements you can measure? How do you track success over the next four years?

The president has set the tone. We now have the White House Environmental Justice Advisory Council. We have our National Environmental Justice Advisory Council here at EPA. So we have some of the broad policy viewpoints, we know what the mission is. Now we’re looking at, how do we build that into the performance of the daily work that we’re doing? That’s part of my charge to senior leadership here at EPA. As we evaluate these key opportunities in areas of enforcement, rule-making, permitting, contracting, and procurement, I would like for them to do a very thorough evaluation of where the shortcomings are, where the opportunities are, and develop those benchmarks that will determine and define success.

There’s renewed interest from industry and on Capitol Hill in a carbon tax. In exchange, perhaps, for reducing other regulations governing carbon dioxide that come from the EPA. Treasury Secretary Janet Yellen supports a carbon tax. Have you discussed this approach with her? Would a carbon tax work?

The jury’s out on whether it would work or not, but I believe that we have to as a nation have a very robust discussion about all of the options that are potentially conceivable. We all know that regulations alone will not solve the problem. My strategy is, no matter what Congress does, the EPA has statutory authority to move forward and make decisions based on science and the law to regulate greenhouse gas emissions. And we will do what we need to do under our statutory authority. The discussion of other tools does not prevent this agency from doing its job and serving its primary mission.

To contact the authors of this story:
in Washington at jdlouhy1@bloomberg.net