The stars of the European Union sit on the glass facade of the European Parliament's Altiero Spinelli building in Brussels.
Photographer: Geert Vanden Wijngaert/Bloomberg via Getty Images

The European Parliament usually takes an aggressive stance when it comes to European Union climate and environment policy, but European elections that start on May 23 could change that.

The Parliament—751 lawmakers from the EU’s 28 countries—has consistently pushed for the bloc to take on tougher targets in areas including greenhouse gas emissions reductions, renewable energy deployment, and energy savings.

It also has advocated for tighter controls for plastic trash, pesticides, and genetically modified crops. About 400 million EU citizens vote in Europe’s parliamentary elections, which are held every five years.

Such positions have generally been made possible by the Parliament’s largest political blocs—the center-right European People’s Party (EPP) group and the center-left Progressive Alliance of Socialists and Democrats—voting together on the main environment and climate issues.

In March, both blocs swung behind a call for the EU to become a carbon-neutral greenhouse gas emissions economy by 2050.

But projections ahead of the late-May vote show that those main blocs will lose ground, in particular to political parties that emphasize controls on immigration and other issues, campaign against rising energy costs, and want the return of some EU powers to national governments. 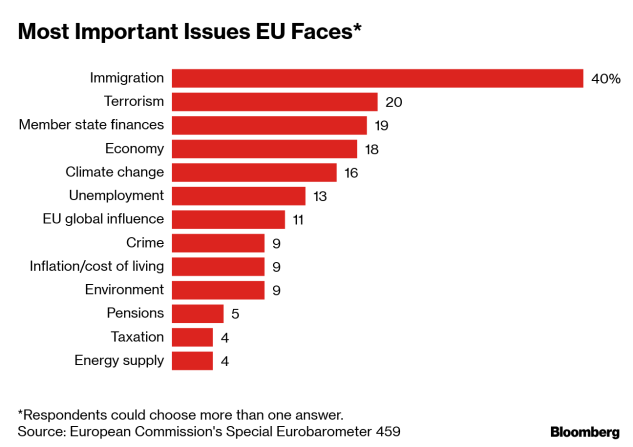 Such parties feed off public discontent with some environmental policies, as expressed through public demonstrations like the gilets jaunes, or yellow vest, movement in France, which began last October as a protest against a tax on diesel fuel.

“The Parliament is going to be more fragmented than ever before,” with a likely increase in the seats taken by far-right, nationalist, and Euro-skeptic lawmakers who are often opposed to taking action to tackle global warming, said Wendel Trio, director of campaign group the Climate Action Network Europe.

Candidates for the May 23-26 elections to the European Parliament range from the far left to far right. A mid-April projection published by the European Parliament of the allocation of seats after the elections shows the outcome could be a three-way split among broad blocs of socialist and green parties, centrist and center-right parties, and nationalist and further-to-the-right parties.

If that outcome materializes, then for climate and environment policy, “it really depends on how they organize,” said Manon Dufour, head of the Brussels office of think tank E3G.

In particular, she said, the Parliament’s future attitude to climate and environment issues could depend on the European People’s Party, within which the largest bloc of lawmakers comes from the Christian Democratic Union, the party of German Chancellor Angela Merkel.

A possible outcome could be “strong, organized populist groups and an EPP that lets itself be influenced by this,” Dufour said.

This could mean “it may be there will be more concern about the economic impact” of environment and climate policy, Bernd Lucke, leader of small German center-right party the Liberal Conservative Reformers, told Bloomberg Environment in a telephone interview.

Environment and climate policy should be “more business-friendly,” and “more protective of the economy,” Lucke said.

In a scenario of a dominant center-right and right bloc that emphasizes economic goals, the new European Parliament, for example, might not renew its calls for the EU’s 2030 emissions reduction target to be reopened, Dufour said.

The EU has agreed a binding target for 2030 of a 40 percent emissions reduction compared to 1990, as the bloc’s contribution to the Paris Agreement on global climate change, but environmental groups and green lawmakers have said the emissions cut should be steeper.

“The European Parliament has been the one European institutional voice” calling for a tougher target, but may no longer do so post-May 23, Dufour said.

EU environment and climate policy is a compromise negotiated between the European Parliament and the Council of the European Union, which represents the governments of EU countries. The council, in general, adopts less stringent positions than the Parliament.

Another prominent issue on which there could be pushback is the electrification of transport. In March, the European Parliament approved a law requiring automakers by 2030 to cut by more than a third the average per-kilometer carbon dioxide emissions of the new cars they sell and ensure that 35 percent of new sales are zero- or low-emissions models.

The law is seen as pushing the EU in the direction of electric vehicles as part of the battle to reduce emissions, but the new European Parliament could try to backtrack if a center-right and right bloc is dominant.

The impact of the measure in climate terms would be “a few thousandths of 1 degree Celsius,” but “would endanger some 600,000 to 700,000 jobs just in the production of car engines,” Lucke said.

“We should readjust the term populist. We have to think about the people who will vote for the so-called populists” and be “more realistic” about tackling climate change and “not impose more burdens on the people,” said Johannes Huegel, a researcher with the Konrad-Adenauer-Stiftung, a foundation closely associated with the European People’s Party.

The new European Parliament should take measures only “in accordance with the commitment of the people,” who were becoming discontented with measures such as rising fuel taxes and bans on older vehicles, Huegel said.

But there is an alternative scenario in which the center-right and center-left blocs in the parliament continue to work together, but because they are weaker they “look for a third and maybe a fourth partner, and the Greens and Liberals are the two they look at,” said CAN Europe’s Trio.

Currently, the Green group and the centrist Alliance of Liberals and Democrats for Europe are the Parliament’s fourth- and fifth-largest blocs. Both are expected to make modest gains in the election.

If this happens, “we can’t expect a more assertive European Parliament,” but things should continue more or less as now in terms of environment and climate policy, Dufour said.

Green gains, especially in countries including Belgium, Germany, and the Netherlands, “should mean more progressives in the new Parliament and a strengthened potential kingmaker role,” said Patrick ten Brink, policy director of the European Environmental Bureau.

And protest movements like the yellow vests aren’t the only public expressions of discontent lawmakers must pay attention to.

Climate change and the environment have been steadily rising in importance among voters for a year, according to the European Parliament’s public opinion unit.

“Without people like Greta we would definitely be speaking a lot less about climate than we do today,” said Thomas Pellerin-Carlin, head of the think tank Jacques Delors Energy Center in Paris. “More than their votes as individuals, young people are putting climate change on the political agenda and impacting the votes of their family members.”

Antonio Navarra, president of the Euro-Mediterranean Center on Climate Change in Lecce, Italy, said voters are starting to realize that climate change is a “multiplier” that increases the severity of other problems such as migration.

But being aware of the problem doesn’t mean voters will necessarily take concrete steps to solve it, he said.

“We have to find solutions that make the right behavior convenient, either economically or from a lifestyle point of view,” Navarra said. “Preaching doesn’t work.”

—With assistance from Janna Brancolini in Milan, Italy.

To contact the reporters: Stephen Gardner in Brussels at correspondents@bloomberglaw.com