The Energy Department’s delay in deciding whether to issue new efficiency standards for refrigerators and other home appliances has led to uncertainty for some manufacturers, industry representatives told Bloomberg Environment.

Since March 2016, the department missed eight statutory deadlines for assessing whether new home appliance energy efficiency standards are needed. The agency has moved 20 efficiency standards to a long-term status, meaning it probably won’t act on them this year either.

Appliance manufacturers say they are frustrated because they don’t know how to design products to meet standards that have not yet been completed. Energy efficiency advocates say consumers and businesses potentially could save billions of dollars if the standards are updated.

Planning Thrown ‘Out of Whack’

By law, the Energy Department must set national minimum energy efficiency standards for more than 60 home and commercial appliances ranging from dishwashers to pool heaters. The standards for most products must be assessed every six years to determine if their benefits of energy savings outweigh the costs to manufacturers. The agency has to assess the standards every six years for most products and issue a final rule within two years after proposal if a revision is warranted.

“We literally rely on predictability. It is how our companies plan for the future,” said Francis Dietz, vice president of public affairs of the Air-Conditioning, Heating and Refrigeration Institute, which represents more than 300 manufacturers, including GE Appliances and Johnson Controls Inc.

When the DOE says it will issue a rule in the coming year and “all of a sudden it says it’s put off indefinitely, then that really throws the planning curve out of whack,” Dietz told Bloomberg Environment.

Charlie Souhrada, vice president of regulatory and technical affairs for the North American Association of Food Equipment Manufacturers, said the delays are “a big challenge because if you’ve got a manufacturer that makes commercial reach-in refrigerators, they need to know how to engineer a design for those standards.” His trade group represents more than 550 commercial food equipment and supply manufacturers, including KitchenAid and Lenox Corp. 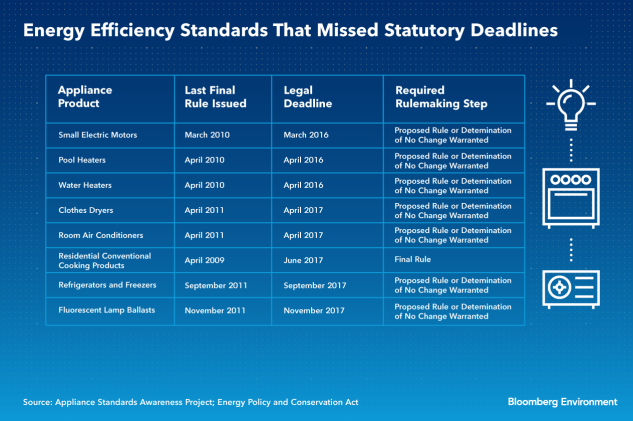 “There are potential savings for updating existing standards of up to $43 billion annually for consumers and businesses by 2035, so there are a lot of savings at stake,” Andrew deLaski, executive director of the Appliance Standards Awareness Project, which advocates for appliance efficiency standards, told Bloomberg Environment.

Shaylyn Hynes, the Energy Department spokeswoman, responded to a Bloomberg Environment query about why the agency was not meeting the deadlines by saying in an email, “The department is committed to meeting our legal obligations.”

Three of the deadlines were missed during the Obama administration and five have been missed so far during the Trump administration, dealing with products ranging from cooking appliances to refrigerators, deLaski said. For seven of the products, the department was supposed to either issue a proposed rule increasing the minimum efficiency level for the products or issue a determination that no change is warranted, and in one case, it was supposed to issue a final rule.

Charles Hon, manager of sustainability and government affairs at True Manufacturing Co. Inc., which manufactures U.S.-made commercial refrigerators and other products, said the longer the agency delays the start of a six-year review cycle on the efficiency standard affecting his company’s product, the more rushed the process is for industry in the end. The standard for commercial refrigerator equipment should have started in April 2017, he said.

“The tighter the schedule, the more mistake potential you have,” Hon said.

This isn’t the first time the Energy Department has gotten behind on issuing efficiency standards.

Under the George W. Bush administration, the department was behind—up to 13 years in one case—on 22 of them. This led to an lawsuit filed by the Natural Resources Defense Council, two organizations representing low-income consumers, New York City, and 15 states in 2005. It was settled in 2007 with a consent decree providing the agency five years to issue the standards, 21 of which were addressed during the Obama administration.

Four of those Obama-era standards still haven’t been published by the Trump administration, which gives a date for when the rule goes into effect. Environmental groups, including the Sierra Club have sued over those delays. The Sierra Club has received funding from Bloomberg Philanthropies, the charitable organization founded by Michael Bloomberg, the ultimate owner of Bloomberg Environment.

Movement of Rules to ‘Long-Term’ Status

There has been bipartisan support for energy efficiency standards since they first were enacted in 1975 and 1987 under Republican Presidents Gerald Ford and Ronald Reagan. The laws have since been updated under Republican administrations in 1992, 2005, and 2007 to apply the program to more products.

So far, the Trump administration has taken little action on efficiency standards. The administration is soliciting suggestions for changing the program to reduce costs for manufacturers. Comments are due in late February.

The Energy Department under the Trump administration moved 20 energy efficiency standards and 17 test procedures in its Unified Regulatory Agenda issued in December from its “active actions” list to its “long-term” actions list, which are those the agency doesn’t expect to act on in the next year. Four of the eight that missed statutory deadlines are in the active list, and four are on the long-term list.

“Failing to update these standards creates needless uncertainty for businesses and will result in lost savings for consumers. The DOE needs to do its job and follow the requirements of law,” Rep. Peter Welch (D-Vt.), a member of the House Energy and Commerce Committee, told Bloomberg Environment in an email.

Welch asked Mark Menezes, DOE’s undersecretary of energy, about the delays during a January House hearing. Menezes said he would provide “full-throated support” to meeting the statutory deadlines.

“I’ll keep pushing this administration to issue energy efficiency rules, so we can continue to support American innovation, combat climate change and cut energy bills for working families and businesses,” she told Bloomberg Environment in an email.

To contact the reporter on this story: Rebecca Kern in Washington at rkern@bloombergenvironment.com