An unlikely energy sector is emerging as a winner from the West’s megadrought: fossil fuels, whose heavy use has been blamed for creating the conditions causing the drought in the first place.

Fossil fuels are considered a key driver of global climate change and a leading cause of the hot and dry conditions sapping water levels at Bureau of Reclamation reservoirs through the agency’s 11-state Western region.

“Hydropower is generally used as a backup for intermittent resources when the wind doesn’t blow or the sun doesn’t shine,” said Leslie James, executive director of the Colorado River Energy Distributors Association, an organization of utility systems and agencies serving more than 4 million consumers in six Western states. “But as hydropower reliability declines, what are you going to back those up with? Probably gas.”

“It’s ironic, isn’t it?” James said of the move to fossil fuels.

The Energy Information Administration forecasts that hydropower electricity generation in the U.S. will be 14% lower in 2021 than in 2020, saying the extreme and exceptional drought has has lowered reservoir levels in the West — especially California and the Pacific Northwest, home to most of the nation’s hydropower capacity.

The West’s two largest reservoirs, Lake Mead and Lake Powell, are at their lowest since filling, and are nearing minimum levels for their turbines to produce power.

Powell sits about 58 feet above the minimum power pool level of 3,490 feet, and every foot of lake decline means about 3 megawatts of lost generating capacity at the lake’s 1.3 gigawatt Glen Canyon Dam.

The bureau estimates a 3% chance Powell will dip below power pool in 2022, forcing its turbines to shut down. The likelihood rises to 29% in 2023.

“For years, hydropower was a steady and reliable source of emission-free, predictable power, but because of the drought, it’s no longer the reliable source it once was,” said Ashley Wald, partner in the Denver office of Holland & Hart.

The drought has threatened states’ ability to meet standards for renewable-energy usage as well as greenhouse gas emissions reductions targets in states that have them. Twenty-nine states have a so-called “renewable portfolio standard,” or RPS, requiring increased production from wind, solar, hydroelectric, and other renewable sources.

Holland & Hart serves as lead counsel for the Southern California Public Power Authority on behalf of its members, including the Los Angeles Department of Water and Power, whose portfolio of energy resources includes a significant wind and solar power, along with other clean energy sources in its portfolio.

“The short-term fix is to rely on some unclean sources to meet power needs,” Wald said. “And you’re lining up to buy that power with everyone else in the world. You’re competing with everyone else who has been trying to meet an RPS.”

In the region, long-term fixes will come from development of more solar and wind power, coupled with battery storage, she said.

“But the short-term fix is different than the long-term fix,” she said. “In the short term, it’s a free-for-all.” 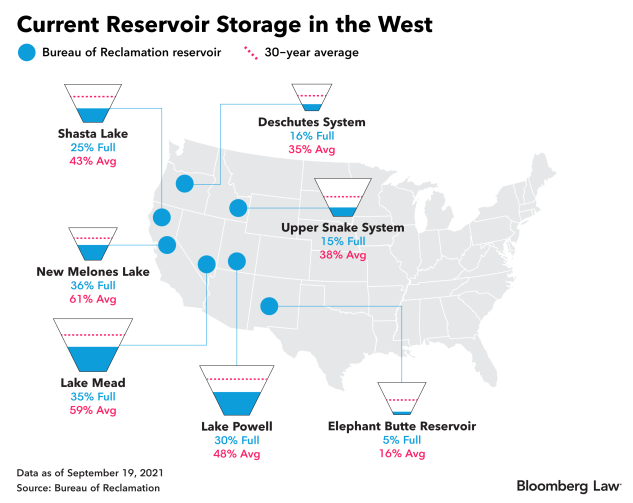 The federal agency that is the primary marketer of wholesale electricity from water projects in the West is proposing a 12% to 14% increase in rates for its customers in six states served by Colorado River Storage Project reservoirs to help offset reductions in hydropower generating capacity.

The Western Area Power Administration (WAPA) owns 17,000 circuit miles of transmission carrying electricity from 57 hydropower plants to wholesale buyers—many of which then re-sell the electricity to individual consumers at the retail level—in a 15-state region stretching from Minnesota to California.

In recent years, because of declining hydropower production, WAPA has had to buy additional power to meet its contractual obligations to supply firm power to its preference customers in the six states — Arizona, Colorado, Nevada, New Mexico, Utah, and Wyoming — affected by the rate increase. The increase would take effect Dec. 1.

Last year, WAPA paid $25 per megawatt for replacement power — energy from other sources to make up the shortfall from hydropower. But this year it’s paying $33—a 35% increase.

The situation “puts pressure on consumer rates,” but it’s too early to tell how much more individual consumers will pay at the retail level, she said.

To avoid “rate shock"—a sudden sharp spike in rates—the agency decided not to pass the full cost of the increase onto its wholesale customers, she said.

But that leaves customers with a bitter choice: “They can purchase more from us, or go out and buy it on the open market—wind, solar, gas, coal or nuclear, whatever they can find,” she said.

If Upper Colorado customers “are no better at procuring replacement power than WAPA, the customers should expect to see an all-in increase (including replacement power purchases) greater than 40% with the implementation of the new rates and allocation changes,” said the Utah Rural Electric Cooperative Association, in written comments submitted to WAPA at the end of August.

“This increase creates rate shock for small customers and provides very little time for cooperatives to design and implement retail rate adjustments which account for these changes,” the association said.

Not all hydropower qualifies as renewable. And while they’ll have to deal with higher rates for wholesale power, some electric cooperatives in the West, such as Tri-State Generation and Transmission Association, Inc. in Denver, say they’ll still be able to meet renewable portfolio standard targets even if they can’t replace missing hydropower capacity with other renewables.

But if the drought persists as expected, more hard choices will be coming for buyers of hydropower from Western reservoirs along with the municipal, agricultural, industrial and recreational water users that depend on their supplies.

Some interests will have to yield to others, Wald said.

“This summer, the severity of the drought was a real wake-up call,” she said. “It’s the reality. And if it’s a choice between having a power source, drinking water, or a pretty lawn, it’s a pretty obvious choice.”