At least a third of the scientists and staff at EPA’s specialized forensics lab have quit or retired over the past five years, an exodus that threatens the unit’s central role in solving some of the nation’s most difficult environmental crimes.

The brain drain at the Environmental Protection Agency’s National Enforcement Investigations Center spans the Trump and Biden administrations, and corresponds with a severely truncated time limit to complete scientific investigations and what more than 15 current and former employees described to Bloomberg Law as a hostile workplace.

As a result, the EPA isn’t getting the evidence it needs to button up big, comprehensive settlements and enforcement orders at a time when the Biden administration is publicly emphasizing scientific integrity and environmental justice, the employees said.

“In the past, people had to die before they left,” said Ken Garing, a 30-year NEIC veteran who retired in 2017. “People used to love going to work there. Now it’s like, ‘When the heck am I gonna get out?’”

The EPA broadly denied the claims, many of which mirror a May report from the agency’s inspector general that documented NEIC workers alleging a “culture of fear” characterized by reprimands from senior management, low staff morale, and fear of retribution.

The agency is working to implement some of the recommendations, said spokesman Timothy Carroll. But it also disagreed with parts of the report, saying the watchdog hadn’t identified any cases of retaliation from management, and claiming a “continuing misunderstanding” by some staffers about the difference between reprisals and “reasonable management expectations of accountability.”

Most of those interviewed by Bloomberg Law requested anonymity to speak about their experiences. Some former employees even said they feared retaliation against colleagues with whom they associated, or against themselves if they were to seek work elsewhere in the government.

“It’s like working with a piano over your head on a string,” said a staffer who recently took early retirement.

One former employee said the office is losing expertise in the field of PFAS detection—among the Biden EPA’s highest priorities—which “they’re going to regret.”

NEIC is composed of a field branch, a lab branch, and an infrastructure and project support branch. It’s based in a suburb of Denver, far from the EPA’s headquarters in Washington, D.C. And even when fully staffed, it numbers fewer than 100 workers.

But its scientific analyses have been used to shore up some of the EPA’s most complex criminal and civil cases. Its technicians use advanced methods and equipment, sometimes developed within the lab itself, to do specialized water, air, and soil studies.

It was NEIC’s forensic work that found traces of benzene in the Buffalo, N.Y., area, leading to a $24 million court order against Tonawanda Coke Corp. in 2014.

NEIC investigators spent time getting a more thorough understanding of the Tonawanda facility’s entire process than the EPA’s regional inspectors would, according to a former lab employee. They eventually found atypical air and water samples, then improvised analytical techniques to “get results that would stand up in court,” a former employee said.

The office’s scientists also played a critical role in a $20 million fine for benzene emissions against Koch Petroleum Group in 2001, and found evidence of methyl bromide in the U.S. Virgin Islands that led to a $10 million plea agreement against Terminix in 2016.

“NEIC is critical to the mission of the environmental enforcement section in providing that forensic science that you need to successfully prosecute a civil or criminal matter,” said Tom Lorenzen, a former environmental prosecutor at the Justice Department and now a partner at Crowell & Moring LLP. “We ought to be grateful for the fact that those folks are there.”

The NEIC has distinguished itself as a world-class operation that does work no other part of the EPA can do, according to many employees.

But the forensics lab has lost 32% of its full-time equivalent staff from 2014 levels, and “has been unable to backfill vacant positions since 2016,” according to the EPA’s fiscal 2021 financial report.

One former employee said the losses have been even greater, and that from 2016 to 2020, 54% of the staff quit or retired. More than six in 10 left because they had problems with management, said the employee, who personally interviewed all those who left.

The inspector general’s report found that 58% of the staffers interviewed said they planned to leave NEIC “as soon as possible,” regardless of their retirement eligibility.

Several employees said they have suffered various forms of mental and physical stress, including depression and insomnia. Driving some of the stress is a requirement in place since 2018 that staffers must wrap up their investigations within 60 days—less than one-quarter of the historical average to complete an investigation, when some probes took years.

An investigation typically requires several rounds of interviews with personnel at a facility under investigation, according to many staffers. New findings frequently crop up as the lab is analyzing samples, sometimes requiring the investigators to reach back out to the facility to do more interviews. But that level of back-and-forth isn’t possible in just 60 days, staffers said.

The time limit “bumped up the number of investigations we do, but very little of them have any teeth anymore,” said one former employee. “They don’t really have major findings anymore, like they used to.”

The tighter timeline leaves the EPA in jeopardy of missing out on evidence needed to button up some comprehensive settlements and enforcement orders, said the employee. Evidence the Justice Department is now getting from NEIC and taking to court “is peanuts,” she said. “It’s small potatoes.”

“You’d have to have been born yesterday to think you can get a quality report out in 60 days,” said a former employee. “Whoever came up with that nutty notion watches too much ‘CSI,’ because it’s just not doable.”

‘As Much Time as Needed’

NEIC staff “are provided as much time as needed to conduct thorough, careful investigations,” said an EPA spokesman, adding that the 60-day goal “was established to document findings and was put in place in order to respond to environmental harm in communities in a more timely fashion.”

The lab used to take an average of 284 days to complete reports, during which time “a company is permitted to continue committing violations to the environment,” the spokesman said.

One current NEIC inspector said the office used to take so long to produce reports that at least one region had stopped calling on it for help.

“Two years is absolutely shameful,” she said, “which is why the EPA moved to a 60-day timeline.” 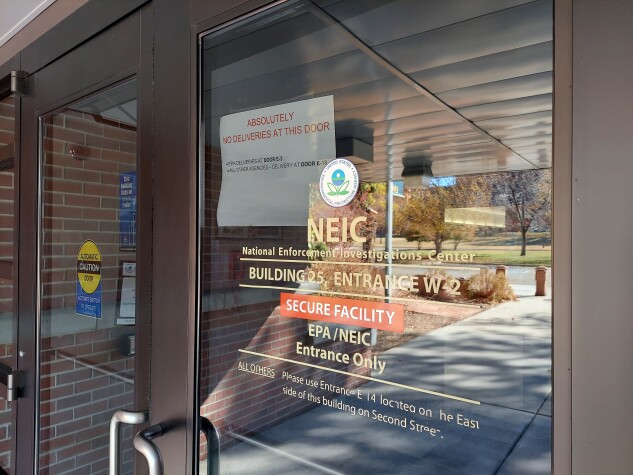 An entrance to an NEIC building at the Denver Federal Center in Lakewood, Colo.
Photographer: Tripp Baltz/Bloomberg Law

Both she and the EPA spokesman further said the 60-day guidance is not a hard and fast deadline, and that management “has always been flexible” about granting extensions.

“No one has ever directed or asked me to cut corners or speed it up so we meet that 60-day deadline,” the NEIC inspector said.

But several staffers said they’re broadly expected to meet the 60-day timeline. The former employee who gathered the data about staffing levels said workers feel they’re going to be “nailed or disciplined if you miss more than a couple deadlines.”

“The feeling is, ‘I’m not even going to look at new information that comes up once the 60 days starts ticking, because I know it’s going to take a long time to get to the bottom of it, and I’m not risking my butt for that,’” the employee said.

Francesca Grifo, the EPA’s scientific integrity officer, said she too is concerned about rushed science throughout the agency.

Under President Donald Trump, the agency implemented a program known as the EPA Lean Management System (ELMS), which measures teams’ progress toward goals and includes weekly group meetings to talk about problems and possible solutions. The program remains in place, even though many employees have said it doesn’t help the agency achieve its goal of protecting the environment.

“There was a lot of concern from many parts of the agency about ELMS, in the sense of, should we be evaluating our work and doing it better?” Grifo said. “Of course we should.”

Much of NEIC’s most important work is highly specialized and can’t be done without years of expertise developed on the job in fields like chromatography and molecular spectroscopy, according to veterans of the office.

For example, NEIC investigators use a unique tool known as Geospatial Mapping of Air Pollutants that can very quickly determine the precise sources of contaminants. But even new staffers who know how the instrument works “don’t have the deep experience of where to look in facilities when they drive this monitoring device around,” said Garing.

EPA’s Carroll said staff “have been encouraged to innovate and develop approaches to difficult analytical problems.”

The EPA hired 24 new NEIC employees from 2016 to 2020, according to the staffer who gathered the personnel data.

NEIC has been conducting “extensive recruitment efforts” to fill other open positions, Carroll said, adding that the agency is in the process of hiring 36 more expert staffers.

He also said the EPA “takes all allegations of mismanagement seriously,” and that the agency is “actively working to strengthen and support its talented and dedicated career staff” in the wake of the coronavirus pandemic.

‘A Tent Down On The Beach’

One current NEIC inspector said many of the staff who left were already of retirement age, and that she had “never heard of, or spoken to, anybody that is quitting because they’re unhappy.”

Grifo also encouraged NEIC staffers to file a formal complaint. Several former employees said they were reluctant to do so, again for fear of retaliation.

Most of the employees who spoke to Bloomberg Law corroborated the inspector general’s findings that reported staffers alleging a “an us-versus-them mentality,” a “culture of fear,” and the concern that “saying anything that may be construed as negative about management could result in reprisal.”

A recent Federal Employment Viewpoint Survey also painted a grim picture of staff morale. In the 2020 survey, 37.3% of NEIC staff said they did not recommend their office as a good place to work, three times the rate of the EPA overall. Another 21.9% said their supervisor doesn’t treat them with respect, almost five times the EPA average.

“The people there are some of the finest scientists I’ve ever met, and some of the smartest I’ve ever met,” said one former employee. “To call them ‘geniuses’ is not underselling them. And they’ve lost a number of them.”

NEIC is headed by Director Erica Canzler, a nonpolitical appointee and 17-year EPA veteran who became acting director in mid-2016 and has run the office as director since January 2017.

The EPA didn’t make Canzler available for comment, despite repeated requests. But the NEIC inspector who defended the 60-day deadline said she has “never experienced the behavior that people are describing.”

Garing ultimately defended the quality of the work still being done, even with fewer experts and tighter deadlines.

“Instead of building a sound masonry home, which is what we used to do, now we have to build a tent down on the beach,” Garing said. “It’s going to be a great tent, but it’s not going to be a full-fledged home. Which of these will weather the storm of intense legal scrutiny?”