The start-and-stop approach the EPA wants to use for toxic site cleanup could be quicker, cheaper, and more effective than the process the agency has used for decades, but some are concerned it could increase uncertainty for the companies involved.

Steven Cook, head of the Environmental Protection Agency’s Superfund task force, told Bloomberg Environment June 28 he is focusing on creating sustainable reforms to the agency’s contaminated site cleanup program. To do that, the agency wants to expand to all 1,300 of the nation’s most contaminated sites the use of adaptive management, an approach that has been used in many other cleanups.

“The adaptive management concept has got real potential,” Cook told Bloomberg Environment. The approach allows the agency to be more flexible in its cleanup decisions and adapt to the contaminants found at a site, he said. 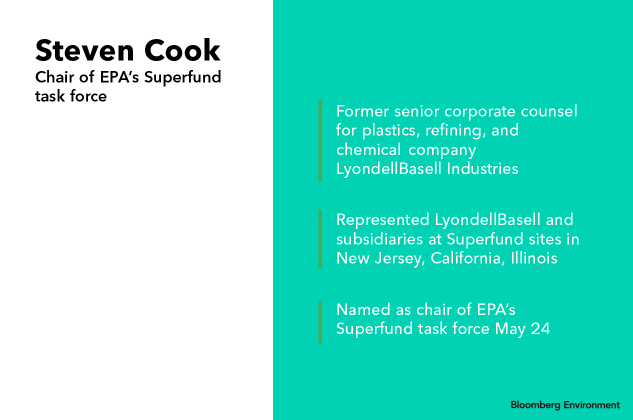 Under the approach, the EPA or a company would assess the immediate, apparent risks at a site, get them cleaned up, then stop and re-assess if more work is needed. This differs from EPA’s conventional approach to Superfund sites, which typically requires a full site assessment before taking any action.

“The result would be more sharply focused on what you want to achieve, and perhaps, more cost effective,” Jonathan Z. Cannon, professor at the University of Virginia’s School of Law and former acting administrator for the EPA’s Superfund and land office, told Bloomberg Environment.

The adaptive approach can be helpful at complicated sites where the EPA and involved companies disagree about what needs to be done, John Gullace, partner at Manko, Gold, Katcher & Fox LLP in Bala Cynwyd, Pa., told Bloomberg Environment. Gullace has represented companies involved with Superfund sites.

The EPA has already started using the adaptive management approach at Berry’s Creek, part of the Ventron/Velsicol Superfund site in Bergen County, N.J. At Berry’s Creek, industrial and sewage discharges as well as urban runoff have contaminated sediment and water and entered the food chain. The area is contaminated with enough mercury, chromium, and other substances that the fish and crabs are unsafe to eat.

The EPA proposed an interim plan to address some of the contamination while it develops a cleanup plan for the entire site. Agency staff are now reviewing public comments on the proposal.

The agency is planning to implement adaptive management principles at pilot sites by the end of the year, Molly Block, spokeswoman for the EPA, told Bloomberg Environment in an email.

At the same time, the adaptive management approach could create uncertainty for the parties involved because the entire site isn’t necessarily assessed, leaving the potential for hidden contaminants, and because remedies may be more experimental, Cannon, who also was the EPA’s general counsel during the Clinton administration, said.

Cook said while there may be some uncertainty, it can be outweighed by the benefits.

“Sometimes you find unexpected things, and they add costs. But other times you learn a better way to do it, and achieve the same environmental result that you’re looking for: protectiveness,” Cook said.

Cannon, the agency, and some companies involved in Superfund sites believe the benefits of the approach exceed the costs of uncertainty.

“There isn’t unanimity in that view,” Gullace said. Some potentially responsible parties, or PRPs, are concerned that the adaptive management approach could prolong the cleanup process.

“As a PRP, you bear some risk that after you’ve spent years and millions of dollars, you have to go back and do some more,” he said.

Adaptive management is a theme across several of the recommendations. As part of that plan, the agency’s regional offices are encouraged to take early cleanup actions at sites with immediate risks or the potential for a contaminant to spread.

The EPA’s National Priorities List contains the most contaminated properties in the country, also known as Superfund sites. They include the Gowanus Canal in New York, Portland Harbor in Oregon, and Tar Creek in Oklahoma.

Properties with the EPA’s Superfund designation are eligible to receive federal funds for cleanup, although the agency aims to compel companies responsible for the sites, or third parties, to pay those cleanup bills.