What was meant to be a year that blew the wind energy industry well past its previous record for installations will more likely clear that mark by a more modest advance.

Developers are set to boost capacity by 9% this year to 66,422 megawatts, according BloombergNEF. That’s scaled back from the 24% expansion the London-based research arm of Bloomberg LP had anticipated.

The figures are the of downward revisions for growth in renewable energy as the spread of the coronavirus disrupts supply chains and investment plans worldwide. While the numbers also show the resilience of the wind industry, whose revenue is fixed to power-purchase contracts that don’t fluctuate like the price of fossil fuels, no business can go on as usual if workers can’t safely do their jobs. 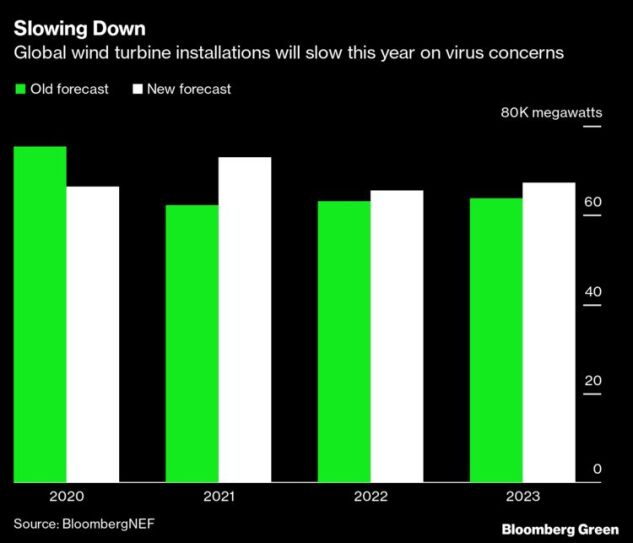 The health scare settling into Europe and the U.S. could be particularly bad news for the wind industry. While solar panels can be cheaply made in China and shipped, giant wind turbines are often manufactured in regions closer to where they’re installed.

“A lot of the issues are about people, not raw materials,” said , a wind analyst at BNEF.

In Europe, where BNEF cut its 2020 forecast by 4.2 gigawatts, there have already been 12 facilities feeding components and machines to the industry where production stopped because of the virus. In some cases, staff have refused to work because of fears for their safety. Other times, a plant has shut as a precaution or because an employee got sick.

It hasn’t been all bad news. Offshore wind, which was set to have a relatively slow year, will be largely untouched by the virus, compared to onshore installations. The world’s biggest developer of offshore wind farms, Denmark’s Orsted A/S, said last week that it would maintain guidance and is weighing $13 billion of investments in Taiwan.

Still, there are for offshore wind as well. Some developers in the U.K. are weighing whether to in their contracts to sell power at government-guaranteed prices. That could push project completions back, potentially affecting government targets to scale up renewable energy.

Existing owners of renewable power assets like Orsted may be relatively unscathed in this crisis compared to fossil fuel investors that have seen the price of oil and natural gas plummet. Many green power sites have fixed prices, either from governments or through long-term agreements with corporate buyers.

And in the longer term, wind should recover. Overall, BNEF’s forecast for installations from 2020 through 2023 have actually increased compared to their 2020 report at the end of last year. Much of the drop this year is set to be made up with an extra-busy 2021.

Still, the sting of coronavirus could pick up, regardless of a wind farm’s revenue model. If the outbreak continues into the summer, it could limit the ability of workers to service machines.

Summer is usually the least windy season, so operators prefer to do work then so that they lose out on the least amount of revenue while the machines are turned off. If that service is delayed to a windier time of the year, it could be more expensive.

To contact the editors responsible for this story:
at landberg@bloomberg.net