The Covid-19 pandemic has led emergency preparedness workers to make some changes in how they deal with disasters—like a series of violent storms that killed dozens of people in the South over the past two weeks.

Nineteen tornadoes have hit the state of Mississippi since Easter Sunday, Greg Michel, executive director of the Mississippi Emergency Management Agency, said at a briefing on Friday evening. Michel said the state was opening assistance centers in three counties for people who lost phone and internet access.

“Given the Covid pandemic, the engagement with the Red Cross and FEMA is different than we normally would have,” he said. “The face-to-face interaction is not there, so these assistance centers have been put into place to assist with that and help individuals fill out their claims.” 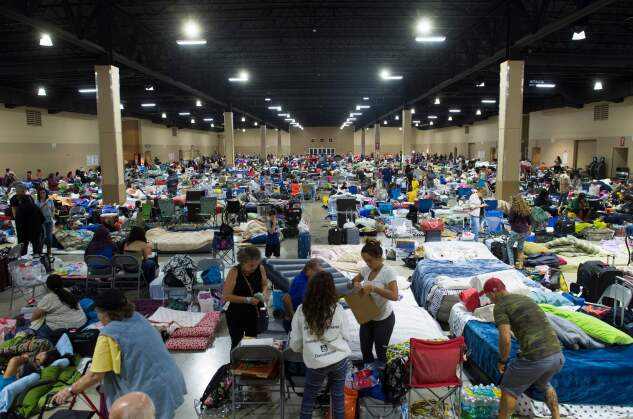 Hundreds of people gather in an emergency shelter at the Miami-Dade County Fair Expo Center in Miami, Florida, ahead of Hurricane Irma in September 2017. Because of the coronavirus pandemic, emergency managers will place cots farther apart, take evacuees’ temperatures, and deliver meals individually instead of having buffet lines.
SAUL LOEB/AFP via Getty Images

As if the tornadoes, hurricanes, floods, and wildfires that sweep the country every year aren’t enough to handle, now emergency management officials must factor in the coronavirus. Getting to safety is paramount, but experts worry some people might consider going to an emergency shelter so risky that they choose to ride out hurricanes, for example, in unsafe structures only to need rescue later.

Weather-related disasters often hit back to back, such as multiple hurricanes or tornadoes following spring river flooding. But a pandemic during the spring tornado season,
just as record-high ocean temperatures threaten to spawn an above-average hurricane season, is new for U.S. emergency management officials.

“This situation in particular has been very difficult to navigate because it’s the first time we’ve ever been hit with this type of emergency,” said Mike Steele, spokesman for the Louisiana Governor’s Office of Homeland Security and Emergency Preparedness.

People can be slow to accept a looming weather threat in a normal year, but this year they could need to prepare after weeks or months of having essential items delivered because of the pandemic.

“We’ve been telling people to shelter in place, stay at home, no unnecessary travel. And then we’re going to tell them to evacuate,” said Craig Fugate, who has led both Florida’s and the federal government’s emergency management agencies.

The usual number of frail seniors, people with disabilities, children or pet owners who need a public shelter won’t change because of the coronavirus, Fugate said. But they could be joined by people who spent weeks or months out of work and have no place else to go.

“A lot of people that historically have had the resources to self-evacuate may not have that because of the tremendous unemployment,” Fugate said.

Officials encourage people under evacuation orders to seek safety with friends or relatives first, then to consider hotels. Public shelters should be a last resort.

But now that Americans have absorbed months of reports about the health dangers their neighbors pose by coughing or touching hard surfaces with unclean hands, they could perceive a greater danger in shelters filled with hundred of strangers in close quarters than from a natural disaster.

“Certainly in a shelter in most cases we’re not able to maintain groups of 10 or less, so we just have to maximize the social distancing, the hygiene, and the mask discipline,” Michel said. “If someone needs access to a shelter, we’re certainly not going to deny them access because we’ve reached a group of 10.”

To ease disaster survivors’ minds and to reduce health risks, people arriving at shelters managed by the American Red Cross will be screened for fevers and questioned about their travel and exposure to people with Covid-19, said Trevor Riggen, senior vice president of Disaster Cycle Services. Anyone with symptoms will be isolated, or moved to separate facilities when available.

Cots will be spaced farther apart, there will be frequent building cleanings and body temperature checks, and meals will be individually distributed. Masks, disinfectant, and thermometers have been added to standard supplies. Long-term communications about recovery assistance has shifted online.

These protocols will extend through the end of the six-month Atlantic hurricane season in late November, if not longer, according to Riggen.

“We don’t want people to be afraid to go to a shelter,” he said.

In California, spring rains did little to dampen the prospect of a drought that raises the risk of a severe wildfire season. People fleeing from wildfires have limited escape routes through narrow canyons and multiple alerts from various agencies.

“The standard FEMA model when you have a disaster, you open up the high school gym and put everybody in there and make sure they’re well fed and cared for, doesn’t work in this pandemic,” Liccardo said recently.

Florida is evaluating alternatives to mass shelters for hurricane season, such as potentially advising more people to stay home instead of evacuating depending on when their homes were built, Jared Moskowitz, director of the state’s emergency management division, said during a recent conference call for the Re-Open Florida Task Force.

Planning for the upcoming hurricane season remain ongoing at both FEMA and the Florida Division of Emergency Management, both agencies said in emailed statements.

People facing a disaster might wait longer to heed evacuation orders this year if they’re working and trying to make up for financial losses because of businesses being shut down this spring, said Brian Wolshon, director of the Gulf Coast Center for Evacuation and Transportation Resilience at Louisiana State University.

Or, if people are still unemployed as a hurricane threatens, they might hit the road before evacuation orders are announced, Wolshon said.

“It could be suggested that if you’re spreading out the same amount of traffic over a longer period of time, maybe the evacuation might go better? We just don’t know yet,” Wolshon said.


Shaun Courtney in Washington and Joyce E. Cutler in San Francisco also contributed to this story.