The novel coronavirus pandemic is testing the residential-solar sector, which had forecast strong growth this year but hasn’t faced a recession since it reached the American mainstream. Its key challenges are similar to those facing many other industries: how to close sales, complete installations, and convince homeowners to add solar panels during a period of unexpected and mounting economic uncertainty. But for some residential-solar companies, the biggest test may be how to reorient their marketing programs—which, new-fangled though the industry may be, still relies on old-fashioned door-to-door sales.

“Until people feel safe again, door-to-door sales will be hit,” says Tara Narayanan, a solar analyst at BloombergNEF. “Installations will slow as well. I’m skeptical homeowners will have construction crews over during a time of social distancing.”

As recently as 2017, rooftop installer Vivint Solar Inc. said door-to-door accounted for almost . Tesla Inc., which former rooftop king SolarCity Corp. in 2016, has recently for most of its solar products, which has contributed to the in its market-share. 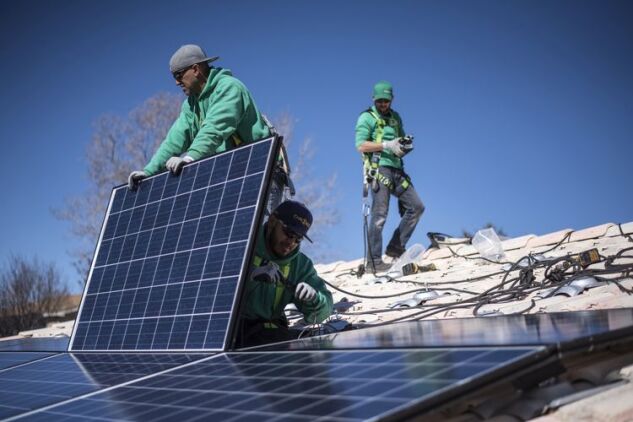 Door-to-door and online sales aren’t the lone sources of residential-solar marketing. Radio advertisements are common in some markets. Some installers sell their products at big-box stores and have partnered with other industries, including , to market their products.

Some dealers who work with Sunnova Energy International Inc., one of America’s biggest residential-solar companies, have begun shifting to online and phone sales, according to Sunnova Chief Executive Officer John Berger. “You don’t have to get up in somebody’s grill in their homes,” he says. “You can say, ‘Hey, I’ll stay outside your door.’”

While both Sunnova and Vivint have said in recent weeks that they haven’t seen meaningful impacts to their businesses due to Covid-19, there are indications that the industry as a whole may be slowing down. Just weeks ago, some installers were experiencing labor shortages. Now, companies are beginning to lay off workers due to declining sales. “There’s definitely going to be a hiccup,” says Michael Weinstein, an analyst at Credit Suisse Group AG. At the same time, a shift to web sales “likely benefits larger national level installers with a stronger online offering and ability to quickly retrain employees,” he said in a research note Friday.

The Solar Energy Industries Association, a leading trade group, has surveyed more than 270 companies and found that 21% had shrunk their workforces. Cancellations have also increased, says Abigail Ross Hopper, SEIA’s president and chief executive officer. In a research note, an analyst at Roth Capital Partners projected that the virus would have a material impact on demand, and there are concerns that local inspectors may not be available to sign off on otherwise completed projects—a crucial step to bringing them online.

But while prospective customers may hesitate to make a big-ticket purchase or sign a long-term lease on a panel system right now, some sources of demand that existed before the outbreak remain, including the desire for backup power during storms or wildfires. “The California wildfires are going to happen, the utility shutdowns are going to happen,” says Vikram Aggarwal, chief executive officer of Boston-based EnergySage, which allows prospective solar customers to solicit quotes from installers. “You are seeing customers still interested.”

Installers who were used to completing deals at homeowners’ kitchen table are increasingly open to online sales, adds EnergySage communication manager Nick Liberati. “There’s no way around it given what’s going on.”

To contact the author of this story:
in Los Angeles at beckhouse@bloomberg.net

To contact the editor responsible for this story:
at jryan173@bloomberg.net