The auto industry will be closely watching whether and how the Environmental Protection Agency factors in consumer trends as it reviews greenhouse gas standards for model year 2022-2025 cars and trucks. At the urging of the industry, Trump administration officials are reconsidering a decision made by the outgoing Obama EPA in January that would maintain the stringency of those limits.

Supporters of the vehicle standards expect the Trump administration will ultimately ease the requirements. Even as automakers press for greater flexibility in the EPA and Transportation Department’s joint greenhouse gas and fuel economy program, companies like Ford and General Motors are preparing for a more fuel-efficient and electrified transportation future. Those moves are necessary, analysts say, to remain competitive as other countries seek deeper carbon cuts.

“When they look at fuel economy targets, it’s not just about meeting local targets anymore. They’re looking at fuel economy targets that must be met globally,” Devin Lindsay, a principal analyst with IHS Markit, told Bloomberg Environment. So even if American consumers are slow to buy into advanced transportation trends, U.S. auto companies are forced to invest in electric vehicles, “unless they want to leave certain segments to foreign manufacturers.”

And if the dozen states that have signed onto California’s standards follow its lead, that may break up the one national program automakers are aiming to keep intact to avoid a dual set of regulations. That group includes states like New York, Massachusetts, Washington, and Oregon that have been vocal opponents to Trump administration climate rollbacks. 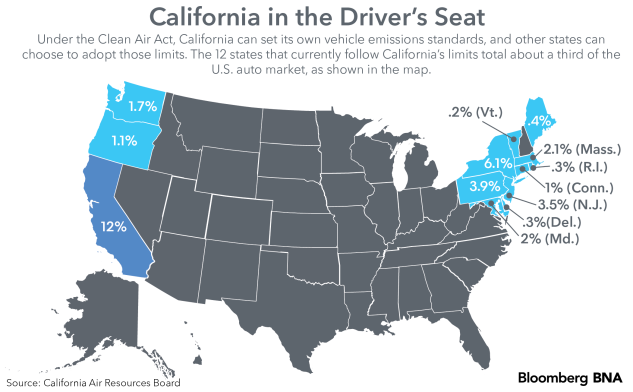 Battle of the Data

Automakers say the EPA has historically been off in its projections of consumer buy-in on more fuel efficient technologies, causing the agency to underestimate the difficulty with which the industry can comply with stricter limits. Consumer behavior is complicated as gas prices, industry marketing, and evolving tastes all affect economic choices.

“Absent significant uptake of the most efficient vehicles in the fleet, auto manufacturers are not maintaining the rates of improvement anticipated by” the EPA and the Transportation Department, writes the Alliance for Automobile Manufacturers in Oct. 5 comments to the EPA. The alliance represents a dozen major companies, including Ford, General Motors, Fiat Chrysler, BMW, Mercedes-Benz, Volkswagen, and Toyota.

Bloomberg Environment reached out to the big three U.S. automakers. Ford was unable to respond by press time. A spokesman for General Motors said the company did not submit individual comments, pointing to the Alliance’s submission. Fiat Chrysler declined to comment beyond the company’s written submission to the EPA docket.

However, Ford and General Motors have both announced plans to push electric vehicles.

The Alliance’s comments argue that while the industry was over-compliant in the early years of the program, initial model year 2016 data shows fuel efficiency is not improving as rapidly as it had in the past.

“It puts them in a quandary,” Lindsay said. He noted automakers are now looking to add electrification to larger passenger vehicles to improve fuel efficiency, “but that is a costly proposition. Can they afford to pass the price of the technology onto the consumer?”

But supporters of the Obama-era standards are countering with their own data. Dave Cooke, senior vehicles analyst with the Union of Concerned Scientists, told Bloomberg Environment automakers’ overcompliance in the program’s early years left them with a “huge credit bank.” In addition, he said data show the EPA “if anything was a little bit conservative,” projecting compliance would cost the industry more than it did.

Cooke said his review of comments from the Alliance and the Global Automakers, which represents the U.S. operations of foreign automakers, found little new data. “They were really treading over the same grounds they had complained to EPA previously about,” he said.

Automakers are facing pushback from an even broader set of stakeholders, however—as manufacturers, utilities, and other groups involved in advanced transportation technologies urge the EPA to craft the vehicle standards to boost the sector’s transformation.

For example, Tesla, Inc. is partnering with nearly a dozen electric-power utilities—including Exelon Corp., Pacific Gas & Electric Corp., Pepco, and Southern California Edison—and other advanced transportation companies to back the current model year 2022-2025 limits, which they hope will boost penetration of electric vehicles.

The partnership seeks to ensure that any changes to the standards are “targeted” and “will preserve and enhance program benefits to the greatest extent possible,” according to Oct. 5 comments from the National Coalition on Advanced Transportation.

Bob Wyman, an attorney with Latham & Watkins LLP who represents the coalition, told Bloomberg Environment the group is not wedded to any particular approach to the standards but wants to ensure “any future variant of them remains robust.” He suggested the coalition could help “brainstorm win-win” solutions.

But Cooke said there may be little incentive for California regulators to come to the negotiating table, and automakers may ultimately find themselves in a scenario where they’re required to sell more electric vehicles in states with more stringent requirements.

“It may be kind of like a little kid who’s looking at their birthday cake, and they are going to get a big slice but they ask their mother if they can eat it all, and their mother said yes. They’re sick now. And the mother probably shouldn’t have done that,” Gina McCarthy, former EPA chief, told an Oct 13 Harvard University forum. Automakers “have gone in and asked the president for everything, and he said yes.”

To contact the reporter on this story: Abby Smith in Washington at asmith@bna.com