A group of companies worth a combined $2.4 trillion have added their voice to a growing chorus calling for the economic recovery from the coronavirus to be green.

Adobe Inc., Unilever NV and more than 150 other companies have signed a statement asking officials to ensure their response to the pandemic is “grounded in bold climate action” and to prioritize moving to “a green economy by aligning policies and recovery plans with the latest climate science.”

Governments around the world are preparing rescue packages worth trillions of dollars, and the choices they make on how to spend this will have an impact on the environment for decades to come. Demands for a have already come from institutional investors, global, and officials in .

“Climate change will continue, regardless of Covid,” said Annica Bresky, president and chief executive officer of Stora Enso Oyj, a Finnish paper and packaging company that signed the statement. “We should use this opportunity that we have been given when restarting and recovering the economy to have the strategies in place that align with climate goals.”

The announcement Tuesday from global businesses was arranged by Science Based Targets initiative, a body set up by the United Nations and other global environmental organizations to help companies align with the climate goals set under the Paris Agreement on climate change. SBTi works with more than 800 businesses that have pledged to create, or have already put in place, plans to drastically cut emissions within the next few decades.

Cutting emissions to zero would require a firm to, say, convert its fleet of vehicles from combustion engines to electric ones. Public money spent on building a charging infrastructure and providing subsidies for such vehicles means the conversion won’t be as costly.

“You can say it will be cheaper for companies, but what it actually means is that companies will go faster” if spending aligns with climate goals, said Simpson, who is also a board member of SBTi. “These companies are committed to [cutting emissions] and what they need is an economic system that enables them to do it.”

Similarly, this is a chance for governments to move away from subsidies for fossil fuels and support clean energy, said Kim Hellstrom, climate strategy lead at Hennes & Mauritz AB. The fast fashion retailer signed the statement, and among its environmental pledges is a goal to use 100% renewable energy by 2030.

“This is the optimal opportunity to do something about what we have been doing wrong for so long,” he said.

About two-thirds of the companies that signed the statement have their headquarters in Europe. It’s a reflection of the fact that the continent has the strictest environmental regulations, said Simpson. The European Union is working to achieve net-zero emissions by 2050, and companies will need to align with the regulations that governments set. 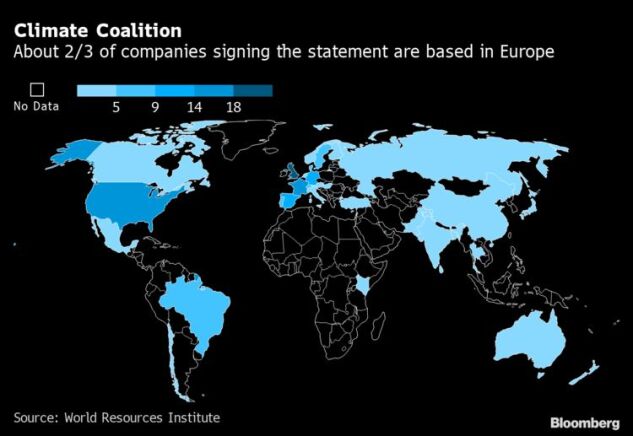 Ultimately, even as the world is coping with a whose damage might dwarf that wrought by the Great Recession about a decade ago, it is in these companies’ self-interest to operate in a world that’s stable and growing rather than battered by climate impacts and struggling. It’s a sentiment echoed by Carine de Boissezon, sustainable development director at French energy company EDF SA.

“What is critical is how we will recover from the crisis,” she said. “What we learned from 2008 is that the choices that are being made now will shape the future.”

To contact the authors of this story:
in London at arathi39@bloomberg.net

To contact the editor responsible for this story:
at gturner35@bloomberg.net