Smoke billows from smokestacks and a coal-fired generator at a steel factory on in November 2015 in the industrial province of Hebei, China.
Photographer: Kevin Frayer/Getty Images

Yet these strides are clouded by the fact that China is still using some green bonds to back what the government calls “clean coal” projects, and that has drawn criticism from environmental activists and others.

“Green bonds have enormous potential to further propel the growth and development of clean energy in China, and not a single cent of that money should go into propping up coal,” Gan Yiwei, a climate and energy campaigner at Greenpeace East Asia, told Bloomberg Environment.

A lack of transparency in tracking whether funds are actually going toward the projects they were issued for is also is seen as problematic, particularly as debt-ridden local governments scramble for cash in China.

Around 3 percent of China’s green bond issuances are verified as backing coal-related projects, but the figure could be as high as 12 percent, according to analysts with BNEF. More transparency is needed to verify where the funding is actually going to clear up any discrepancies, however.

“I think the Chinese government is working to improve the standards, criteria, and selection of projects,” Cindy Wong, an analyst with BNEF in Hong Kong, told Bloomberg Environment. “A gray area is infrastructure. A lot of times the only way to get to know these bonds is through the prospectus. There is no post-issuance checking of where the funding is going.”

While around 20 percent of China’s green bonds are internationally certified through such organizations as Climate Bonds Initiative and the International Capital Market Association, and third-party verification of the bonds—at least at the prospectus level—is up to around 70 percent, questions remain about just how green some of these bonds are.

“Coal projects, especially new builds, are by no measure ‘green,’ ” Gan said. “That China includes certain coal projects in its green bond criteria is out of step with global standards and must be change.”

Carbon emissions from just those six projects would amount to 13 million metric tons annually—or nearly the equivalent to total carbon emissions reductions made by half the green bonds issued in China in 2016, the organization said.

Ma Jun, former chief economist at the People’s Bank of China and now co-chairman of the Group of 20 Green Finance Group, said late last year, that state-run media reports indicate that China’s priorities of addressing air pollution justify the use of green bond funding on coal projects, though standards will likely need to become more stringent.

China is working to improve its standards for the green bond market. The China Securities Regulatory Commission released guidelines in March 2017 for companies listed in the stock exchanges that issue green bonds. The commission also released guidelines with the People’s Bank of China in December 2017 regarding rules for third-party verification organizations and their activities in the country.

Many are facing similar difficulties of setting standards and defining just how green projects need to be for a green bond label to be attached to it, Charles Bedford, regional managing director of the Asia-Pacific region for the Nature Conservancy, told Bloomberg Environment.

“Making coal less bad doesn’t make for a green bond, but making coal less bad isn’t a bad thing,” Bedford said. “If you look at the other financing [in China] around energy, it is enormous. Billions are being spent on renewables, pollution control, building efficiency … it is easy to pick at the outliers.”

Last December, the United Nations Environment Program Inquiry, along with the International Institute of Green Finance of the Central University of Finance and Economics, a Chinese think tank, released a progress report on the country’s efforts to build a green finance system.

It highlighted that just under $1 trillion worth of green and low-carbon projects have been listed in China’s national catalog of public-private partnerships and that the central government’s push to develop green finance has led to a rapid increase in establishing green development funds at the local and provincial level to steer capital into environmental projects.

As an example of how local governments are trying to ride the green finance wave, the central government in Beijing approved setting up countrywide “green finance pilot zones,” the most recent being in Guangdong, Zhejiang, Jiangxi, and Guizhou provinces, and the autonomous region of Xinjiang.

On a site visit to the Guangdong zone in the economically stagnant Huadu District in northern Guangzhou, capital of the province, Bloomberg Environment was given a tour of the Innovative Experimental Zone for Advancing Green Finance Reform a day before its official launch in late December. 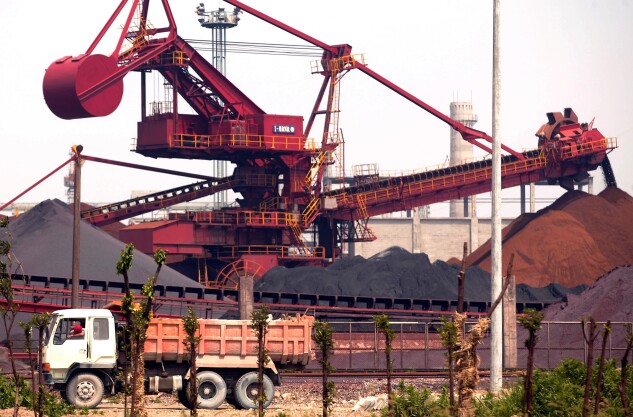 A dump truck backs up next to the massive coal port in Zhejiang province.
Photographer: Stephen Shaver/Bloomberg via Getty Images

The zone eventually will be home to the Guangdong Carbon Emissions Trading Center, an office of the Guangzhou stock exchange related to green financial products, and other industry, financial, and service company offices devoted to greening the economy.

So far, more than 90 companies have pledged to locate offices there, drawn by incentives such as tax refunds for the year they set up an office, reward programs to attract executives with a maximum of about $50,000 that can be used for housing and living costs, rental and other financial subsidies, and fast-track business license processing at the facility.

Representatives of the zone indicated that the registered capital of companies signed up so far was more than $780 million and that tax refunds to those companies were more than $800,000.

Still, more needs to be done to define what projects are “green” in China to prevent “rising greenwashing” and to do more to establish databases and evaluation systems for local green development, the UNEP said in its report.

“The green bond market is clearly not a green wash, but is immature and will be uneven in its integrity for some time to come,” Simon Zadek, co-director of the UNEP Inquiry, told Bloomberg Environment. “Over time, the market will mature and that means that what is and is not green will become clearer and standards will be more consistently applied.

“China’s decision to include so-called clean coal is not aligned to emerging international standards and practice, and it is to be hoped that over time this will change, although it is worth noting that investments that upgrade old coal fired power stations to be cleaner may well have a place in the transition pathway to a low-carbon future,” he said.