In August, Hurricane Harvey dumped over 50 inches of rain in Texas, resulting in widespread flooding and destruction, including a series of explosions at the Arkema Inc. chemical plant located on a flood plain in Crosby, Texas—30 miles outside Houston.

Now, the hundreds of chemical, manufacturing, and refining facilities dotting the swamps and channels of Texas and Louisiana are facing doubts over their previous assumptions about wind, water, and losing power during potentially bigger disasters than Hurricane Harvey, Sutherland said.

“Don’t be lulled into a false sense of safety that it can’t or won’t happen here,” Sutherland told reporters during a press conference in Washington about the CSB investigation into the Arkema incident.

It was the first hurricane-related incident the agency has investigated in several years and could prove to be an opportunity for the CSB to issue guidance for industry to prep for extreme weather, Sutherland told reporters.

Arkema’s backup generators were placed two feet above ground, but the water rose above three feet, the CSB found in their initial investigation. While Arkema planned for this type of event, it wasn’t enough, Sutherland said.

The CSB plans to learn why it wasn’t enough and to share that with other companies. The agency would like to issue a final report on Arkema by June 2018, ahead of next hurricane season.

When Arkema was built, the facility wasn’t located in a flood plain, Mark Wingard, CSB lead investigator, said at the press conference. That changed in 2007 when regulators reassessed the flood plains, and the redrawn maps placed the facility in the 100- and 500-year flood plains.

There is no reason to place a hazardous material site in a flood zone, Mannan said.

“Storms like Katrina, Rita and now Harvey are going to happen more often,” Mannan said. “I don’t know if it’s climate change or something else, but with the chemical industry, this is an issue that’s going to need to be addressed.”

The chemical industry needs to build plants so that the consequences are less severe when the worst-case scenario happens. That means away from areas prone to flooding and areas with high population density, Mannan said.

A Tale of Two Plants

Just 3 miles down the road from the Arkema plant, another custom chemical processing plant owned by KMCO LP began preparing for the storm a week before Harvey made landfall, Keith Terhune, vice president of industrial and supply chain at KMCO LLC told Bloomberg Environment.

As soon as hurricane season begins, KMCO officials, like those of many other companies in the region, constantly watch weather reports in the Gulf region for any signs that activity might develop into a named storm.

Harvey came in quickly, so the company had less lead time than with other storms, Terhune said.

But for the week leading up to the storm’s landfall, KMCO officials met daily. As the hurricane came closer, the meetings increased and the company went through a checkpoint system, secured the plant, and made sure it had the resources, such as backup generators, to support it for a few days.

KMCO’s site is not located in the flood plain, but it does have runoff problems in heavy rain with water pooling around the plant, Terhune said. Some low-lying areas of the plant flooded during Harvey, but most of the processing areas for chemicals are diked and the company was able to pump water out of the dikes as needed, he said. 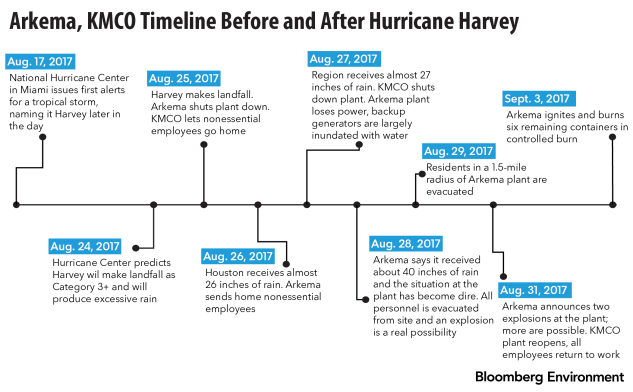 When it became clear the plant likely would be affected by the hurricane, the company planned for a 10-person crew—including operators, mechanics and electricians—to stay through the storm, which lasted from Aug. 27 to Aug. 29. KMCO officials also shut the plant down by Aug. 27.

The company didn’t move any chemicals out of the plant and brought in additional backup generators, Terhune said. If those generators failed, the company could have neutralized the chemicals.

KMCO’s emergency plan worked, he said, and the biggest challenge the company faced was getting employees back to work. Some had flooded homes, and others weren’t able to get gas for their cars.

As operations at KMCO were returning to normal following the storm, Arkema’s challenges were just beginning, according to the timeline put together by company and federal officials.

A series of explosions occurred around Arkema’s plant from Aug. 31 to Sept. 3. Backup generators at the plant failed and weren’t able to cool refrigerated trucks containing containers of organic peroxide.

As temperatures rose, the chemicals ignited. When company officials realized the backup generators had failed, they announced that an evacuation of residents within a 1.5 mile radius of the plant was needed.

Arkema is now facing multiple lawsuits from county governments, residents, and first responders, who allege the company was unprepared for the storm. But the plant’s location in a flood plain came as no surprise to company officials, who said in a press conference shortly after the first explosion that the company had gone through multiple floods but had never seen anything like this.

A complaint filed in the U.S. District Court for the Southern District of Texas by nearby residents said the company knew that organic peroxide products would burst into flames if not refrigerated, and that the company should have known the plant lies in a flood plain and is prone to flooding. The company also should have known that the loss of power and flooding would likely occur during a hurricane.

The plant is also under investigation by the Environmental Protection Agency, which last inspected the plant in 2003.

In light of Harvey, the chemical industry needs to re-examine its process hazards analysis, and consider very low-probability events, Mannan said, such as “500-year events” that can bring down over 50 inches of water.

Not everything in a plant can be built to withstand a 500-year event, but some things have to be built to that standard, Mannan said. He and his team are studying Harvey to try to determine not only the failures of companies’ emergency plans, but also things companies did that worked, such as removing certain chemicals from inventories ahead of the storm.

“Harvey didn’t materialize overnight,” Mannan said. “They had some time to prepare for it. Particularly, if they had gone through the scenario analysis and did planning and training for it.”

Mannan would like to have some type of national tracking system of incidents in order to perform trend analysis.

“Are we getting better?” Mannan asked. “Should we target our resources in more incident prone chemicals and processes?”

More information about stored chemicals needs to be shared with the community as well as with first responders, who are often casualties when accidents happen at facilities, Mannan said.

Considering the concentration of chemical plants in Texas and the ferocity of the storm, the impacts from Harvey were limited, Mannan said.

To contact the reporters on this story: Nushin Huq in Houston at nHuq@bna.com

To contact the editors responsible for this story: Rachael Daigle at rdaigle@bna.com