The Trump administration wants to try to limit California’s special ability to require increasing purchase of electric vehicles in the state—but major automakers say they have no intention of reversing course on their electric vehicle plans.

The Environmental Protection Agency and the Transportation Department are targeting California’s authority under the Clean Air Act to set stricter tailpipe emissions limits and zero emission vehicle requirements than the federal government.

“By 2020, more than 15 percent of our U.S. lineup will consist of hybrid, plug-in hybrid, and fuel cell electric vehicles. And that’s regardless of what regulation does,” Fred Turatti, general manager of environmental regulation for Toyota, told a July 23 event hosted by the Energy Consumer Market Alignment Project, a recently launched energy policy nonprofit group.

Toyota isn’t an outlier. Other major automakers told Bloomberg Environment, or have said publicly, they will stay on track toward their electric vehicle plans.

And analysts say that is because China—and the rapid growth in the country’s electric vehicle market—is a larger and more long-term driver for U.S. and foreign automakers’ focus on electric vehicles, more so than stringent federal fuel economy regulations or state zero emission vehicle mandates.

That ultimately puts the Trump administration move—which, if successful, could undercut California’s requirement for more than 15 percent zero emission vehicle sales in 2025—at odds with the investment path on which most major automakers are headed. To date, nine other states also follow the California zero emission vehicle requirements, including Massachusetts, New York, and Oregon.

“China is a very important market. It is the largest global auto market already, and it is likely to remain so in the next few years,” Nikolas Soulopoulos, a senior analyst for advanced transportation at Bloomberg New Energy Finance, told Bloomberg Environment.

If automakers want to capture part of the Chinese market, they need to keep pace on electric vehicle investment and development, even if they might not be selling as many in the United States, Soulopoulos added.

U.S. automakers are already entering China’s market with force. General Motors and its joint ventures sold 40 percent of its 2017 global sales in China, according to data from Bloomberg New Energy Finance. 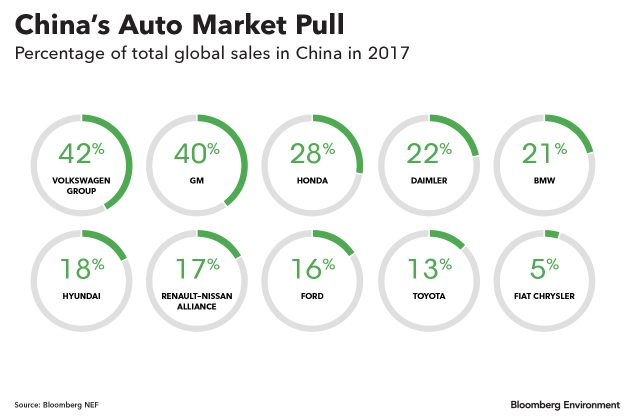 The Chinese program is modeled in part off of California’s mandate, Soulopoulos said, noting the Chinese government held meetings with California regulators seeking help in developing its regulation.

Toyota’s overall goal is to reduce carbon dioxide emissions from its vehicles by 90 percent by 2050 compared to 2010 levels, according to Turatti.

By 2025, every model in the Lexus and Toyota lineup will offer an electrified option or be a zero-emission vehicle, Turatti told the July 23 event. In 2030, the company is aiming to have about half of its vehicles sold globally per year be electric cars. That equates to roughly 5.5 million electrified cars per year, including 1 million zero emission vehicles, Turatti said.

“Obviously there are going to be regional differences depending on what consumers want, but we will get to those numbers regardless of what the regulations say,” he added.

“Our truck customers want to reduce [greenhouse gases] and pay less at pump but not sacrifice power,” Christin Baker, a spokeswoman for Ford Motor Company, told Bloomberg Environment in a statement. The company announced in January 2018 plans to deliver 40 electric vehicle models globally by 2022.

One of the first new electric vehicle models Ford announced is a hybrid F-150 pickup truck, Baker added. “And as the best-selling vehicle in the U.S. for more than 40 years, the adoption of a hybrid truck can make a big impact,” she said.

Sales Not on Pace

Even so, automakers have long argued consumer adoption of electric vehicles isn’t on pace to meet the requirements set out by California.

Zero emission vehicles represented just over 1 percent of nationwide sales in 2017, according to data from the Alliance of Automobile Manufacturers, which represents a dozen U.S. automakers including Ford, General Motors, and Fiat Chrysler. 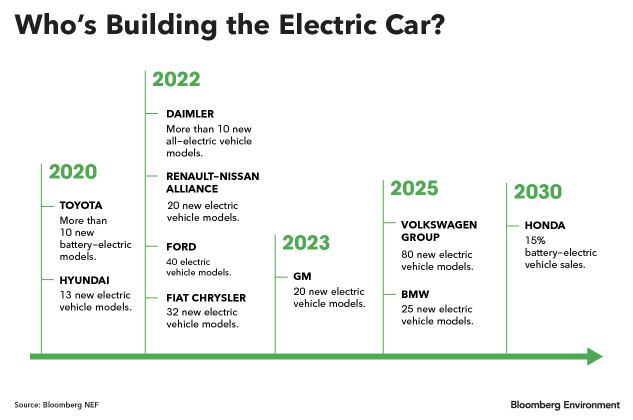 The trade group, in June letters to the nine governors whose states follow California’s program, urged state governments to purchase zero emission vehicles for their own fleets to help boost sales. “The private sector has responded and consumers are not seeking [zero emission vehicles] in the percentage that is required,” the Alliance wrote.

Softer fuel economy standards and any elimination of California’s zero emission vehicle program could cause at least a slight drop-off in U.S. consumer purchases of electric vehicles. “It has the potential to be a blow to the adoption in the country,” Soulopoulos of Bloomberg New Energy Finance said.

But he suggested grassroots consumer acceptance of electric vehicles is still largely a question mark, not just in the United States but also globally.

That could change as automakers begin to offer more models, including electrified SUVs and pickup trucks. The industry offers about 120 electrified models right now, but that number will double at least in the next three to four years based on the lineup companies have already announced, Soulopoulos said.

“Supportive government policy is important, but as we see these new models introduced in the market, they will cover a large range of offerings,” he added. “People would go and buy them.”