The Canadian environment minister, who said finding the right words to describe climate change is one of the most challenging parts of her job, is testing her latest pitch.

“If you care about debt, you wouldn’t leave credit-card debt to your kids,” she told Bloomberg Environment in a recent interview. “That’s exactly what climate change is.”

Addressing climate change has been one of main tasks for the 47-year-old former lawyer and international development worker during her three years as minister. She has sought to navigate the trials of implementing carbon pricing, one of the most controversial policies of Prime Minister Justin Trudeau‘s government.

“I’ve absolutely changed how I talk about climate change,” she said, adding that she is trying to make her language more closely related to people’s everyday realities.

McKenna will have several high-profile upcoming opportunities to discuss the subject. In September, she is going to California Gov. Jerry Brown (D)'s Climate Action Summit in San Francisco, then hosting environment ministers from the seven leading industrialized nations in Nova Scotia, followed by traveling to Climate Week NYC, a gathering of hundreds of businesses, governments, and others. 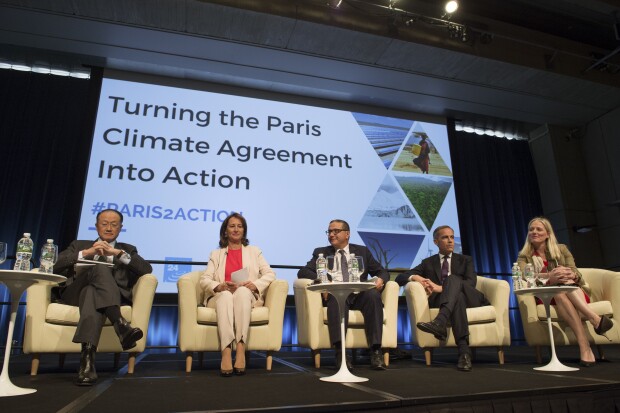 “I have to think about what are the best ways for me to engage with people, to talk with them, to listen to them, and to talk a little bit about what we’re trying to do,” she said. “I’m still trying to figure that out.”

But Canada’s significant oil and gas industry, not to mention antipathy between its petroleum-producing West and economically powerful East, makes the country a difficult place to achieve the goals of the 2015 Paris Agreement on climate change.

She often faces a barrage of animosity on social media, perhaps most infamously in September 2017 when Conservative MP Gerry Ritz called her “Climate Barbie” on Twitter. McKenna and Trudeau denounced the comment, and Ritz apologized.

The government is losing the communications battle on carbon pricing by only sticking to platitudes without delving deeper, said Christopher Ragan, a McGill University economics professor and chair of Canada’s Ecofiscal Commission, an economic research group. What is missing, he said, is more detail on why carbon pricing is more efficient than other options and how it creates economic opportunities for some businesses.

“Some other communication will jump in to fill that void, and so you’re opening yourself up to all kinds of myths and misinformation from your opponents,” he said.

Other critics said McKenna made the carbon pricing law too weak and given too many exemptions to specific industries.

“Canada has done less than most to date to contribute to the global effort to decarbonize,” Dalhousie University law professor Meinhard Doelle wrote in a recent essay.

According to McKenna’s admirers, she has notched a number of successes.

“You’d probably have to go back 25 years to Jean Charest to find anyone who’s accomplished as much as she has,” University of Ottawa law and economics professor Stewart Elgie said, referring to Canada’s environment minister when the country championed the 1992 Earth Summit in Rio de Janeiro.

McKenna has helped negotiate a broad emissions reduction agreement among provinces and territories, pushed for Canada to take on a greater international role on climate change as the U.S. pulled away, introduced legislation to amend environmental assessments for industrial projects, and launched a federal carbon pricing scheme.

She credits her time as a competitive swimmer for the University of Toronto for instilling in her the importance of focus and long-term planning.

“You’re going to trials and then every single day you work really, really hard,” she said. “You’re going to have some setbacks, and you just get back into the pool, and you keep on working hard and put your head down.”

‘All the Energy in the World’

McKenna’s political career didn’t come easy. She unseated a heavy favorite from the left-leaning New Democratic Party in the 2015 House of Commons general election in an electoral district in Ottawa, where she lives with her husband and three children.

The win shocked political watchers. It came after a campaign she said involved knocking on more than 100,000 doors.

When she arrived in Trudeau’s Cabinet, colleagues took note of her drive and discipline.

“She had all the energy in the world, and she showed that as a candidate and didn’t miss a step” when she took her current job, International Trade Minister Jim Carr said.

The Paris climate pact’s goals became the parameters for negotiations of a national agreement between Ottawa, provinces, and territories that McKenna shepherded in 2016.

Some provinces had carbon pricing in place for nearly a decade while others swore that a new federal tax would never see the light of day.

The Pan-Canadian Framework on Clean Growth and Climate Change, as the final deal was called, had 11 of 13 provinces and territories sign on, but that’s an example of how Canada’s system of cooperative federalism is supposed to work, said the University of Ottawa’s Elgie, who also runs the research group Smart Prosperity.

The near-consensus has hit big stumbling blocks since it was signed. Ontario began dismantling its carbon pricing system when a new government came into power in June, and Atlantic provinces are showing a reluctance to price carbon as steeply as Ottawa would like.

On Aug. 30, Alberta’s leader pulled out of the pact in protest after a federal court struck down Trudeau’s approval of a C$4.5 billion ($3.5 billion) Trans Mountain pipeline expansion.

Changes in government outside Canada have made McKenna’s ambitions tough as well. The arrival of the Trump administration on the scene tore up a raft of cooperation between Ottawa and Washington on the environment, from vehicle emissions to Paris targets.

But it also opened up an opportunity for Canada, McKenna said.

After the U.S. announced that it would pull out of the Paris deal, McKenna called counterparts in the European Union and China to organize a meeting. The Europeans and Chinese were a bit reluctant at first, but eventually they were convinced to meet, she said.

The three parties, along with other invited nations, have held the Ministerial Meeting on Climate Action twice—once in Montreal in September 2017 and again in Brussels this past June.

Since then, McKenna spearheaded a coal reduction agreement with the U.K., hosted a meeting of women involved in climate change, and taken on a large role during Canada’s presidency of the Group of Seven meeting this year.

“When things change you need to figure out, ‘Who are my new dance partners?’ ” she said.

(Adds context in the 29th paragraph about Alberta pulling out of the climate pact.)

To contact the reporter responsible for this story: James Munson in Ottawa at correspondents@bloomberglaw.com