Democratic attorneys general riding a blue wave into office could do a U-turn on lawsuits spearheaded by their Republican predecessors—many of which challenge tighter federal environmental regulations.

The shuffling politics won’t materially affect challenges to such rules as the EPA’s redefinition of the reach of the nation’s clean water law, because other plaintiffs are still pushing the lawsuits.

Legal experts say, however, it highlights how environmental litigation has become too central to policy making, and states have become too litigious since a landmark climate change decision opened the courthouse doors to them.

Incoming attorneys general dropping out of cases or reversing course can have real consequences: They can create confusion about whether the arguments of ex-attorneys general still apply or whether orders to halt federal regulations sought by their predecessors should still be enforced in states that have flipped.

“I think if an attorney general is smart, they won’t change everything,” Brad Mank, a professor at the University of Cincinnati College of Law, told Bloomberg Environment. “If you mildly disagree, I don’t think an attorney general should change. You look like a fool.”

A prime example is the EPA’s Waters of the U.S. rule (WOTUS), which expanded the types of bodies of water that the federal government could regulate.

Democrats captured four attorney general seats, and that means states like Michigan and Wisconsin—where departing Republicans Bill Schuette and Brad Schimel sued over the waters rule—may now be on the opposite side of the litigation. 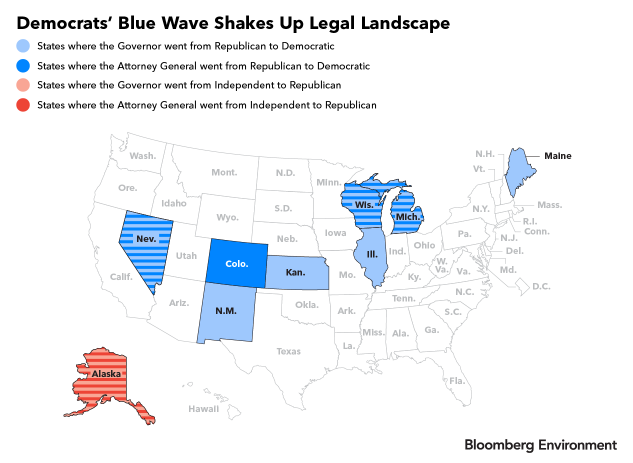 Turning on a Dime

Many Republicans and industry groups vigorously opposed the Obama administration rule, arguing it could force businesses to obtain permits for small streams or ditches that previously hadn’t been regulated.

Schimel was one of several Republican attorneys general who successfully sued and got an injunction earlier this year that blocked WOTUS from taking effect in their states. Schuette was also seeking a injunction for Michigan, but the judge there hasn’t ruled yet.

With both Schimel and Schuette out of the picture, the new Democratic attorneys general in these states could ask the courts to lift the injunction, which would make WOTUS the law of the land in Wisconsin and Michigan, Blan Holman, an attorney with the Southern Environmental Law Center, said.

“I don’t think there’s anything that would stop them from doing that,” Holman, who represents environmentalists in the ongoing WOTUS litigation, said. “That’s part of the reason, I suppose, to elect an attorney general.”

Dana Nessel, the new attorney general of Michigan, will be making decisions about whether to continue the lawsuits she inherited from Schuette “in the near future,” her spokeswoman Kelly Rossman-McKinney told Bloomberg Environment.

‘Courts Should Be Wary’

This electoral oscillation is a relatively recent phenomenon, according to Tara Grove, a constitutional law professor at the College of William & Mary. That’s because states used to have fewer opportunities to sue federal agencies.

Historically, a state was only allowed to sue when a federal agency was encroaching on its authority, Grove said. That changed after the landmark 2007 climate change case Massachusetts v. EPA, in which the U.S. Supreme Court ruled that states can also sue when federal agencies fail to address a pressing national issue, she said.

This made it much easier for attorneys general to take federal agencies to court. That’s exactly what they’ve done, with coalitions of Republican states suing over the Obama administration’s environmental regulations and issues such as the Affordable Care Act.

This surge in state-led suits against federal agencies hasn’t stopped during the current administration. Democratic attorneys general have sued over the Trump administration’s rollbacks of environmental regulations, the Muslim travel ban, its handling of asylum seekers, and plans to build a wall on the U.S.-Mexico border.

But Grove said federal policy making isn’t supposed to go this way. When a handful of states sues to force an agency to issue a new policy or to overturn an existing one, they are essentially using the courts as a veto over matters that affect the entire country, she told Bloomberg Environment.

“Courts should be wary” of these suits, she said. “In my view, that’s not something an individual state’s voters should get to decide.”

Republican legislatures in North Carolina, Wisconsin, and Michigan responded to Democratic takeovers of the statehouse by moving to limit the power of their governors and attorneys general to represent the state in court.

Those moves have infuriated Democrats and haven’t all been successful. But Mank said there are good nonpolitical reasons to shift the power to litigate away from the attorney general.

“That legislature may be more representative in speaking for the whole state,” he said.

Adam Kron, an attorney with the Environmental Integrity Project, said it would be wrong to make it harder for states to take the federal government to court.

He acknowledged that state-initiated environmental lawsuits are often politically motivated and can be upended when state offices change hands. But he said these downsides are outweighed by the power to act as a check on federal overreach.

“The Trump EPA has attempted to undo and subvert rules,” Kron told Bloomberg Environment. “Lawsuits are an important bulwark against that.”

But there may be even larger forces at play here.

Amy Wildermuth, the dean of the University of Pittsburgh law school, said this issue wouldn’t even be a problem if Congress would update the existing environmental laws to resolve disputes that have been playing out in the courts for years.

Until Congress does, litigation is going to turn into politics by another name.

“If we’re turning to the courts to do what Congress should do, of course it’s going to be political,” Wildermuth told Bloomberg Environment.