Flames burn during the McKinney Fire in the Klamath National Forest northwest of Yreka, Calif., on July 31.
Photographer: David McNew/AFP via Getty Images

Congress is spending billions to save communities from Western megafires by thinning large swaths of forests even as scientists say climate change-driven drought and heat are too extreme for it to work.

The money would be better spent thinning woods closest to homes and shoring up houses against embers raining down from firestorms, according to academics, former agency officials, and others who study wildfires.

“If our goal is to keep homes and communities from burning, the experts are telling us to focus from the home outwards. First, harden the home so it is less likely to ignite,” said Beverly Law, an emeritus professor of forestry at Oregon State University.

Megafires are sustained by drought and heat, and “no amount of thinning treatment will prevent such fires from occurring,” she said.

Wildfire conditions due to climate change are so volatile in the drought-stricken West that it took less than three days in July for California’s McKinney Fire to explode into an inferno larger than Seattle, generating its own thunderstorms as it became California’s largest wildfire of the year.

The McKinney Fire is among hundreds of conflagrations that have burned an area of the West the equivalent of Michigan since 2018, the year the Camp Fire incinerated Paradise, Calif.

Cutting greenhouse gas emissions will do more to turn down the heat on wildfires than thinning, Law said—a view shared by others who study wildfires.

Not Designed for Extremes

But clearing forests of densely packed trees, brush, dead trees, and other flammable plants to reduce the intensity and spread of fires—practices known as “hazardous fuels treatments” — is a main focus of $1 billion earmarked in a package of wildfire bills passed by the House in July and at least $3.6 billion in last year’s infrastructure law.

Democrats’ climate and tax deal with Sen. Joe Manchin (D-W.Va.) earmarks $1.8 billion for thinning national forests near communities. The Biden administration wants to transform entire landscapes to withstand wildfires by clearing vegetation from 50 million acres of public and private forests over a decade.

Thinning involves clearing out forests by hand, with heavy machinery or herbicides, or using intentionally set but controlled fires. 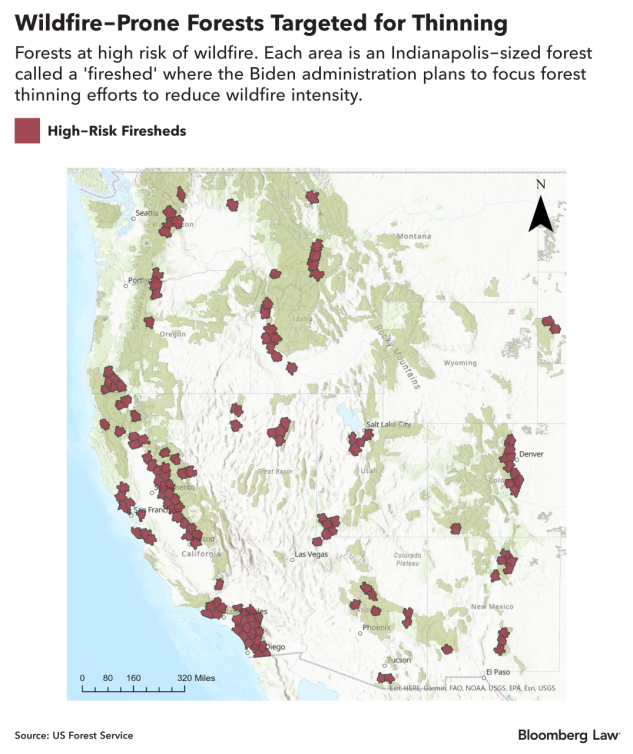 The US Forest Service says its research shows thinning the forests works. The agencies are focusing on thinning numerous Indianapolis-sized chunks of high-risk forests called “firesheds” in Western mountains.

The goal is to reduce risks associated with wildfire by getting the infernos to “behave” while also supporting the wood products industry, Forest Service Chief Randy Moore told Bloomberg Law.

“We have to create new markets so as we remove some of that material on the landscape, we can create jobs,” Moore said.

Colorado’s most destructive wildfire, last December’s Marshall Fire, incinerated more than 1,000 suburban homes and buildings amid high winter winds in the plains of Boulder County—miles from the nearest forest.

Most homes destroyed in wildfires burn because embers get inside the house through vents, not because they’re in the inferno’s path.

“It’s the houses that start each other on fire, not the forest,” said Jim Furnish, a retired deputy chief of the Forest Service.

The package of wildfire bills would spend $182 million for wildfire risk reduction research, including the promotion and use of less-flammable building materials, at the National Institutes of Standards and Technology. Another $102 million is earmarked for the Federal Emergency Management Agency for wildfire preparation, promotion of better materials, and to retrofit existing homes.

Federal money should be spent on helping homeowners remodel their homes to make them more resistant to the embers, Law said. They can install ember-proof vents, use wildfire-resistant landscaping, and clear gutters of debris.

Wooden fences can spread fire in suburban areas, and lawmakers could consider updating urban land use plans and building codes to ensure that homes and yard structures are built of less-flammable materials, said Tony Cheng, a co-director of the Southwest Ecological Restoration Institutes at Colorado State University. The institutes are receiving $20 million from the infrastructure law to compile data on fuels treatment efforts.

As the federal government focuses on forest thinning, no scientific consensus exists that removing vegetation, especially at a landscape-scale, will save communities in the paths of firestorms amid the West’s historic 23-year drought.

The science is clear that “there isn’t a great connection between home loss and these fuel treatments,” though they sometimes help firefighters gain a foothold on some fires, Cheng said.

Moore, the Forest Service chief, said the agency is confident that as homes are built deeper and deeper into the woods, its research shows that removing “overstocked” trees is the best way to protect them.

“We know where we do nothing, or where we do a little, we’re seeing the evidence out on the landscape,” Moore said, referring to recent megafires. “We feel compelled to do something.”

But scientists say that even though vegetation has built up in forests because of a century of fire suppression, the extreme drought and heat are making large-scale thinning projects ineffective.

“When the whole forest is a dry tinderbox, having one area where you’ve done a fuels reduction may not be anywhere near enough to reduce fire risk,” said William Anderegg, a professor of biological sciences at the University of Utah. “We are not doing nearly enough to tackle the root of the problem, which is climate change.”

It makes “intuitive sense” that thinning forests would dramatically reduce wildfire risks, but independent research doesn’t back that up, said Chad Hanson, director of the John Muir Project, a forest advocacy group. Forest thinning is often motivated by logging interests instead of forest and community protection, he said.

“Are these thinning projects stopping weather and climate-driven fires?” he asked. “The answer is no.”

Clearing out forests may increase wildfire risk because it will further dry vegetation by exposing it to greater heat, sunlight and wind, said Michael Flannigan, science director for the Canadian Partnership for Wildland Fire Science at the University of Alberta.

Thinning 50 million acres at a landscape-scale is “wasting your time and money” unless fuels treatments occur very close to communities that could burn and are maintained so the trees don’t grow back, he said.

“Fire is opportunistic,” he said. “It jumps over rivers that are a kilometer wide. You’re not going to control it.”