Texas and other red states sued the Biden administration for canceling the $8 billion Keystone XL pipeline, stepping up a legal fight over the controversial pipeline that is extending into a third presidential administration.

President lacks unilateral authority to change energy policy set by Congress, according to a complaint filed in a Texas federal court on Wednesday. The suit was filed by Texas Attorney General and Montana Attorney General .

“The executive’s unilateral decision to revoke the Keystone XL permit is contrary to the constitutional structure to which the states agreed at the time of ratification,” the states said. “The executive’s decision also encroaches upon the states’ abilities to steward and control the lands within their borders.”

The states said in the complaint they will lose out on “tens of millions of dollars” in tax revenue from the construction and operation of the Keystone XL, In Montana, South Dakota, and Nebraska, the total estimated property tax from the Keystone XL project in the first full year of operations is approximately $55.6 million, according to the complaint. 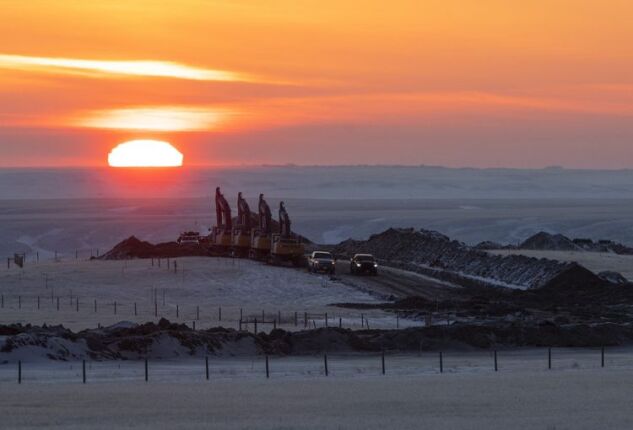 Crews work on a right of way for the Keystone XL pipeline near Oyen, Alberta, Canada.
Photographer: Jason Franson/Bloomberg

The pipeline permit, which would connect oil sands in Canada to U.S. refiners, was approved by the Trump administration in 2019 after previously being rejected by President . Biden issued an executive order revoking the Keystone XL pipeline’s cross-border presidential permit as soon as he entered office in January. The Keystone pipeline is backed by the Canadian government, construction and energy industries but opposed by environmentalists, tribes and some landowners.

“The argument that transporting crude oil via pipeline is worse for the environment than by rail or shipment is preposterous and has been disproven numerous times, even by the Obama-Biden State Department,” said Oklahoma Attorney General . “The Keystone Pipeline also will move the United States closer to energy independence.”

Canadian pipeline giant had sued the Obama administration in a Texas federal court, similarly arguing that Obama’s rejection of the project conflicted with the will of Congress. TC Energy dropped the suit in 2017, without resolution, after Trump granted a presidential permit.

Alberta also threw its weight behind Keystone XL last year, committing $5.3 billion in investment and loans for the project.

“Currently we are examining all options following the executive order, including looking at all avenues – including trade agreements – to recoup our investment if the project,” the Premier of Alberta’s office said in an emailed statement.

If built, the pipeline would stretch some 1,200 miles (1,900 kilometers) from Alberta oil sands to Steele City, Nebraska, to connect with existing infrastructure to move oil to Gulf Coast refineries.

(Updates with background, details from complaint)

To contact the reporters on this story:
in San Francisco at mnayak21@bloomberg.net;
in Arlington at egilmer@bloomberg.net