Food and bags ready to distribute sit in a giant refrigerator at a Feeding South Florida facility in Pembroke Park, Fla., in 2020.
Photographer: Jayme Gershen/Bloomberg via Getty Images

The EPA has proposed a rule phasing down the use of hydrofluorocarbons, a potent contributor to global warming—and the Biden administration’s first major attempt at tackling climate change.

It’s the first time the Environmental Protection Agency has set a cap on HFCs. But it won’t be the last—the EPA has already said it’s going to propose new rules for auto emissions in July and methane emissions in September.

Here’s an explanation of what’s happened so far and what’s at stake:

HFCs are human-created compounds used in air conditioning, refrigeration, aerosols, and fire protection. They were created as a substitute for a class of other substances—chlorofluorocarbons (CFCs) and hydrochlorofluorocarbons (HCFCs)—which were phased out globally under the 1987 Montreal Protocol.

Unlike CFCs and HCFCs, HFCs don’t hurt the ozone layer because they don’t contain chlorine. But they’re still a powerful greenhouse gas.

HFCs only account for about 1% to 3% of global greenhouse gas emissions, but have 3,000 times more global warming potential than carbon dioxide, some estimates show.

The proposed rule sets up an allowance system for HFC producers and consumers to gradually bring down the amount they make and use, a regulatory approach known as “cap and replace.”

The first allowances will be set for 2022 and 2023. The EPA says it’ll establish future yearly allowances in a separate rulemaking, but the overall goal is to step down HFCs every year until 2036. By that time, the nation’s HFCs will be cut by 85%.

Separately, the agency will create a small pool of allowances for new market entrants. The proposal also provides carve-outs for specific applications, such as mission-critical military uses.

Another part of the proposal lays out requirements to guarantee that an especially powerful class of HFCs, known as HFC-23, is captured and destroyed. HFC-23 is a byproduct of making certain types of fluorinated gases. It’s believed to be 15,000 times more potent than carbon dioxide.

Finally, to make sure everyone plays by the rules, the EPA says it will create a “robust, agile, and innovative compliance and enforcement system.” 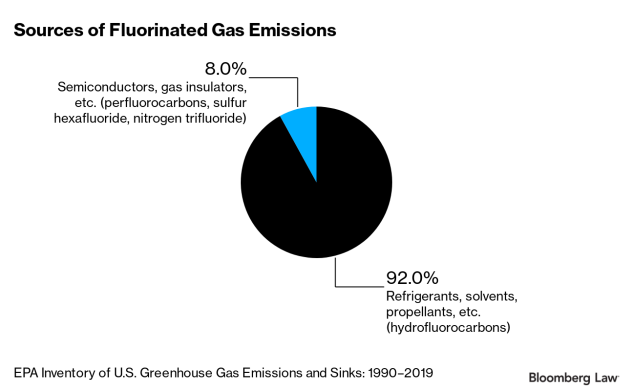 3. How much of a difference will that make?

A lot, according to the EPA, which shared several eye-popping projections on May 3.

The agency said that, in 2036 alone, the proposed rule will save the equivalent of 187 million metric tons of carbon dioxide emissions from going into the atmosphere. That’s roughly the same as the yearly carbon dioxide emissions from 47 coal-fired power plants, or the carbon sequestered by 229 million acres of forests in a year, according to an EPA online calculator.

From 2022 to 2050, the total reductions of the proposal will equate to 4.7 billion metric tons of carbon dioxide, or the same as all the emissions generated by the U.S. power sector in three years, the EPA said.

The EPA also said a global HFC phase-down could save the world up to 0.5 degrees of global warming by 2100.

4. Why is the EPA targeting HFCs first?

In part because Congress told it to.

Lawmakers tucked a bill known as the American Innovation and Manufacturing Act into the 2020 year-end funding package, and that bill requires the EPA to implement an 85% phasedown in the production and use of HFCs from 2011-2013 average levels by 2036. Those are the same goals laid out in the 2016 Kigali Amendment to the Montreal Protocol.

But even without direct orders from Congress, it’s likely the EPA would have taken a swing at regulating HFCs. Doing so fits with the Biden administration’s goal of cutting greenhouse gas pollution in half by 2030—which is why the EPA isn’t framing the American Innovation and Manufacturing Act as a bill mandating them to do something, but as a tool giving them congressionally-backed powers.

5. What will we use instead of HFCs?

Several companies are already switching to climate-friendly alternatives. Carrier and Chemours have come up with a refrigerant said to be one-fifth as damaging to the climate as the current chemical that Carrier uses in its residential and light commercial refrigeration systems. Honeywell, too, has spent hundreds of millions of dollars to develop next-generation refrigerants.

The type of chemicals that are used will depend on the application. For example, in industrial refrigeration, ammonia systems have been used successfully for years, according to the European Commission.

“American companies are on the forefront of developing the next generation of these refrigerants, so I’m sure they see it as an economic opportunity that can create jobs,” said Patrick Drupp, Sierra Club’s associate director of legislative and administrative advocacy.

The EPA’s proposal has to go through formal rulemaking. The agency has said it will hold a public hearing and wants to issue the rule in its final form later in the year.

Rulemaking often takes years from start to finish, but the EPA is on a tight schedule because the AIM Act mandates a final rule by Sept. 23. So the rulemaking is now a high priority, and the agency will have to work fast to get its work done.

Separately, the agency says it wants to set its 2022 HFC allowances by Oct. 1. President Joe Biden also said in a Jan. 27 executive order that he wants the Senate to ratify a U.S. entry into the Kigali treaty.

Though the EPA proposal has the same basic goals as Kigali, the U.S. joining would underscore the commitment to international leadership. It could ensure that China—which also isn’t in the agreement—follows through on its promise to join, Drupp said.