President ’s call for the federal government to stock up on electric vehicles is running headlong into two harsh realities: the marketplace and the bureaucracy.

The president, in an executive order aimed at combating climate change, requesteda plan by the end of April to add zero-emission vehicles to the government’s inventory. Yet from Inauguration Day until mid-March, the General Services Administration—the agency that does most of the government’s vehicle buying—spent $439.7 million on passenger vehicles, with only 13% going for products that use at least some electric power, according to Bloomberg Government’s federal contracts database.

That’s separate from the Postal Service, an independent agency, which signed a $6 billion contract with for a fleet of largely gas-guzzling mail-delivery trucks earlier this year. That move flew in the face of the president’s order that specifically directs the service to progress toward a zero-emission fleet. 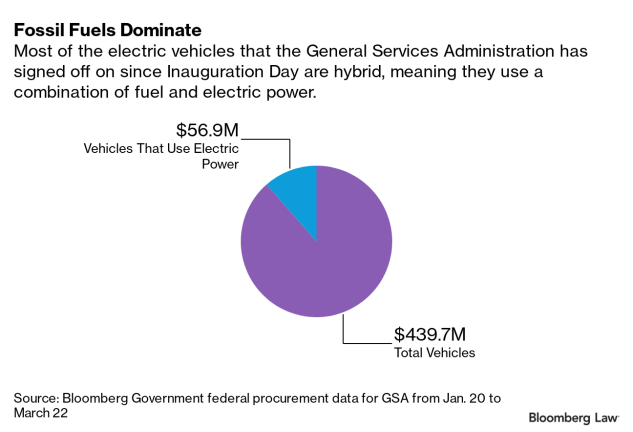 One potential reason: Trump administration officials likely lined up those purchases before leaving office, given that GSA typically signs vehicle contracts in the fall or winter. The Postal Service first started taking proposals for new designs in 2015.

But the government’s recent buys also reflect that the market currently offers few, if any, zero-emissions options to meet certain agencies’ needs, such as the Interior Department’s use of medium-duty trucks to carry equipment over dirt roads in remote areas.

“There is so much planning and management that has to go around moving people from using traditionally-powered cars or vehicles to a fully-electric vehicle,” said Jayna Marie Rust, an associate at Thompson Coburn LLP. You can’t “just switch midstream,” she said.

The federal government owns or leases more than 645,000 vehicles, according to a count last updated by GSA in 2019. GSA manages more than 224,000 of those vehicles, a fleet comparable in size to delivery giants or which in March signed on to buy 10,000 electric delivery vans from Arrival Ltd.

President made a similar green vehicle pledge during his presidency, though his directive included vehicles powered by fuels that aren’t necessarily zero-emission, such as an ethanol-gasoline blend. By 2019, 30% of the GSA’s fleet was composed of vehicles capable of running on E85 fuel.

GSA purchases of hybrid and electric models fell after that directive, and the administration learned it made more sense to buy cars with fuel-efficient conventional engines. Hybrids, plug-in hybrids, and fully electric vehicles composed 5% of the federal fleet in 2019, with pure EVs accounting for less than 1%, according to agency data.

The GSA in January asked companies to offer ideas about battery-powered and hydrogen fuel cell vehicles, along with how to charge them. Agency officials met with companies about the topics in mid-March, according to an agency notice, and said they plan to call for official proposals by the end of 2021.

Before they call for official proposals, they’ll need to resolve how to define Biden’s order.

The agency’s long-established definition of green vehicles is broad—it includes cars powered by fuels such as biodiesel, hydrogen, natural gas, electricity, or a combination. Only vehicles powered by batteries and plug-in charging will meet the president’s order to add zero-emission vehicles to the fleet.

The president also has said he wants the government to buy electric cars made in America by union workers. No such vehicles exist. 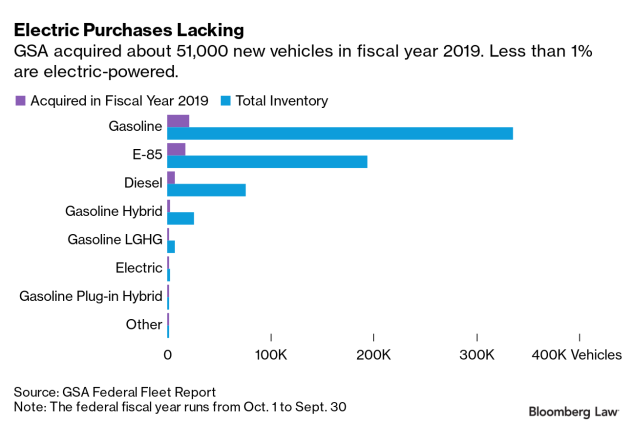 Civilian agencies that need cars, vans, ambulances, or trucks generally must pick from the GSA catalog, where the zero-emission choices include a four-door Leaf, the Chevrolet Bolt from . or, for agencies needing an SUV, Kona.

But more than 40% of the federal fleet consists of light trucks, the GSA spokeswoman said, and there are no electric versions of those on the market for the government to buy. The Interior Department uses ethanol-gasoline blends to power its trucks when practicable, a spokesman said in a statement, but there aren’t many all-electric medium- and heavy-duty vehicles on the market for the agency to use.

Major automakers such as ‘s Jeep brand, , GM, and Hyundai have pledged to increase their electric vehicle offerings in the next few years.

While cheaper to operate, clean-energy technology can cost more upfront. And that’s where fleet managers tend to focus, said Dorothy Robyn, a public policy scholar who led GSA’s real estate arm during the Obama administration. GSA will need to make it attractive for agencies to choose an electric option, she added.

Charging infrastructure is also an impediment to broader adoption of EVs in government fleets. An Energy Department guide on sustainability and federal vehicles, published in late 2020, said agencies should install charging stations at sites where a high concentration of plug-in cars will be parked.

“If you have 100 cars that all need to be charged and ready to go by 8 a.m., you’re probably not going to be able to rely on public chargers around town,” Rust said.

The Postal Service, operator of 225,000 vehicles, does its own buying. After the independent agency decided to buy mostly gasoline-powered trucks earlier this year, Postmaster General said that committing to a greater number of electric vehicles would be too expensive. The choice prompted House Democrats to introduce a resolution to halt the contract.

The federal government’s influence on the electric car market could be much more significant than its impact on the overall U.S. auto industry.

“It is going to really put a shot in the arm of this industry and industries that support electric vehicles” to meet the government’s needs, said Liza Craig, government contracting counsel at Reed Smith LLP.

The U.S. government bought about 51,000 vehicles, or 8% of the federal fleet, during fiscal year 2019, which runs from October 2018 through September 2019. That’s a fraction of the nearly 20 million new cars automakers sold in the U.S. in calendar year 2019, according to an industry trade group.

Sales of cars that use at least some electric power are much lower: automakers sold just 237,000 of those in 2019. GSA bought 167 electric vehicles during fiscal year 2019, according to agency records.

Depending on the vehicle type and source, GSA typically selects what cars and trucks to offer to agencies annually, an agency spokeswoman said by email. It typically requires an agency keep a new sedan for at least three years before replacing it.

But GSA accepts proposals for emerging auto technology on a rolling basis, making it easier for government car shoppers to make newer vehicles available to federal agencies when they hit the commercial marketplace, the spokeswoman said. 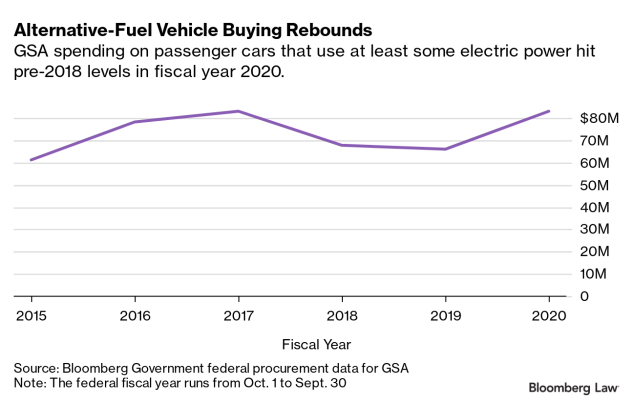 Any transition of the federal fleet to electric vehicles likely will be gradual, Robyn said.

Biden’s call to electrify the federal government’s fleet could give auto manufacturers enough certainty that they’ll invest in developing the technology, she said. The federal government can also collect data to help validate the technology, said Ben Prochazka, national director at the Electrification Coalition, a group that advocates for eliminating the country’s oil dependency.

“This is about using the federal government’s buying power to accelerate market developments that would otherwise play out more slowly,” she said.