President signed sweeping actions to combat climate change just hours after taking the oath of office, moving to rejoin the Paris accord and imposing a moratorium on oil leasing in the Arctic National Wildlife Refuge.

Environmentalists said Biden’s actions -- some of which could take years to be implemented -- renew the U.S. commitment to safeguarding the environment and signal to the world that America has returned to the global fight against climate change.

The moves mark a dramatic rebuke of President ’s pro-industry approach to energy and the environment. 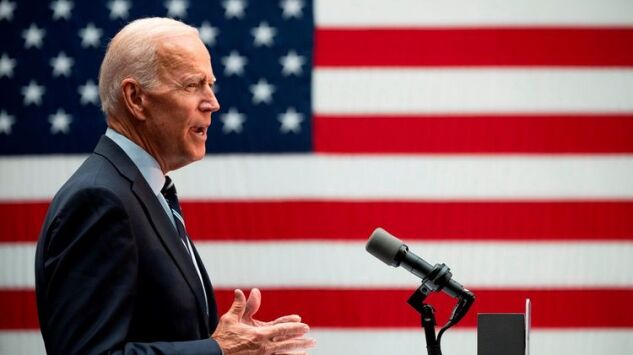 On Paris alone, Biden is directly reversing Trump’s decision to yank the U.S. from the accord. Trump labeled the pact “a total disaster” that would harm American competitiveness by enabling “a giant transfer of American wealth to foreign nations that are responsible for most of the world’s pollution.” 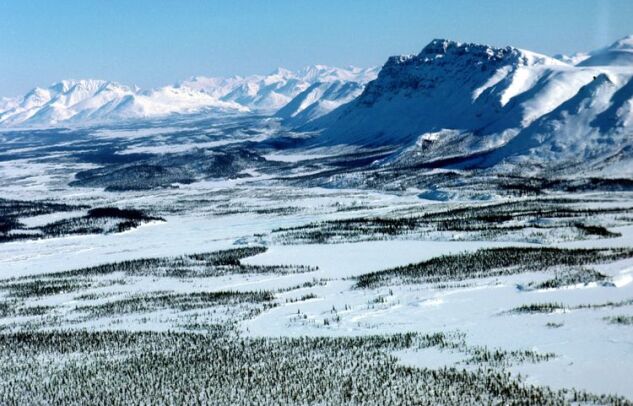 Biden notified the the U.S. is rejoining the Paris climate agreement before day’s end, with the re-entry set to take effect 30 days later.

“While we are grateful for this action, we also know this is only the start. We need our country to be fully powered by clean energy, and we must do it quickly and thoroughly,” said Andrea McGimsey, senior director for Environment America’s Global Warming Solutions campaign. “The days of dirty, fossil fuel-burning, 19th Century technology must be numbered in order to reach a cleaner tomorrow.”

Some of the moves drew opposition from industry and even one key Democrat. Senator , a Democrat from coal-rich West Virginia in line to chair the Energy and Natural Resources Committee, called for changes to the Paris accord.

“I agree that President Biden must renew America’s leadership on climate change through innovation,” Manchin said in a statement. “I also uphold my view that the Paris agreement must be improved to set all nations on the same stage and hold each to the same standards of accountability.”

In an executive order Wednesday, Biden directed agencies to review and address Trump-era policies “that were harmful to public health, damaging to the environment, unsupported by the best available science or otherwise not in the national interest,” according to a transition fact sheet. 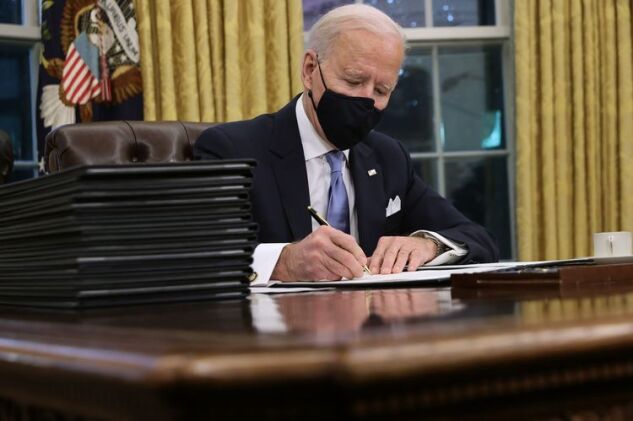 Joe Biden prepares to sign a series of executive orders in the Oval Office on Jan. 20.
Photographer: Chip Somodevilla/Getty Images

The review covers a breathtaking array of policies for possible repeal or revision, from automobile standards and appliance efficiency requirements eased under Trump to narrowed boundaries of national monuments in the western U.S.

Biden will also direct federal agencies to reconsider other Trump-era policies, including measures governing seismic oil surveys in the Gulf of Mexico, allowing roads to be built through Alaska’s Tongass National Forest and dialing back efficiency standards for appliances. Another target: a Trump rule narrowing the scope of government agency reviews of how their decisions affect the environment.

Other actions the Biden transition announced:

Like other Democrats on the campaign trail, Biden of his plans to restore the U.S. as a member of the 2015 accord and recommit the country to slashing greenhouse gas emissions. Still, environmentalists said his Day One move is essential to helping encourage greater global action to arrest the climate threat.

Under former President , the U.S. was a driving force behind the formation of the landmark Paris agreement. Now, the Biden administration can play a critical role setting more aggressive U.S. emissions-reductions targets and encouraging other countries to follow suit.

“Internationally there will be a expectation that the U.S. brings forward a new, ambitious target under the Paris agreement,” said , director of the ’s international climate initiative. “Internationally, it’s an important way of making clear the U.S. is going to take care of business at home.”

Under the Paris agreement, some 195 member countries set their own voluntary emissions-reduction targets, with the goal of keeping global temperature rise to below 2 degrees Celsius compared with pre-industrial levels. Under Obama, the U.S. had pledged to curb greenhouse gas emissions by 26%-28% below 2005 levels by 2025.

The World Resources Institute and other environmental groups have advocated a U.S. commitment to cutting greenhouse gas emissions by as much as 50% over the next decade. Achieving that would require a broad mix of domestic climate action, including more zero-emissions vehicles and rapid shifts in how the U.S. generates its electricity, with roughly 38% currently provided by natural gas.

Some activists are pushing even more rapid reductions before 2030. The U.S. Climate Action Network has advocated the U.S. cut its “fair share” of emissions by paring them 70% below 2005 levels by 2030 while helping developing countries stifle greenhouse gases too. The U.S. has an obligation to make reductions in line with its “historical responsibility for fueling the climate crisis,” said U.S. Climate Campaign Director Sriram Madhusoodanan.

Rejoining the Paris agreement “must be followed by bold and aggressive commitments and actions to both drastically cut U.S. emissions and help finance a just and equitable transition away from fossil fuels in parts of the world least responsible for the climate crisis,” Madhusoodanan said.

Those other efforts will take more time -- and be more challenging. While Biden could put the U.S. back in the Paris agreement with the stroke of a pen, other actions will require help from or lengthy rule-rewriting by his federal agencies.

The U.S. has some work to do rebuilding trust, WRI’s Waskow said.

“The U.S. has to come back the international stage with some humility,” Waskow said. The U.S. needs to “understand that its been out of the mix for the past four years and throwing obstacles in the path of progress.”