Biden at the White House on Wednesday.
Photographer: Sarah Silbiger/Bloomberg

President brought the U.S. back into the global fight against climate change on Thursday, pledging at an international summit he convened to halve emissions of greenhouse gases by 2030 and double climate aid to developing nations.

Poor countries made clear at the summit that they expect money from wealthier nations in exchange for accelerating their own efforts to curb warming, while China and India stuck to plans to continue growing their own carbon emissions before making any cuts, dismaying environmentalists who say the world remains on course toward catastrophe. 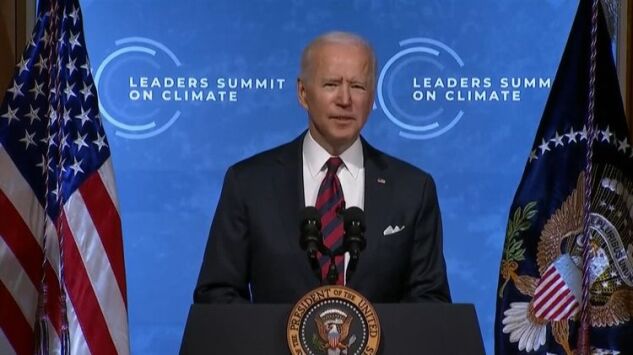 Biden announced in opening remarks for the two-day summit that the U.S. will reduce its greenhouse gas emissions 50%-52% from 2005 levels by the end of the decade -- significantly boosting a commitment made under former President that was scrapped by former President .

“No nation can solve this crisis on our own,” Biden said Thursday from the White House. “All of us, and particularly those of us who represent the world’s largest economies, we have to step up.”

The new U.S. pledge to curb emissions is aimed at encouraging industrializing countries including China, India and Brazil that account for much of the world’s carbon output to set their own aggressive emissions-reductions targets. But Biden faced a cool reception from leaders worried about committing to emissions cuts that could slow economic growth.

In their opening statements, the leaders of China and India kept to previously announced targets, and Brazil’s explicitly tied his country’s efforts -- including a pledge to curb deforestation -- to financial assistance from wealthier nations.

The new U.S. president is confronting overseas skeptics who have watched American climate policy shift dramatically depending on the occupant of the and wonder whether the latest promises can be trusted.

Biden’s pledge would require changes that would touch the lives of nearly every American. But Republicans in are unlikely to support legislation that would make major reductions in U.S. emissions, for example by penalizing fossil fuel use or mandating renewable power, and any regulations Biden’s administration issues are sure to face challenges from industry.

“Scientists tell us that this is the decisive decade,” Biden said at the summit. “This is the decade we must make decisions that will avoid the worst consequences of the climate crisis. We must try to keep the earth’s temperature to an increase of 1.5 degrees Celsius.”

All 40 of the leaders invited, from British Prime Minister to Chinese President and Russian President , agreed to attend and speak. Other participants include , members of indigenous groups from around the world, and current and former corporate executives including and , founder and majority owner of Bloomberg News parent company .

“We are at the verge of the abyss,” UN General Secretary-General said after Biden, describing the planet as “racing” toward a 1.5-degree increase in average temperatures.

Bolsonaro said his country is committed to eliminating illegal deforestation by 2030, allowing a reduction in carbon dioxide emission. Deforestation has been a persistent problem in the Brazilian Amazon.

But Bolsonaro cautioned that “there must be fair payment for the environmental services provided by our biomes to the planet at large as a way to recognize the economic nature of environmental conservation activities.”

Australian Prime Minister sidestepped his country’s role as a major coal producer and focused instead on its efforts to produce new technologies to fight climate change. He announced $1.5 billion in climate financing focusing on the Pacific region. 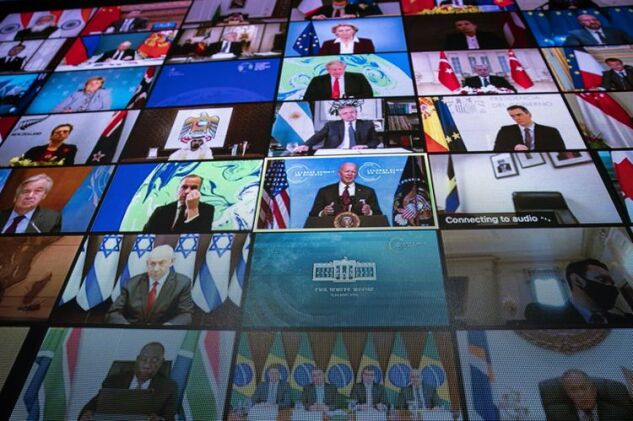 Comparing countries’ varying commitments to cut emissions is nearly impossible because there is no international agreement on calculating the figures. To reach accord in the Paris agreement, for example, countries were allowed to each set voluntary goals, choosing their own baselines and end-dates, without coordination.

Biden’s target is intended to put the U.S. on track to reach net-zero emissions by 2050. Biden has frequently highlighted that goal -- a point where the greenhouse gases added to the atmosphere by the U.S. are completely offset by reductions.

The 50%-52% pledge was based on an analysis of the potential for different sectors of the economy to pare greenhouse gases, according to administration officials. The Biden administration opted not to make an explicit commitment to pare emissions of methane as part of the pledge, despite entreaties from environmentalists. 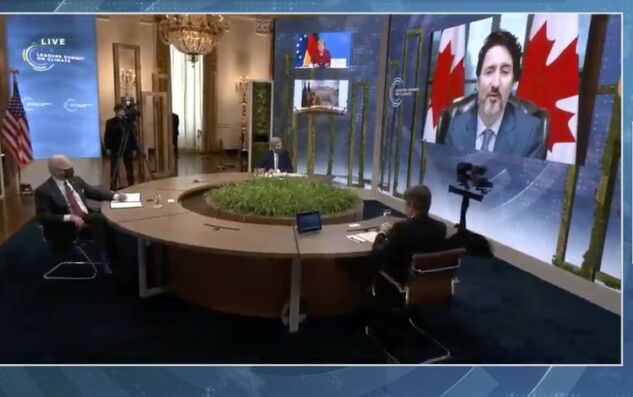 China reiterated previous plans to peak carbon emissions by 2030 and to attain net-zero status by 2060. While that wasn’t new, Xi also pledged to reduce coal consumption between 2026 and 2030.

Ahead of the summit, former Secretary of State , Biden’s special presidential envoy for climate, offered some praise for Beijing’s plans.

“Obviously we have differences with China on certain issues, and climate has to be treated separately,” Kerry said, referring to rifts on trade and human rights, among other issues. “They didn’t just talk about plateauing or peaking, they have now agreed there must be actions between 2020 and 2030.”

The current goals laid out by China and India are not aggressive enough to keep global temperature increase below 2 degrees Celsius, according to .

Russia’s Putin reiterated a goal he announced in his annual state-of-the-nation address on Wednesday: that the cumulative volume of the country’s net emissions should be less than those of the European Union over the next three decades. Analysts are skeptical Putin’s goal will amount to a real policy change, noting Russia’s emphasis on continuing to extract fossil fuels from the Arctic.

“It is no secret that the conditions that facilitated global warming and associated problems go way back,” Putin said at the summit. “Carbon dioxide can stay in the atmosphere for hundreds of years. So it’s not enough to tackle the issue of new emissions. It is also important to take up the task of absorbing the CO2 that has accumulated in the atmosphere.”

Russia, he stressed, “makes a gigantic contribution to absorbing global emissions, both ours and from elsewhere.”

But none of the pledges by any nation are binding, and meeting the most ambitious targets will require dramatic changes in the way the world generates and uses energy. It would also require emissions reductions from hard-to-decarbonize sectors of the economy, from cement-making to agriculture.

“Targets, on their own, won’t lead to emissions cuts,” said Kate Blagojevic, the head of climate issues for Greenpeace UK. “That takes real policy and money. And that’s where the whole world is still way off course.”

Environmentalists argue Biden’s planned emissions reduction is both achievable and ambitious -- a sweet spot essential to . However, fulfilling the commitment still depends on a slew of yet-to-be-written environmental regulations that can be ripped up by future presidents, Biden’s multitrillion-dollar infrastructure package that faces stiff opposition in Congress and a rapid transformation of the U.S. electrical sector.

Biden’s efforts come after Trump pulled the U.S. back from the climate fight. He withdrew from the Paris Agreement on climate and his administration systematically dialed back Obama-era climate policies, including efficiency standards to curb electricity use and rules cutting greenhouse gas emissions from power plants, automobiles and oil wells.

Yet Biden also faces concerns within his own domestic political base as he tries to navigate competing pressures from Senator , a Democrat from coal-rich West Virginia, and progressives such as Representative and the Sunrise Movement.

On the eve of the summit, Sunrise’s political director, Evan Weber, took a swipe at Biden’s planned emissions cut, arguing that a 50% reduction falls far short of what the U.S. needs to do as “the richest country in the world and the biggest historical polluter.”

“The science is clear – if the U.S. does not achieve much, much more by the end of this decade, it will be a death sentence for our generation and the billions of people at the front lines of the climate crisis in the U.S. and abroad,” Weber said in a statement.

The Biden administration is building its target on a foundation of domestic climate programs and policies, including investments in renewable power and electric vehicles as well as regulations throttling greenhouse gas emissions from power plants, oil wells and automobiles.

Still, there are technical and economic barriers. To meet its commitment, the U.S. would need to curtail emissions from across all reaches of its economy, including the energy, transportation and industrial sectors. The country would have to rapidly scale up renewable power, shift more of the nation’s vehicles to zero-emitting electric varieties and quickly deploy carbon-capture technology at manufacturing facilities.

Oil industry advocates, including Republicans on Capitol Hill, have already panned Biden’s expected pledge as too aggressive, with Senator , a Republican from Wyoming, describing it as a “punishing” target that “will cost working families a fortune in higher energy bills” while harming America’s competitiveness.