brings a resume that could make her the most conservative new justice since and a dream addition for Republicans looking to remake the .

Barrett, nominated Saturday by President , champions the “originalist” approach that has become conservative orthodoxy for interpreting the text of the Constitution. She is an acolyte of the late Justice . She has deep Catholic convictions and has said that life begins at conception. Only 48, she could serve for more than 30 years.

And should she win Senate confirmation to succeed the late Justice as expected, Barrett could bring about the biggest legal shift in decades. Her vote would make the Supreme Court under Chief Justice more likely to overturn Obamacare, disable federal regulatory agencies and expand gun rights. She might even give conservatives their long-pursued goal of toppling the 1973 Roe v. Wade abortion-rights ruling.

Speaking in the White House Rose Garden after being introduced by Trump, she vowed to try to emulate Scalia, for whom she clerked in the court’s 1998-99 term.

“His judicial philosophy is mine too,” Barrett said. “A judge must apply the law as written. Judges are not policy makers and they must be resolute in setting aside any policy views they might hold.” 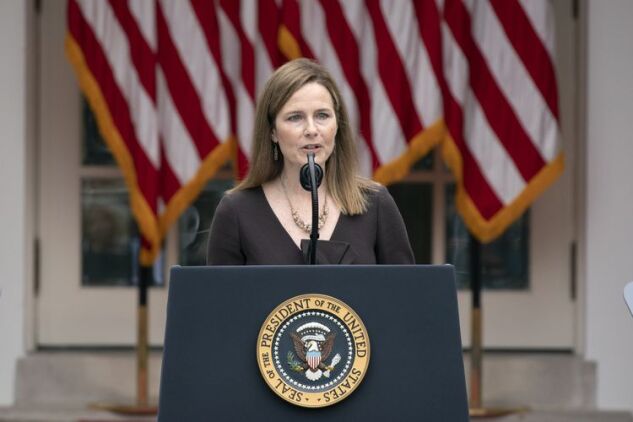 Amy Coney Barrett speaks during an announcement ceremony in the Rose Garden of the White House on Sept. 26.
Photographer: Stefani Reynolds/Bloomberg

Barrett rates as more conservative than either of Trump’s first two nominees, and , according to a predictive scale developed by academics led Lee Epstein, a law professor and political scientist at Washington University in St. Louis. Both justices have been generally reliable votes for Trump and conservative causes, though Gorsuch disappointed many of his backers in June with his majority opinion extending federal anti-discrimination law to protect LGBTQ workers.

Although other Supreme Court justices have disappointed supporters in the past, Barrett brings an especially strong set of credentials, including at least nine appearances since 2014 at events sponsored by the conservative .

“She is a rock-solid conservative,” said Mike Davis, founder of the Article III Project, which advocates for Trump’s judicial selections. “With the appointment of a Justice Barrett as his third Supreme Court pick, President Trump will transform the 5-4 John Roberts court to the 6-3 Clarence Thomas court.”

Her academic work suggests she would be more willing to throw out precedents than Scalia, the conservative icon for whom she once clerked, said , director of the Robert A. Levy Center for Constitutional Studies at the libertarian .

“You can tell in her writings that she loved the man and she agrees generally with his approach to the law,” Shapiro said. “But she’s a little more willing than he was, I think, at least if you’re a Supreme Court justice, to question precedent.”

Scalia was less inclined to toss out past Supreme Court rulings than his colleague Thomas, who was confirmed in 1991. Barrett would probably fall between those two in her adherence to precedent, Shapiro said.

Her record suggests she would be even more supportive of gun rights than Scalia, who wrote the landmark 2008 decision that said the Second Amendment protects individual freedoms, says , a UCLA Law School professor who specializes in that subject. He says Barrett probably would vote to strike down “red flag” laws designed to temporarily take firearms away from dangerous people.

Barrett “is likely to have a huge impact on America’s gun policy if she is appointed to the Supreme Court,” Winkler tweeted this week.

She has voiced skepticism about the Affordable Care Act, also known as Obamacare. In a 2017 law review article, she criticized Roberts’ opinion upholding the law as pushing the text “beyond its plausible meaning.” The Supreme Court will take up a new constitutional challenge to the health-care law a week after the election.

One of Barrett’s home-state senators, Republican , contrasted her with Roberts, a Republican appointee who also cast key votes to preserve the DACA deferred-deportation program and block Trump from adding a citizenship question to the 2020 census.

“One reason I’m excited about Amy is the fact that I don’t see her as being a drifter, that she’ll get in there and start moving to the center and left,” Braun said. “She’s a constitutionalist and has a good conservative heritage.”

Barrett grew up in a New Orleans suburb and attended a Catholic girls’ high school before graduating from in Memphis, Tennessee, and Notre Dame Law School in South Bend, Indiana. She clerked for conservative Washington federal appeals court judge before Scalia. She returned to Notre Dame as a professor in 2002 and taught there full-time until Trump appointed her to the federal appeals court in Chicago in 2017.

She and her husband, Jesse Barrett, a federal prosecutor, have seven children, including two adopted from Haiti and a son with Down syndrome.

Religion plays a central role in her life. In a 2006 Notre Dame Law School commencement speech, Barrett urged graduates to direct their legal careers toward “building the Kingdom of God.”

Barrett has served as a trustee of a school run by a small Christian group called People of Praise that combines Catholic teachings with Pentecostal beliefs such as prophecy and speaking in tongues. Until recently the group called women in leadership roles “handmaids,” leading some left-wing critics to compare it to the oppressive regime in the novel and television series “The Handmaid’s Tale.”

Such comparisons have drawn rebukes from Barrett’s supporters, some of whom point to Barrett’s career and accomplishments as evidence of her independence.

“Here in South Bend, everybody knows People of Praise,” said Carter Snead, a colleague of Barrett’s at Notre Dame. “It’s just a group of really nice folks. The idea that there’s something sinister about it is really funny when you think about who these folks actually are.”

Liberals have expressed concern that Barrett will let her religious beliefs guide her judging. At her 2017 appeals court confirmation hearing, Democratic Senator told Barrett that “the dogma lives loudly within you.”

Barrett said she wouldn’t let her personal beliefs interfere with her legal analysis, and many religious conservatives took affront at the senator’s remark. They subsequently appropriated Feinstein’s words as a rallying cry, plastering them on T-shirts and coffee mugs.

“There’s no indication that as a devout Catholic she would let that personal aspect of her life overtake her judicial decision-making any more than” Scalia and Thomas, said Steven Aden, chief legal officer at , which urged Trump to nominate Barrett.

At the White House, Barrett said she would do her work on the Supreme Court impartially.

“If confirmed, I would not assume that role for the sake of those in my own circle and certainly not of my own sake,” she said. “I would assume this role to serve you.”

Barrett made her personal opposition to abortion clear in a 1998 law review article about Catholicism and judging. She wrote that abortion and euthanasia “take away innocent life” and that abortion is “always immoral.”

As a judge, she signed on to an opinion that suggested support for an Indiana requirement that clinics bury or cremate fetal remains and a separate Indiana ban on abortions based on the fetus’s race, gender or risk of a genetic disorder such as Down syndrome. Barrett supported granting a new hearing to state officials after a three-judge panel struck the laws down.

The Supreme Court later revived the fetal-remains law without hearing argument -- backing Barrett’s position on that issue -- but refused to hear Indiana’s bid to reinstate the selective-abortion law.

“She clearly is the dream candidate for conservatives who are focused on abortion,” said Elizabeth Sepper, a law professor at the University of Texas at Austin.

But , a Case Western Reserve University law professor who is friendly with Barrett, says no one should assume she will vote to overturn Roe. In a 2013 speech, she expressed doubt that the decision would ever be overturned and said the fight over abortion was increasingly focused on whether taxpayer funds should be used to subsidize procedures.

“She thinks Roe was incorrectly decided as an original matter,” Adler said. “But that’s different from the question of whether or not it should be overturned.”

(Updates with comments from Barrett, Trump starting in fifth paragraph)