The underground coal mine in sparsely populated Gunnison County releases tons of the ozone-forming compounds each year along with methane, according to the reports. VOCs react with sunlight to create ground-level ozone. The state says it’s difficult to estimate the emissions, while environmentalists say the excessive levels warrant enforcement.

Mining companies such as Peabody Energy and Alpha Natural Resources are closely watching what happens at West Elk, since it could have ramifications nationwide for Clean Air Act permitting requirements at other underground coal mines with large methane emissions.

West Elk, operated by Arch subsidiary Mountain Coal Co. LLC, is the largest single industrial source of methane in Colorado. Methane from coal mines is not regulated in Colorado, but VOCs are.

State and federal agencies have the regulatory authority to enforce air laws at the facility, but are not doing so because of pressure from the coal mining industry, environmentalists told Bloomberg Environment.

“They’re just choosing not to,” Ted Zukoski, staff attorney with Earthjustice in Denver, told Bloomberg Environment. “If mines are over the limit, then they ought to be reporting.”

State officials say the difficulty in estimating coal mine VOC emissions—as well as uncertainty over whether such emissions are “fugitive” or come from point sources—are the primary reasons Air Pollution Control Division regulators have decided not to enforce against West Elk, even after an inspector twice flagged the facility for being out of compliance.

“There’s a lot of debate in states about whether and how to regulate this, and we’re lacking guidance from the EPA,” John Swartout, senior policy adviser to Gov. John Hickenlooper (D), told Bloomberg BNA. “To say the mining association has all this influence—that’s bogus.”

Stan Dempsey, president of the Colorado Mining Association, said the governor and regulatory agency made independent decisions. “I don’t believe this governor or his regulatory agencies are in a position to be pressured,” he said.

Company spokeswoman Logan Bonacorsi did not respond to more than a dozen requests for comment from Bloomberg Environment.

As part of a royalty rate reduction sought by Mountain Coal and approved Sept. 29 by the Bureau of Land Management, the company committed to developing ways to capture and use the methane.

Hickenlooper supported the request for the reduction, which will result in a $4 million revenue loss to the state over the course of five years. He conditioned his support on the company’s commitment for addressing the methane currently being vented at the mine.

Bloomberg Environment examined reports from every inspection from 2012 to 2015 of the six mines that were operating in the state in that time frame. Mines are inspected every three years to check compliance with air regulations and permit conditions.

When permitting violations of VOC emission levels were cited against two mines in the North Fork Coal Mining area, West Elk and Elk Creek, the division decided not to enforce.

Elk Creek, which sits across the road about a mile and half west of West Elk, is owned by Oxbow Mining, a subsidiary of Koch-controlled Oxbow Carbon LLC. The facility ceased mining operations in late 2013 after a fire and a partial collapse made work there too dangerous and costly. It now uses 100 percent of its methane to generate electric power and heat, or flares it, reducing the VOCs along with methane, according to the EPA’s Coalbed Methane outreach program.

West Elk’s VOC emissions were shown to be above air pollutant emission notice (APEN) reporting thresholds from multiple ventilation points at the mine in inspections in both 2012 and 2015. An inspector cited the company for not submitting the proper modification to its facility-wide permit to include VOC emissions.

“Enforcement discretion is not recommended regarding the VOC APEN violation,” said the report from the 2015 inspection, submitted by division inspector Ben Cappa. But the state decided not to pursue.

Martha Rudolph, director of environmental programs in the Colorado Department of Public Health and Environment, said an inspection is “a snapshot in time.”

For the industry, a requirement to reduce VOC emissions from gassy mines would be an added expense. 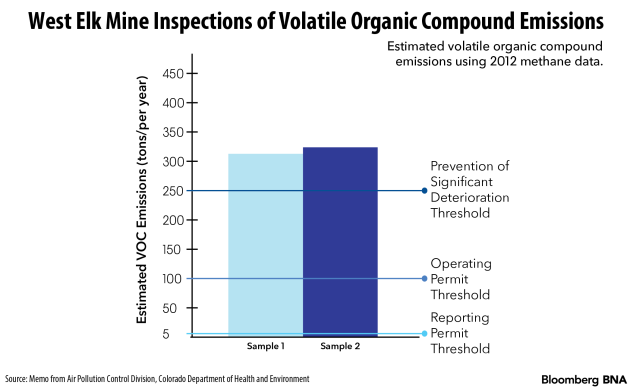 West Elk emitted 408,471 metric tons of carbon dioxide equivalent in 2016, according to data the company reported to the EPA’s Greenhouse Gas Inventory. The vented gas stream from the mine also contains volatile organic compounds such as benzene, propane, hexane and xylene, according to WildEarth Guardians, citing a report on sampling of gases from the mine.

VOCs can cause eye, nose and throat irritation, headaches, loss of coordination and nausea, and liver, kidney and central nervous system damage. Some components, such as benzene, are carcinogenic.

These compounds often occur with methane, ethane and other gases in geologic formations that yield coal, oil and natural gas. The gases are vented for safety inside the mine.

Outside, the VOCs and methane could be burned. Combustion converts VOCs into carbon dioxide and water. Undesirable byproducts can result, including noise, smoke, sulfur oxides, nitrogen oxides, and carbon monoxide, but they can be minimized with proper design, the EPA said.

Jeremy Nichols, climate and energy program director with WildEarth Guardians, said his group, the Sierra Club’s Environmental Law Program, and Earthjustice have been urging state and federal regulators to enforce Clean Air Act permitting requirements for VOCs at West Elk and other mines for nearly 10 years.

The Sierra Club has received funding from Bloomberg Philanthropies, the charitable organization founded by Michael Bloomberg, the majority owner of Bloomberg L.P., parent of Bloomberg BNA, which includes Bloomberg Environment.

There is no guidance from the EPA on air permitting for VOCs from underground coal mines, an EPA spokesperson said.

The EPA received a letter in 2012 from states seeking that guidance. Since then, the administration has worked with states and the industry to determine how VOC permitting requirements would apply to underground coal mines, the agency told Bloomberg Environment.

Neither the EPA nor the states have determined whether VOCs from the mines are point source (from a single identifiable source) or fugitive (those that don’t pass through a vent or similar opening), Rudolph said.

Zukoski of Earthjustice said that West Elk’s venting, using drilled holes and pipes, is “the definition of point-source.”

Rudolph, the Colorado environmental programs director, however, told Bloomberg Environment there is a debate about how to calculate the quantity of VOCs. “So there’s a number of issues to be addressed, and we’re still working on it,” she said.

In a Jan. 11 letter to a Mountain Coal official, Rudolph said division management had decided not to take final action on the conclusions reached in recent inspection reports because of “potential technical challenges in collecting meaningful emissions data.”

“We have been working with you and with others, including the Colorado Mining Association, to talk through the unique issues related to gathering information on VOC emissions from mining facilities,” Rudolph wrote.

Because the volume of gas from West Elk and similarly gassy coal mines is very large, the total VOC emissions are likely significant and could trigger Clean Air Act permitting, reporting or prevention of significant deterioration requirements, according to inspection reports.

Estimates of the amount of VOCs vented from West Elk were based upon testing data collected by an energy services company hired by Mountain Coal Co. to prepare a report requested by the BLM in March 2009. The deputy state director of the Colorado State Office of the BLM asked Mountain Coal to conduct an economic evaluation of options for addressing coal mine methane.

During that study samples taken from two methane drainage wells detected the presence of propane, n-butane, i-pentane, n-pentane and hexane, along with other compounds.

Applying a VOC-to-methane ratio from the samples, the state inspector calculated that VOC emissions in 2012 and 2015 at West Elk could be as high as 312.2 tons to 321.8 tons per year. The threshold for reporting under the Colorado Air Pollutant Emission Notice program is two tons year and the permitting threshold is five tons per year. At more than 100 tons per year, emissions exceed the threshold for a Clean Air Act Title V operating permit, according to state requirements.

In 2012 environmental groups sent a letter to the Air Pollution Control Division urging regulators to begin investigating unreported coal mine VOC emissions based on the 2009 estimates from the two methane drainage wells at West Elk. The letter listed several other Colorado mines as likely sources of VOC emissions above the reporting threshold.

The Colorado Department of Health and Environment asked the mines to quantify their emissions of VOCs and sulfur compounds, according to Airtech Environmental Services, Inc., a Denver company that offered to help the mines gather the data.

Airtech, now owned by Montrose Air Quality Services LLC, assisted some of the mines in May 2013 and completed a report for at least one mine.

The mines never provided VOC emissions data, according to a confidential memo from the state, Air Pollution Control Division obtained by Bloomberg Environment.

On May 13, 2013, the mining association met with the governor’s office to discuss the air division’s requests. Eight days later, the division was directed to hold the request letters in abeyance, according to the memo.

“We thought we were going to get some business out of it, but it was a state requirement that went away,” Timothy Wojtach, a client project manager at Montrose, said.

(Corrects in 21st paragraph that WildEarth Guardians was the source of the information about the contents of the gas stream.)

To contact the reporter on this story: Tripp Baltz in Denver at abaltz@bna.com