President said he’ll nominate Judge for the Supreme Court, moving to add his third justice to the bench and a fresh jolt to his faltering campaign just weeks before Americans vote on whether to give him a second term.

If confirmed by the Senate, Barrett, known to be a devout Catholic who considers abortion “always immoral,” would fill the seat vacated by the death of Justice . The loss of liberal icon Ginsburg and the confirmation of the conservative Barrett, 48, could cement the court’s rightward shift for a generation.

“Today it is my honor to nominate one of our nation’s most brilliant and gifted legal minds to the Supreme Court, Judge Amy Coney Barrett,” Trump said during a White House ceremony on Saturday. “Barrett is a woman of remarkable intellect and character. She is eminently qualified for the job.”

Barrett, speaking at the ceremony, paid respect to Ginsburg, saying the late justice “not only broke glass ceilings, she smashed them.”

“I fully understand that this is a momentous decision for a president and if the Senate does me the honor of confirming me, I pledge to discharge the responsibilities of this job to the very best of my ability,” Barrett said. “Should I be confirmed, I will be mindful of who came before me.”

The nomination sets up a bitter clash in the Senate, where Republicans have vowed to use their majority to rapidly push through a confirmation vote before the Nov. 3 election. The plan has angered Democrats, who point to Majority Leader ’s refusal to consider ’s nomination to fill a vacant seat during the 2016 election year. 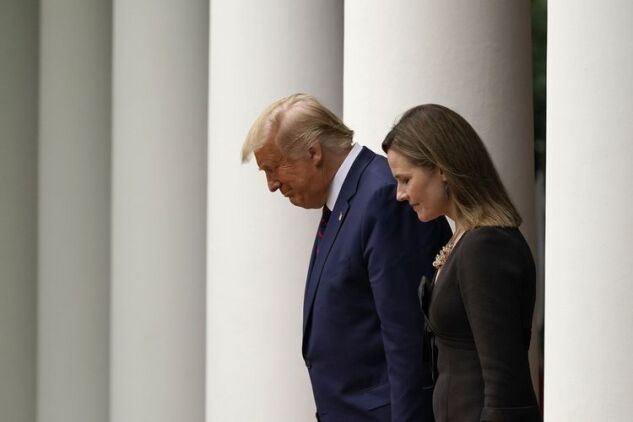 President Donald Trump walks with Judge Amy Coney Barrett to a news conference to announce Barrett as his nominee to the Supreme Court, at the White House on Sept. 26.
Photographer: Alex Brandon/AP Photo

But there’s little Democrats can do to delay a vote on Barrett, an acolyte and former clerk for the late Justice , the high court’s former conservative standard-bearer. And her appointment will undoubtedly play a dominant role in the final weeks of the presidential election. Democratic candidate has said the winner of the presidential contest should fill Ginsburg’s seat.

The Senate Judiciary Committee plans to start Barrett’s confirmation on Oct. 12, Senator , chair of the committee, said on Fox News. Barrett would face questioning for the next two days, then senators would hear from outside witnesses on Oct. 15.

“I expect they will challenge Judge Barrett about the law, and I’ll expect they will ask her questions about her faith and does that influence her decision making,” said Graham, who has spoken with Barrett. “I expect her to be confirmed” and “I hope to get her out of the Committee by the 26th of October.”

A full Senate vote is tentatively planned for the week of Oct. 26 -- the week before the election.

“I think it’s going to go quickly, I hope,” Trump told reporters as he departed the White House for a campaign rally in Pennsylvania after the announcement. “We don’t have to do it before. But I think this will be done before the election.”

McConnell plans to meet with Barrett on Tuesday, a person familiar with the matter said.

The decision to move ahead with the nomination is contentious; polls, including from the New York Times/Siena College on Sunday, show a majority of voters believe the next president should decide who should fill Ginsburg’s seat.

Barrett, a graduate of Notre Dame Law School, would join Trump’s other two Supreme Court appointees, and , both of whom are in their 50s. Together, they will potentially form a third of the high court for decades to come.

“One reason I’m excited about Amy is the fact that I don’t see her as being a drifter, that she’ll get in there and start moving to the center and left,” Senator , an Indiana Republican, said in an interview. “She’s a constitutionalist and has a good conservative heritage.”

“Pro-life is going to have a defender in Amy,” Braun added.

Trump told allies that he decided to appoint her after his first interview with Barrett, a person familiar with the matter said.

As a judge on the Seventh Circuit Court of Appeals, Barrett wrote a decision that makes it easier for students accused of sexual assault to sue universities for how they handled their cases.

She joined an opinion that suggested support for two Indiana abortion laws: a requirement that clinics bury or cremate fetal remains, and a separate ban on abortions based on the fetus’s race, gender or risk of a genetic disorder such as Down syndrome. Barrett said the full Seventh Circuit should have reconsidered part of a three-judge panel’s decision to strike down the two measures.

The Supreme Court later revived the fetal-remains provision but refused to hear Indiana’s bid to reinstate the second law.

“Amy Coney Barrett will decide cases based on the text of the Constitution as written,” Trump said.

Speaking later as he left the White House for a rally in Pennsylvania, Trump said he never discussed the issue of abortion with Barrett before selecting her.

, co-chair of the conservative Federalist Society, praised Trump’s selection of Barrett, calling her an “exceptionally qualified” judge, who will “not bend to political pressures or personal preferences.”

Biden has made the threat a conservative court poses to Obamacare the centerpiece of his argument against replacing Ginsburg before the election. He noted in a statement that Barrett has “a written track record of disagreeing with the U.S. Supreme Court’s decision upholding the Affordable Care Act,” as Obamacare is officially known.

, who will play dual roles in the confirmation with her seat on the Senate Judiciary Committee and as Biden’s running mate, issued her own statement Saturday noting that she had visited Ginsburg while the justice lay in state at the Capitol.

“It would be a travesty to replace her with a justice who is being selected to undo her legacy and erase everything she did for our country,” Harris said.

The White House has pushed for swift confirmation of Barrett before Election Day, circulating a memo to supporters late Friday with details of past confirmations and making the argument there is plenty of time to put her on the court before Nov. 3.

The Trump campaign issued a statement after Trump’s announcement highlighting bipartisan support for her confirmation to the appeals court. She received the votes of three Democrats -- of West Virginia, of Virginia and of Indiana, who subsequently lost re-election to Braun.

Trump has said he wants nine justices in place in case the high court resolves a legal dispute over who won the presidential election, arguing without substantiation that expanded mail-in voting will result in widespread fraud.

The comments prompted condemnation from Democrats who argued Trump is abusing his power. Senate Democrats have said they will push Trump’s nominee to commit to recuse herself if the court hears a case on the election result, CNN reported.

Trump’s move to fill Ginsburg’s seat has energized liberals, who have already poured about $300 million into the Democratic Party’s ActBlue fundraising platform since the Sept. 18 death of the late justice, a feminist icon and fierce advocate for women’s rights. They see Barrett’s appointment possibly putting the Roe v. Wade abortion-rights decision in jeopardy, and increasing the likelihood of conservative wins in cases on affirmative action, immigration, gun rights and Obamacare.

Republicans in Washington believe the Supreme Court fight could provide a spark to the president’s flagging re-election campaign, helping turn attention away from widespread criticism of his handling of the coronavirus pandemic. Trump and Republicans are highlighting Barrett’s biography as a mother of seven from Indiana and law school professor, traits they believe could appeal to voters in Midwestern battleground states.

Trump called on lawmakers to conduct “the respectful and dignified hearing that she deserves” and “to refrain from personal or partisan attacks.”

“The stakes for our country are incredibly high,” Trump said.

Democrats have vowed to oppose Barrett’s nomination but lack the power to block it without at least four Republicans joining them. Some Democrats have warned of drastic steps if Trump fills Ginsburg’s seat, including packing the Supreme Court with additional justices in order to narrow its ideological divide.

Barrett endured a tough confirmation battle in 2017, when the Senate confirmed her to the Seventh Circuit with a 55-43 vote, including the three Democrats. But the process endeared her to conservatives.

Senator , the top Democrat on the Judiciary Committee, grilled her on whether her Catholic faith would unduly influence her judicial rulings. The comments drew accusations from conservatives that Feinstein was attempting to impose a religious test on Barrett.

“The conclusion one draws is that the dogma lives loudly within you, and that’s of concern when you come to big issues that large numbers of people have fought for years in this country,” Feinstein told Barrett.

Barrett’s past writings and remarks on the intersection of faith and the law could again become a flash point, raising questions about whether she would overturn Supreme Court precedents on abortion rights.

“Your legal career is but a means to an end,” Barrett told Notre Dame law graduates in 2006. “That end is building the kingdom of God.”

She wrote in a 2013 law review article that judges should not necessarily be bound by precedent when considering whether to overturn major decisions that conflict with their view of the Constitution.

But Barrett said during her 2017 confirmation hearing for the appeals court that she would “follow all Supreme Court precedent without fail.”

“I would never impose my own personal convictions upon the law,” she said.

Republicans appeared to garner to move forward with Barrett’s nomination in the Senate, even before Trump officially announced her as the nominee. Only Republican Senators of Alaska and of Maine have said they oppose an election-year vote on a high court opening. Other GOP senators have lined up behind Trump and McConnell, including several facing tough re-election fights in November. Murkowski later weakened her stance, saying she remained open to confirming Trump’s nominee.

Trump considered picking Barrett in 2018 to replace retired Justice , but instead chose Kavanaugh. Disappointed supporters of Barrett were told by the White House at the time she would be considered for the next opening, people familiar with the conversations said.

The only candidate who attracted serious interest inside the White House other than Barrett was , a Trump-appointed judge on the . Lagoa, a Cuban-American from Florida, would have been the second Hispanic woman appointed to the Supreme Court. Trump has repeatedly suggested that nominating her might help him win the crucial swing state in November, but said Thursday he had not met with her in person.

(An earlier version corrected the spelling of Lindsey Graham.)

(Updates with poll on filling seat in 13th paragraph.)