Utility workers cutting trees to help repair an electrical line in Barrio Nuevo in Puerto Rico. The area has been without power since Hurricane Irma hit the island in September 2017.
Photographer: Rebecca Kern/Bloomberg Environment

Heriberto Vazquez greets you with a wide grin. You would never know that he, his wife and 7-year-old niece have been living without power for more than eight months after Hurricane Irma knocked their power lines down.

What keeps him smiling? His latest purchases at Home Depot and Sam’s Club: A solar panel, a power inverter, and a generator that provides three to four hours of electricity to power a small television and lamp at night, he told Bloomberg Environment.

Vazquez’s house in the mountainous Barrio Nuevo neighborhood of Bayamon, about 20 miles outside of San Juan, is one of approximately 20,000 homes and businesses waiting on power from the island’s government-owned utility, the Puerto Rico Electric Power Authority, or PREPA.

And he’s not the only one turning to solar power as a solution since hurricanes Irma and Maria destroyed 80 percent of the island’s transmission and distribution system: Solar and battery companies in Puerto Rico say they have seen more demand for their products since the storms. 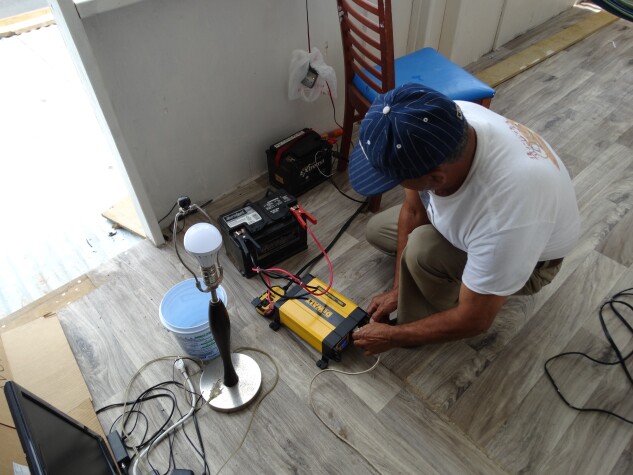 Heriberto Vazquez, a resident of Barrio Nuevo in Puerto Rico, connects his solar panels’ energy to a generator, which power his light and television. Vazquez has been without power since Hurricane Irma hit the island in September 2017.
Photographer: Rebecca Kern/Bloomberg Environment

Currently, renewables make up just 1.1 percent of Puerto Rico’s electric grid. The rest comes from burning oil, natural gas, and coal. The biggest challenge to integrating solar is redesigning a centralized system built in the 1950s.

But solar has strong backing from PREPA’s CEO Walter Higgins, who took over the public utility in March.

“The great breakthrough that’s going on is not solar, although it’s getting cheaper all the time, it’s now batteries that can store the intermittency of the solar energy, and make it usable when it’s not there all the time,” he told Bloomberg Environment.

“How does that system look for the future? I think there’s a whole lot more renewables in Puerto Rico, with a resilient rebuilt grid over the next 20 years, and fewer fossil fuel generators,” Higgins said. 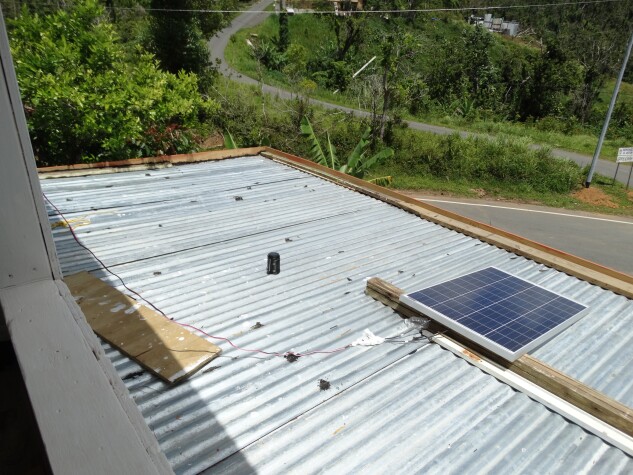 Heriberto Vazquez’s solar panel that he purchased at a local store to help power his home while he waits for electricity to return to his neighborhood in Puerto Rico.
Photographer: Rebecca Kern/Bloomberg Environment

The Solar After the Storm

Maximo Torres, president and CEO of Maximo Solar, a local solar and battery installer in business since 2009, said his business has grown dramatically since Hurricanes Irma and Maria.

Alejandro Uriarte, president and CEO of New Energy, another local solar and battery installer that started in 2007, said his 65-person company has grown its revenue by 25 percent since Maria. He, too, is having trouble keeping up, with an 80-person wait list for a Tesla Powerwall battery to pair with a residential solar system.

“Before the storm there was almost no storage,” he said. He said they installed 10 Tesla Powerwalls between January and September of 2017. Since the hurricanes they’ve installed more than 200 of Powerwalls and 100 Tabuchi Electric Co. battery systems.

“Nobody was looking for storage before the hurricane,” Uriarte told Bloomberg Environment in his San Juan office. “It was very expensive. You really didn’t have any motivation to spend $8,000 or $10,000 on a storage unit.”

A typical residential solar PV system plus battery storage from New Energy costs $20,000 to $25,000, and the company offers financing, he said.

Before the hurricanes, Torres said 20 percent of solar customers had battery storage. Now everyone wants it, he said.

Sunnova Energy Corp., based in Houston, is the largest provider of residential solar on Puerto Rico with 10,000 customers since it entered in 2013. It didn’t install any batteries with its solar systems before the storms. After the storms, it will only install solar and battery systems, and more than 50 percent of existing customers want batteries, Karla Zambrana-Melendez, Sunnova’s general manager in Puerto Rico, told Bloomberg Environment.

“What we have to do is find the right balance between what it takes to keep the grid reliable, what the best use of the land is, where the places are that you can locate renewable resources with batteries,” Higgins, the PREPA chief, said in an interview in his San Juan office.

Higgins said the next steps on the design of the electric grid will be included in PREPA’s Integrated Resource Plan that the utility will send by October to the Financial Oversight Management Board, which is in charge of Puerto Rico’s fiscal plan to get the island out of its $74 billion debt, and the Puerto Rico Energy Commission, which oversees the island’s utility.

A lot of eyes are watching Puerto Rico’s use of solar.

“I hope we don’t don’t lose sight of the big picture that Puerto Rico could go from a challenged electrical system to a world leader given the natural assets that the island has, and solar prices have plunged 80 percent since 2010,” Sen. Angus King (I-Maine), said during a May 8 Senate hearing.

But some customers may not be able wait for PREPA to figure out its grid of the future. They want to generate their own power now.

Victor Gonzalez, president of local solar and battery installer Windmar PV told Bloomberg Environment that while he doesn’t recommend disconnecting from the grid, he sees a lot of frustration.

“Most of our customers are so irritated, they are so upset with PREPA, they are waiting for us to finish their installation so they can go out there with a hammer and smash their power meter,” he said.