Hank Schwedes was driving in heavy traffic near his Morrisville, Pa., home when the car ahead of him suddenly stopped—and to Schwedes’ surprise, so did his.

“I wasn’t stopping quickly enough, so my car reacted before I did,” said Schwedes, who hadn’t known until that moment that his new Subaru Outback was equipped with a futuristic crash prevention system. “It’s a good safety feature.”

The feature relies on information traveling instantaneously to the car’s braking system, the type of data-transfer speed that will allow nascent 5G wireless networks to transform how we work, play, and make money.

But key to delivering data at lightning speed are members of the PFAS family of synthetic compounds linked to health problems and lawsuits. And that’s an issue for some who study the so-called forever chemicals.

“Producing chemicals that don’t break down is a dangerous practice,” said Rainer Lohmann, director of the University of Rhode Island’s Superfund Research Center focused on PFAS.

But the market for fluoropolymers—a subset of PFAS that help equipment deliver data in 5G’s millimeter radio wave frequency—is about to explode, said Anthony Schiavo, a senior analyst with Lux Research Inc., an investment consulting firm focused on emerging technologies.

The fluoropolymers that are most useful in 5G include Teflon chemicals like polytetrafluoroethylene (PTFE), he said.

“PTFE is safe if it’s finished and pure,” said Alan Ducatman, a professor emeritus at West Virginia University, and a witness for plaintiffs alleging injury from PFAS. 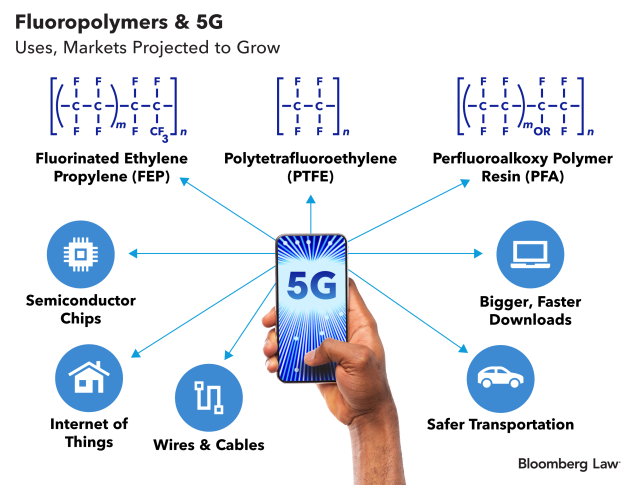 There’s an argument that fluoropolymers themselves pose relatively few problems, Lohmann said. They’re a type of a chemical, called a polymer, whose tightly-bound strings of repeating groups of atoms are too big to get into human cells. In fact, many countries consider polymers of little risk as finished chemicals.

But fluoropolymers are manufactured by using other PFAS chemicals, which can get released during production or years later, when materials containing them degrade, Lohmann said.

“Unless industry can produce fluoropolymers in safer ways,” he said. “They’re a problem.”

They’re also a solution when it comes to equipment that must not fail—in cars, airplanes, spacecraft, military applications, and even health care—said Rigoberto Advincula, a professor at Case Western Reserve University’s department of macromolecular science and engineering.

Fluoropolymers are essential for implantable medical devices like stents and catheters, because they’re so inert they neither harm the body nor let bacteria attack the equipment, he said.

Fluoropolymers’ long lives and resistance to heat and corrosion allow equipment to be safer and last longer, said Advincula, whose research focuses on polymers. And when it comes to 5G, they’re particularly good wire insulators, which helps high-frequency data transmissions get where they’re going.

On the roads, the collision warning-and-braking technology becoming standard in new cars like Schwedes'—many of which rely on parts containing fluoropolymers—has cut rear-end collisions resulting in injuries by 56%, according to the Insurance Institute for Highway Safety.

While not yet available for most Americans, fifth-generation mobile technology promises to move data 25 to 100 times faster than today when fully up and running, said Tim Takala at Daikin America Inc., a fluoropolymers manufacturer.

Frenk Hulsebosch at Chemours Co., which produces PFAS, including fluoropolymers, explained it this way: 5G will let you download a full-length movie—a process that now can take an hour—in only seconds.

, , and are investing heavily as they position themselves to be 5G leaders, according to Bloomberg Intelligence reports. But a lot more infrastructure is needed.

While millimeter waves can carry more data, they travel only short distances. So 5G networks require many small stations to receive signals and send data. And each station needs wires, cables, antenna, and other equipment.

U.S. chemical manufacturers produced about 85,000 tons of fluoropolymers valued at $2 billion in 2018, according to an economic analysis prepared for the American Chemistry Council.

And 5G’s new microwave frequencies “will require a new generation of equipment,” said Bob Traver, an engineer at W. L. Gore & Associates, Inc., which specializes in products made with fluoropolymers.

Three families of fluoropolymers—PTFE, perfluoroalkoxy polymer resin (PFA), and fluorinated ethylene propylene (FEP)—are used primarily for telecommunications equipment. And the 5G market for PTFE-based material alone, in products like printed circuit boards, should grow from next to nothing in 2019 to $350 million a year by 2030, Schiavo said.

Other chemicals competing with fluoropolymers to build equipment needed for 5G include liquid crystal polymers, polyimides, and low-temperature co-fired ceramics, said Schiavo. Yet Teflon has “a really great set of properties” that in many ways make it “ideal.”

The choice to use fluoropolymers isn’t made “trivially,” as they tend to be more expensive than alternatives, said Scott MacLeod, a chemist with UL LLC, which certifies 5G equipment.

Wires and cables used in antenna and other telecommunications equipment must perform in widely varied temperatures, withstand ultraviolet light, provide exceptional electrical insulation, and keep their integrity when exposed to other chemicals, said Chemours’ Hulsebosch.

“There’d be an issue for many technologies” if fluoropolymers weren’t available, he said. “And 5G is just one of those.” 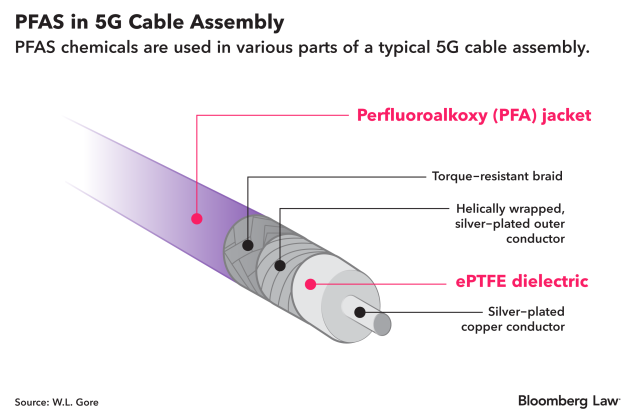 As consumers around the world expect more and faster data, the demand for fluoropolymers will grow, said Jay West, a senior director with the American Chemistry Council.

High hopes for 5G technology correspond with new laws against and litigation around PFAS, which have been found in drinking water supplies around the country.

PFAS are dubbed forever chemicals because sun, weather, and microbes can’t break some of them down. And studies have found the most dangerous PFAS can increase the risk of cancer and weaken the immune system. That’s led to multimillion-dollar settlements and spurred cases against companies making and using the chemicals.

The Environmental Protection Agency on Monday announced it would regulate PFOA and PFOS in drinking water and proposed to require community water systems serving 3,300 people or more to monitor concentrations of 29 PFAS between 2023 and 2025.

Legislators in more than half the states plan to introduce bills this year to restrict PFAS.

And on Capitol Hill, Rep. Debbie Dingell (D-Mich.) says she’ll reintroduce the PFAS Action Act, which would require the EPA to set cleanup standards and enforceable drinking water limits for at least some PFAS. The House passed the measure last year, but it died in the then Republican-controlled Senate.

A core for officials is whether to regulate the thousands of different PFAS chemicals en masse; to regulate them in groups, based on similarities; or to address them each individually, based on their specific properties.

“One-size-fits-all regulatory approaches to PFAS could restrict access to fluoropolymers and in turn inhibit development of 5G technology, as well as a host of other critical uses like medical applications and renewable energy solutions that people across the world rely on,” said West, with the Chemistry Council’s Performance Fluoropolymer Partnership.

“Fluoropolymers have very different properties than other commercially important PFAS and should be evaluated and regulated based upon their own characteristics,” he said.

But “any use of fluoropolymers is concerning,” because of the PFAS released before and after their production, said Jamie C. DeWitt, an associate professor at East Carolina University, who has testified on behalf of plaintiffs in lawsuits alleging harm from PFAS.

Anna Reade, a staff scientist with the Natural Resources Defense Council, said a middle ground might make more sense. “Scientists aren’t saying ban all uses of PFAS now. We’re asking for society to take a look at how we use them, look if they are essential for the safety and functioning of society, and whether there are alternatives.”

Schwedes, the driver of the car whose technology helped him avoid a crash in the fall of 2019, said, “It’s a cost-benefit analysis, at least to me.”

“The biggest costs that I’d like to avoid are environmental costs,” he said. “If these turn out to be highly toxic, we should probably find another chemical that does the same thing.”